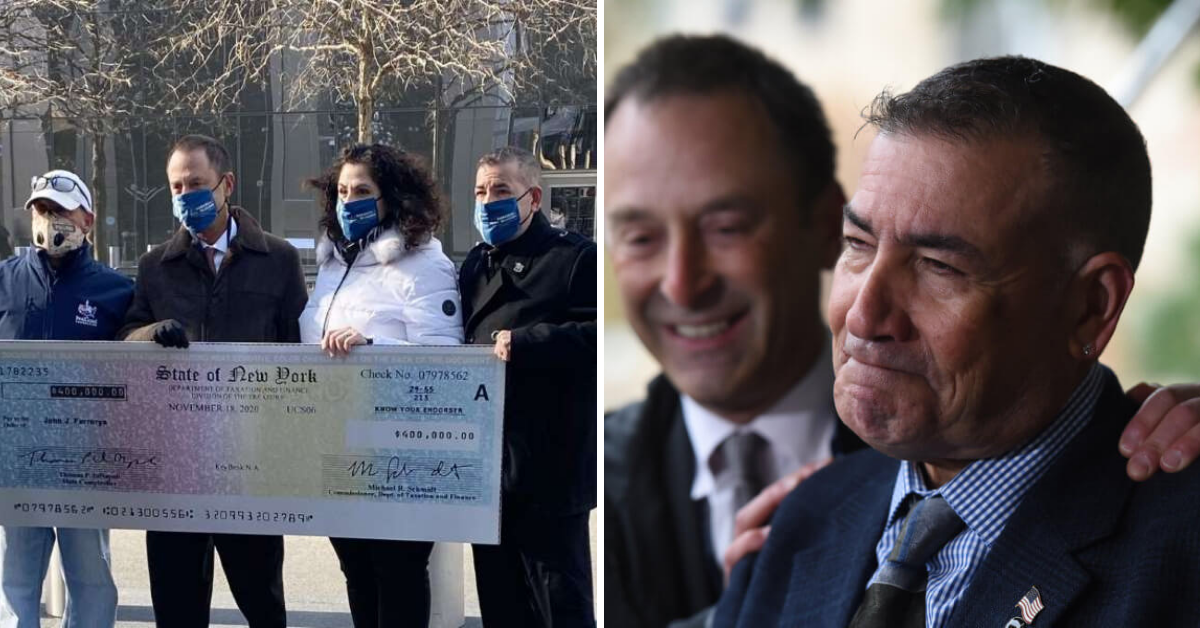 The world will never forget the bravery and sacrifice of the first responders on 9/11 – but nearly two decades later, many have lost their lives to illnesses related to the toxic matter they inhaled – and many others are sick and suffering.

One such hero is cancer survivor John Ferreyra, who was scammed out of a million dollars by a fellow former NYPDer (turned lawyer) who he thought was a friend.

But Ferreyra was just awarded a check for  $400,000 by the New York State Lawyers Fund, and things are looking a little less hopeless.

“I am both humbled and grateful to finally receive (nearly) half of the award that was given to me for my disabling 9/11 illness,” said Ferreyra, diagnosed in in 2005 with non-Hodgkins lymphoma.

“It is my hope that no other member of the 9/11 community, or anybody else, ever has to experience what my family and I went through.”

The lawyers’ fund exists to help people who are victimized by scamming lawyers, much like Gustavo Vila, who pleaded guilty to stealing 90% of Ferreyra’s check from the Sept. 11 Victim Compensation Fund.

Vila stole all but $100,000 of Ferreyra’s $1 million check, and then used the money to pay his taxes and give money to his family. In fact, Vila wasn’t even a legal attorney – he was actually disbarred for grand larceny in 2015.

Ferreyra has suffered multiple surgeries and chemotherapy, as well as radiation and a stem cell transplant. And even when relief was near in the form of that check, it still was an ordeal.

“It’s inexcusable to steal from anyone, but to target and prey upon a 9/11 hero in this way is a despicable betrayal not of just John Ferreyra but of all those who have sacrificed their health and lives working to rebuild following the attacks,” said 9/11 survivors advocate John Feal.

Feal presented the $400,00 check to Ferreyra with attorney Michael Barash. “I could simply not stand by when I heard John’s devastating story, realizing he was being victimized again,” said Barash. “This was a betrayal of trust, plain and simple.”

Life can be fair sometimes

These heroes of the attack on the World Trade Center should be honored and respected — not taken advantage of. Thankfully, in the end justice was (mostly!) restored and Ferreyra got money he so richly deserved.