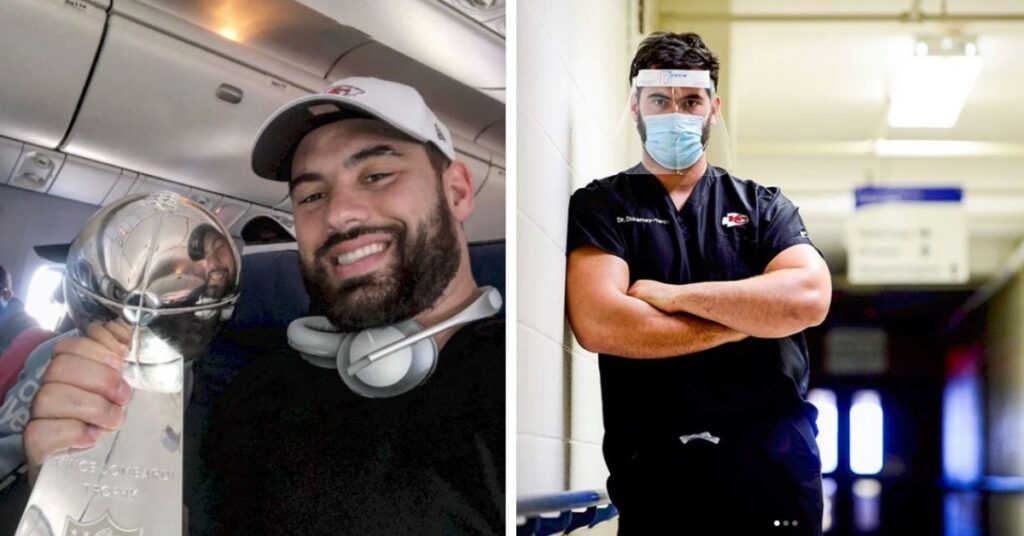 Offensive lineman Laurent Duvernay-Tardif missed the season that took his team to their second Super Bowl in two years to work as a doctor in a Montreal hospital.

And despite his team’s chance to win it all again on February 7, he’s at peace with his decision to help others.

He opted out due to COVID-19

Laurent Duvernay-Tardif blocked for Chiefs quarterback Patrick Mahomes when their team won the Super Bowl in 2020, but when it came time to go for a repeat, he became the first NFL player to opt out of the season due to COVID-19.

“This is one of the most difficult decisions I have had to make in my life but I must follow my convictions and do what I believe is right for me personally,” Duvernay-Tardif said on Twitter.

“That is why I have decided to take the opt-out option.”

“If I am to take risks, I will do it caring for patients.”

He was on the frontlines

Before Duvernay-Tardif was drafted by the Chiefs in the sixth round, he studied medicine at McGill University in his hometown of Montreal.

When the pandemic hit, Duvernay-Tardif rushed home from a sailing trip in the Caribbean and volunteered to pitch in however he could. He was placed in a long-term care facility where he tended to patients who didn’t have coronavirus.

Since he hadn’t studied enough to be a full-on doctor, he did work that nurses do, like drawing blood, administering medications, and even feeding and bathing patients. He only worked a few days a week, but that’s all he could manage emotionally.

“I was working there two to three days a week, and I don’t see how I could have done more,” he told The Washington Post.

“Not necessarily from a scheduling standpoint but from an emotional standpoint. Those people that are there for the past 20 years, it’s crazy. I have so much respect for them. … The amount of sacrifice is unbelievable. I feel like I’m going to be a better physician down the road because of that experience. I understood what it was all about.”

Duvernay-Tardif recalled one young patient who had been in a terrible accident and due to COVID-19 protocols hadn’t been able to see family in months. Duvernay-Tardif noticed how not seeing his loved ones was hard on the patient, so he told him: “Come on, let’s find your wife’s number.”

He used his phone to call the man’s wife on FaceTime and when the couple saw each other’s faces for the first time in two months, they cried.

“You cry, too,” Duvernay-Tardif said. “What else is there to do?”

“The definition of what it means to be a hero changed because of those people.”

At peace with his decision

Despite the inherent risks of a football season — and the infections some teams, including his own, faced — Duvernay-Tardif always agreed that a season should take place, if only to simmer down the fierce political divisions in the United States. And it’s been hard to watch as his teammates reached the pinnacle of their sport yet again.

“It was never black or white,” he said of his decision to opt-out. “As the season progressed and the stakes are higher, I do miss football even more, especially now with the playoffs. There’s more than one way to look at it, and it’s not always simple.”

Duvernay-Tardif, who lost millions in contract money during the skipped season, wouldn’t say he has no regrets, but he is at peace with his decision.

“I felt it made sense to make that decision, in order to look back at 2020—five, 10 years from now—and be proud of myself,” he told TIME. “I’ve said no to money and the NFL season in order to care for patients.”

While Duvernay-Tardif is planning a long career in the medical field, he does hope to return to his team next season.

“I feel like something was taken a little bit away from me,” he said. “I still have some football left in me. I can be a doctor for the next 40 years. I still have the passion, and that’s why I’m working out on my patio at –15°[C].”

You can’t help but be in awe of Duvernay-Tardif, who is not only risking his career in the NFL, but also his own health being around a hospital taking in COVID-19 patients.

His sacrifice is yet another reminder to follow health guidelines and get vaccinated so we can bring an and to this pandemic and everybody can return to doing what they love.

It’s also a poignant testament to living with integrity, according to your own values and definition of success and excellence.

How I Went From High-School Drug Dealer to Startup Millionaire | Gerard Adams | Goalcast
YOU CAN ACHIEVE ANYTHING YOU WANT | Vice Admiral Bono Motivational Speech | Goalcast
Neuroscientist: TRY IT FOR 1 DAY! You Won’t Regret It! Habits of The Ultra Wealthy for 2023
Do Whatever It Takes – The Story Of The Young Man And The Guru