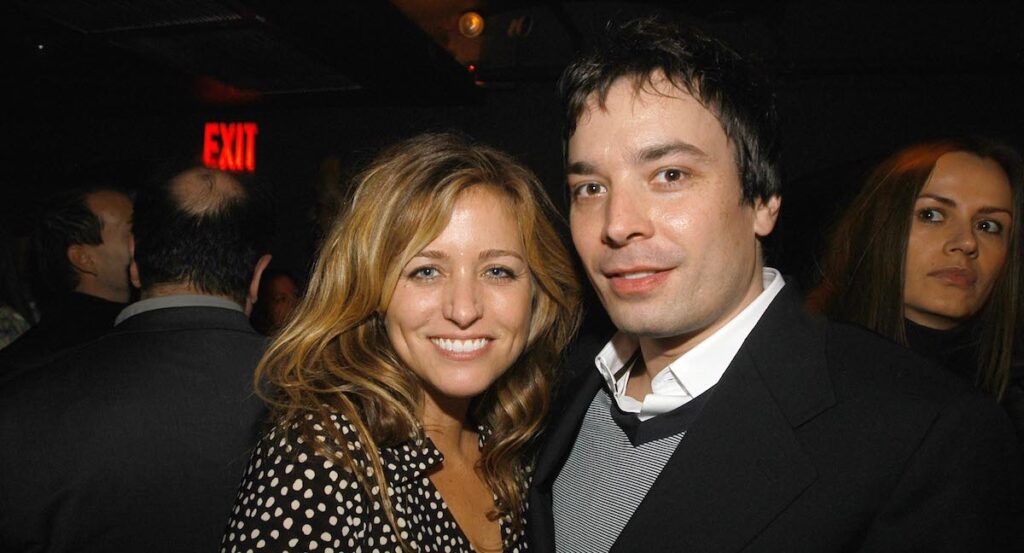 “Happiness is a choice.” That’s the mantra that has driven producer Nancy Juvonen’s life and inspired all those around her, including best friend and business partner Drew Barrymore who explained the mantra to Good Housekeeping. “It’s not the word ‘happiness’ that’s so powerful. It’s the word ‘choice!’” the actress began. “Happiness is not this yellow, blithe, floating thing. It’s something that takes a tremendous amount of work,” she noted. “You’ve got to fight for it. And only when you’ve got that kind of earned happiness is it really good.”

As Barrymore shared, Juvonen has always “loved the word ‘happiness’ so much” that it’s driven most of her decisions, leading to a successful career in Hollywood and a happy, long-lasting marriage to funnyman Jimmy Fallon. The pair have built an unbreakable bond on humour and joy and there’s plenty we can all learn from their laugh-filled relationship.

Who is Nancy Juvonen?

Nancy Juvonen may not be as widely known as her husband (in fact, you may not even recognize her name), but she is very much a Hollywood heavyweight. Her career in film began when she met Drew Barrymore on the set of Mad Love back in 1993 (Juvonen’s writer/producer brother, Jim, was working on the movie) and they formed a bond that has lasted decades. The pair hit it off so well, in fact, that in 1995, a 27-year-old Juvonen and 19-year-old Barrymore decided to go into business together, launching their own production company, Flower Films. They haven’t parted ways since and the company has produced pretty much all of the actress’ blockbuster projects, from Never Been Kissed to Charlie’s Angels and Whip It.

As Juvonen admitted on The Tonight Show in 2020, she “had no producer experience” when she joined the biz, but she’s done incredibly well for herself. As of March 2021, her net worth was an impressive $20 million.

Before launching her Hollywood career, the California native was a true jack-of-all-trades. “I had experience working on a dude ranch in Wyoming,” Juvonen told her hubby on the show, listing her many previous careers. “I cleaned houses in San Francisco. I was a flight attendant for a while. Oh, I thought I could cure all homelessness at one point with this artist […] lost money on that one for sure,” she quipped. She also had a very brief run as an actress, landing two bit parts on the big screen: Flight Attendant in 2001’s Donnie Darko and Store Supervisor in 2004’s Down to the Bone.

Nancy Juvonen knows a thing or two about romantic comedies — she’s produced so many with pal Drew Barrymore! — and, as it turns out, her own love story reads like a rom-com script.

Reminiscing about the couple’s courtship on an April 2020 episode of The Tonight Show: At Home Edition, Juvonen revealed that she first met her future husband on the set of SNL when she snuck in to watch him and Barrymore rehearsing a sketch. “I kind of crept in quietly and all of a sudden Jimmy goes, ‘Hey, Nancy! You’re Nancy? Hi, it’s so nice to meet you, welcome!’” she recalled. That friendliness and desire to make her feel comfortable instantly caught her attention.

I felt just so embraced and cool, like, ‘Thank you! Thank you for welcoming me in. This is so nice.

Jimmy Fallon and Nancy Juvonen were then reunited on the set of 2005’s Fever Pitch, which starred Barrymore and Fallon and was produced by Flower Films. “We were [shooting] on location and that really creates this, like, camp feel for everybody,” Juvonen explained, noting how that relaxed environment allowed them to get close without pressure or expectation. “We got to just sort of flirt and hang out and get to know each other without having to go on a date,” she said.

We got to just be pals and have crushes which is so hard, and so fun.

In addition to being drawn by the fact that Fallon “was just so friendly and fun and welcoming and he loved music,” Juvonen admitted she “really developed a crush” when she saw how good he was with kids. As she told viewers, she and Fallon would happily play with co-producer Bradley Thomas’ kids whenever they came to set and “I think that’s when my heart just sort of melted even more.” The late night host also shared fond memories of that time, gushing, “You were just so fun! We had so much fun, didn’t we?!”

They know what really matters, and what doesn’t

Once filming on Fever Pitch wrapped, Jimmy Fallon and Nancy Juvonen weren’t sure what would happen. It wasn’t until they were reunited in London on a business trip that they realized how much they had missed each other and they finally went on their first date.

Fast-forward three years and Fallon popped the question in August 2007 and they said “I do” just four months later in an intimate ceremony on Richard Branson’s Necker Island. Both the couple’s engagement and their wedding were unforgettable, but as they’ve since shared, each milestone came with a bump in the road that could’ve easily derailed a couple. Luckily, they’ve always known what’s important, and what isn’t.

The Tonight Show host first had to learn to roll with the punches when he was forced to scrap his initial proposal. As he shared in 2018, he was ready to get down on one knee when Juvonen visited him in New York in early 2007, but when she surprised him with dinner plans, he had to act fast. “I didn’t want to propose in Per Se [restaurant] because what if one year it moves locations and years later I’m going to have kids and go, ‘Your mom and I got [engaged here]. I know it’s a laser tag place but at one point it was a very fancy restaurant,’” he explained of his decision to hide the ring and find a better occasion.

Said occasion came three months later when they were vacationing at Juvonen’s family home on Lake Winnipesaukee in New Hampshire. But even that didn’t go perfectly. Fallon planned a romantic engagement on the dock, but despite his best efforts not to cry, he “immediately” started weeping and Juvonen had the perfect response. “She’s like, ‘Are you having a stroke?’” Fallon laughed.

As for why they tied the knot so quickly, that was another case of making the most of the situation at hand. During a Q&A segment on a May 2020 episode of The Tonight Show: At Home Edition, Juvonen recalled how they were both busy working while trying to plan a big wedding and it simply wasn’t making them happy. “I had to go immediately start production on a film, on He’s Just Not That Into You, and as I’m doing that and you’re doing something else […] we’re making these lists, and lists, and lists of people and I’m like, ‘I don’t have any time,’” she said.

We kept trying to talk to these wedding people and they wanted to talk about napkins and things we just could not have cared less [about] on any level.

So when they learned they could tie the knot at their dream destination — Necker Island — if they acted fast, they jumped at the chance. “Jimmy goes, ‘What if we got married in three weeks instead of next summer?’” Juvonen recalled. “And I’m like, ‘This is the best idea of all human time.’ So we had 12 people at our wedding. I just got a dress done as fast as I could. Some people are still mad,” she laughed.

Despite the rush, the December 2007 nuptials were perfect because they had everything they needed: each other. “Man, we had a rager time. It was so much fun,” Fallon gushed while she joked, “It was the best wedding I ever had.”

Jimmy Fallon and Nancy Juvonen never give up

Jimmy Fallon and Nancy Juvonen’s ability to tackle all of life’s unforeseen developments was truly put to the test when they embarked on an incredibly difficult, heart-wrenching journey to parenthood.

As Fallon shared with Today in August 2013, he and his wife went through an “awful” five-year struggle with infertility before finally turning to surrogacy. “It’s just really depressing,” he admitted, but they never gave up. Sharing the importance of perseverance, he said, “If there’s anyone out there who is trying and they’re just losing hope, just hang in there. Try every avenue; try anything you can do, ’cause you’ll get there. You’ll end up with a family, and it’s so worth it. It is the most ‘worth it’ thing.”

Which is exactly what he and Juvonen did as they maneuvered the hardships together and in July 2013, they welcomed their first child, daughter Winnie Rose, followed by little sister Frances Cole Fallon in December 2014.

For Jimmy Fallon and Nancy Juvonen, it’s all about honesty — and laughter

Jimmy Fallon and Nancy Juvonen have been happily married for over a decade and when fans asked the couple to share their secrets to wedded bliss, Juvonen wasn’t afraid to get real. “My answer’s almost unromantic, but I don’t mean it to be unromantic,” she said during a June 2020 segment of Ask the Fallons. Getting candid, she advised:

You don’t have to like every single thing the same, but you kind of have to have the same values in a way.

What’s more, you have to be honest with yourself — and with each other. “The things that matter a lot to you, I wouldn’t compromise a lot on,” she said, adding that denying your true self to impress someone who’s a complete opposite will become “a struggle after a while.” She continued, “When you’re dating you’ll do anything for that person, and then as you really are together and come together, you hopefully get more real.” That’s when “those truths come out and they can really pull the rug out from under people, depending on what they are, so be honest.”

Laughter is also key. “Keep your sense of humor,” she advised, pointing out that having a similar sense of humor “is fun because then you laugh together at the same stuff.” She concluded, “And I think keep some independence. Neither of you should be so reliant on the other.”

If “happiness is a choice,” it’s one that both Jimmy Fallon and Nancy Juvonen have made over and over again. Yes, their love story could easily inspire a rom-com, but it hasn’t always been easy and it’s by focusing on what’s really important (their relationship), supporting one another through the hard times, and laughing together that the couple has been able to enjoy 13 years of marriage and counting.