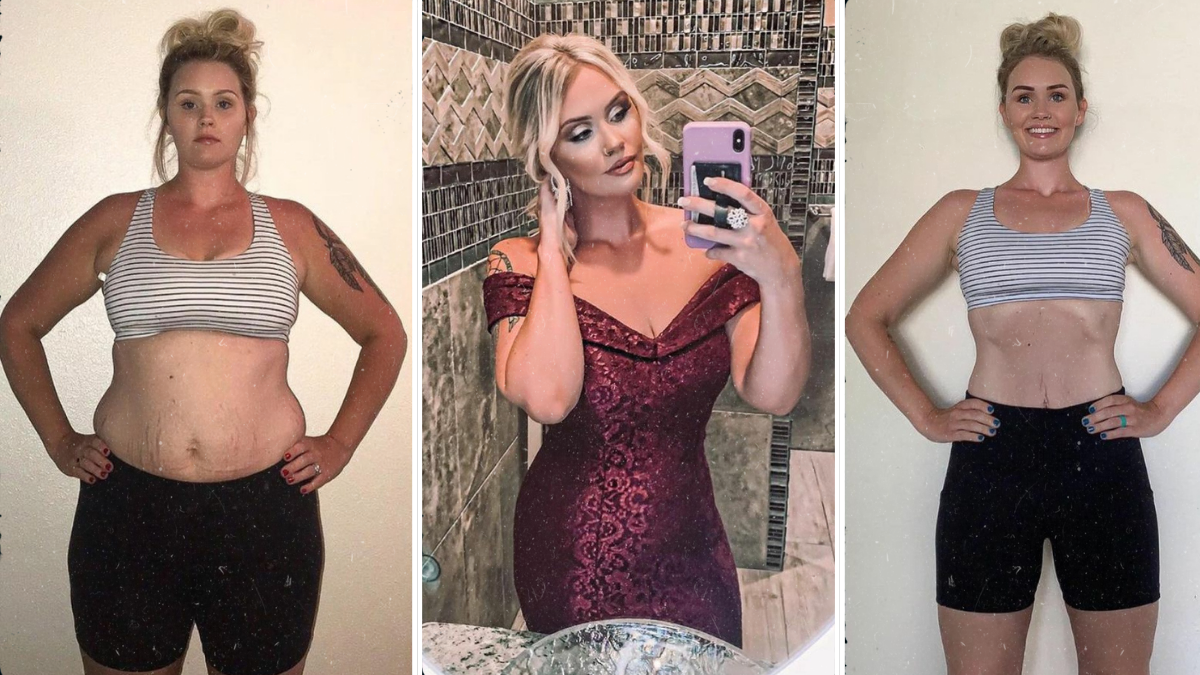 Kassidy Riekens is the definition of perseverance and hard work.

Depression can manifest itself in many different ways for different people. When you’re unhappy, sometimes coping mechanisms can overlap with destructive behaviors. For Kassidy Riekens, 29, alcohol and fast food were her comforts and vices of choice when her depression set in. But after she had her first child and she tipped the scales at 260 lbs, Riekens knew something had to change.

Kassidy began to gain weight in 2010 from daily binge drinking and junk food eating. She used to drink, smoke and eat fast food to cope with her depression, without worry about what was going into her body. The drinking was at a point where her husband would have to care for her when she was drunk.

Then the Riekens had their first child together in 2014 and Kassidy reached her peak weight of 260 lbs after the birth. It was then that she knew she needed to make a change. The necessary shift in her lifestyle choices began two weeks after giving birth to her firstborn.

Kassidy explains, “What brought on my weight gain was terrible food choices, drinking alcohol, and neglecting exercise. It was a cycle that I was stuck in. I did the same thing every single day. I would eat fast food and junk, get drunk at night, and sit around doing nothing with myself.”

Kassidy is happy with her decision to overhaul her lifestyle saying, “I decided to lose the weight two weeks after I delivered my daughter and never have looked back.”

It feels amazing being sober. My drinking was getting out of control. I was leaning on alcohol to mask my depression, mask my feelings, mask my physical pain, and mask the world.

In total, Riekens lost 129 lbs. She did this by going for daily walks or jogs and by changing her eating habits.

On life without alcohol, Kassidy says, “It feels amazing being sober. My drinking was getting out of control. I was leaning on alcohol to mask my depression, mask my feelings, mask my physical pain, and mask the world.”

Kassidy reflects on her decision to quit drinking saying, “I was drinking often which is terrible for you not only physically but mentally too. I would act irrational and do things that weren’t like me. I was never clear-headed and constantly asking for forgiveness when I would mess up, which was often. I didn’t ever want my kids to see me act like that or my husband having to take care of me while drinking. It was embarrassing and not who I wanted to be. So, I quit cold turkey.”

Ultimately, Kassidy wants to motivate others to transform their lives in positive ways. She says, “I want others to realize that despite the struggles we are constantly facing, it is possible to succeed at something if you put your mind to it. I think people think they’re limited to things that they’re actually not. The sky is the limit and it’s going to be hard! But I can’t thank myself enough for pushing through. It changed my life in ways I could’ve never imagined. It’s made me who I am today and I’m proud of that person.”

Kassidy has given birth twice since having her first daughter in 2014. Every time she has given birth she has recommitted to her weight loss journey. Riekens shares that journey publicly on Instagram, where she has also shared that she recently gave birth to a newborn daughter. She also shares that she is embarking upon the weight loss transformation process yet again and is ready for the challenge.

I struggle every single day, whether it be with the actual pain or the worry about what if the pain is worse tomorrow. I’ll be mid-workout, and literally feel like I am being stabbed and have to stop. But instead of throwing a fit and storming out, I get up, move to a different exercise, and keep going.

Despite also being diagnosed with rheumatoid arthritis, an autoimmune disease that causes joint inflammation, Kassidy continues to push through. According to Riekens, “I struggle every single day, whether it be with the actual pain or the worry about what if the pain is worse tomorrow. I’ll be mid-workout, and literally feel like I am being stabbed and have to stop. But instead of throwing a fit and storming out, I get up, move to a different exercise, and keep going.”

Kassidy was so inspired by her fitness journey that she became a certified personal trainer and certified nutrition coach. Her goal is to bring out the best in others by helping them be “the best version of themselves.”

Kassidy’s motivation to change came from her daughter

Kassidy has said that during one period, “It got to the point that whenever I would look in the mirror, I wasn’t able to find anything beautiful about myself.” When she recognized that, she thought of her daughter and said, “I wanted her to look up to me and admire me, so I changed myself.”

Kassidy’s love for her daughter overpowered her desire to continue living an unhealthy lifestyle. She got the wake-up call she needed on the scales after her daughter’s birth and changed her life around for the better. Recognizing when your habits no longer serve you is an undervalued skill. Kassidy’s ability to find the willpower to transform her life is a reflection of her ability to recognize when it is time for a change. Without that moment of clarity, a shift is unlikely to follow suit.

It got to the point that whenever I would look in the mirror, I wasn’t able to find anything beautiful about myself.

Transforming your life is a process that requires you to take it one moment at a time. It can be tempting to self-medicate for depression and various mental health issues, but ultimately it is not the way out. Dealing with your issues and tackling them head-on is how to get out of an undesirable situation. Recognizing reality for what it is and what you need to do to get to where you want to be is a process that takes time. That time is priceless if you gain greater quality of life and years on your life as well.

At the end of the day, you are the only person who can fight your own demons. You can lean on others for support, but the spiritual heavy lifting has to be done by ourselves. Every person’s life looks different, and yet we all face struggles. Make sure to be kind to yourself along the way but also to be brave enough to confront problematic patterns of behavior. The person who loses the most from a state of ignorance to your own personal problems is the same person who has the most to gain from a state of awareness, yourself. Open your eyes to the areas that challenge you most and need change and open up the possibilities to living a more full life.

Do Whatever It Takes – The Story Of The Young Man And The Guru
How I Went From High-School Drug Dealer to Startup Millionaire | Gerard Adams | Goalcast
YOU CAN ACHIEVE ANYTHING YOU WANT | Vice Admiral Bono Motivational Speech | Goalcast
How Your EGO Is Ruining Your Life | Gaur Gopal Das | Goalcast
Neuroscientist: TRY IT FOR 1 DAY! You Won’t Regret It! Habits of The Ultra Wealthy for 2023