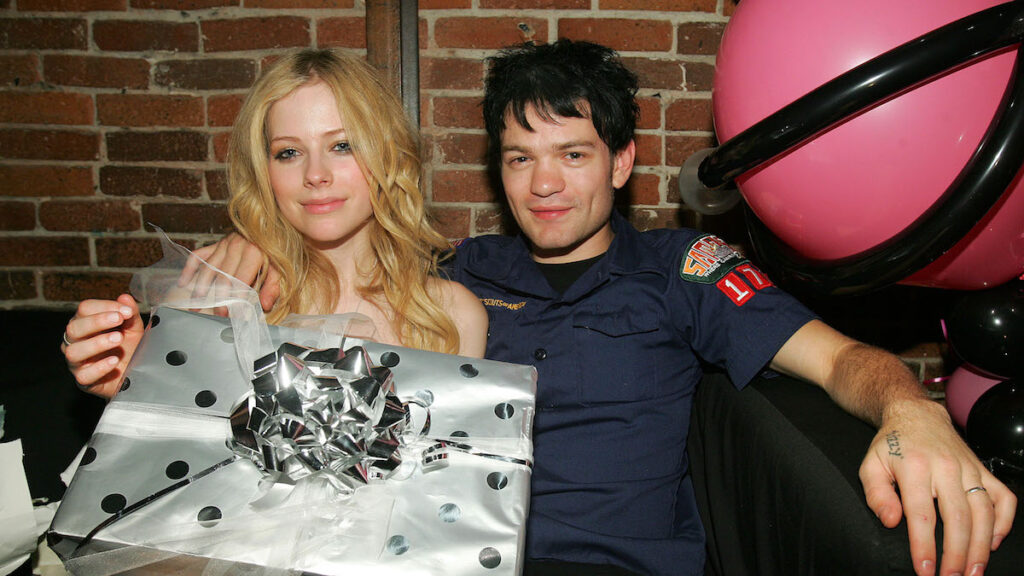 Avril Lavigne has built an entire career out of singing angsty breakup tunes, but she’s not really keen on being ‘Complicated’ with her exes.

It’s safe to say that the Canadian singer hasn’t had the best luck with love in recent years. She’d been married and divorced not once but twice in her twenties. She had to take time off to battle her Lyme disease. Not to mention a ludicrous conspiracy theory that posited that she had died sometime in the 2000s and been replaced with a body double.

The 36-year-old certainly has a lot on her plate, but she’s not letting her frustrating past take control of her attitude. If anything, she looks back on her failed relationships with a glass-half-full perception and doesn’t hold any bitterness towards her former husbands.

Her enthusiastic approach towards her divorces gives us something to aspire for in our own lives.

Avril’s first husband, Deryck Whibley, is “family” to her

Avril’s first marriage was to Sum 41 lead vocalist Deryck Whibley. She met him at a bar when she was just 17 and made out with him the same night. The two officially started dating two years later. In June 2005, Deryck swept the singer off to Venice on a surprise romantic trip and asked her to marry him. She said yes, and the two tied the knot on July 15, 2006, in Montecito, California.

The first years of their marriage were more content than Avril could have ever imagined. The Sk8er Girl said in an interview that she was the “best thing that’s ever happened” to her husband and ever shared she’s been helping him stay off of drugs. “We have a really good, strong relationship. There’s a lot of trust,” she told Jane Magazine a year into marriage.

Unfortunately, it wasn’t meant to be. The Girlfriend singer filed for divorce on October 9, 2009. Even then, she was eager to maintain an affectionate bond with her husband. “I am grateful for our time together, and I am grateful and blessed for our remaining friendship,” she said in a statement.

Avril and Deryck have been spotted together on multiple occasions post-divorce. In fact, they’ve been photographed so many times over the years that gossip blogs even tried to spread rumors about a possible reconciliation. This couldn’t be further from the truth. Just because they have a well-functioning friendship doesn’t mean that they’re on the cusp of reuniting as lovers. It’s possible to appreciate someone just for the memories or company — a friendship doesn’t have to signify a romantic connection.

In 2014, Deryck announced that he was seeking treatment for his alcoholism. Avril released a statement of support and mentioned that she had visited him in his time of need.

I’m proud of him for taking this step. I love Deryck very much. He’s family to me. He’s a good guy, and I want him to be happy and healthy and what he did was to let his fans know to drink responsibly.

Avril’s marriage to Nickelback frontman Chad Kroeger ended even more amicably than her first marriage. Funnily enough, the night she met Deryck for the first time was the same night she encountered Chad for the first time as well — which is a coincidence that only fate could have cooked up.

It took nearly ten years for Chad and Avril to reconnect with one another and pursue a romance. Sparks flew uncontrollably when they started working together on Avril’s fifth studio album, Goodbye Lullaby. In fact, their feelings were so powerful and undeniable that they decided to get engaged just a month into their relationship. Their wedding nuptials took place at a medieval castle on the Mediterranean in the South of France on July 1, 2013.

No one knows how or why the marriage deteriorated. No one even suspected that their marriage had been on the rocks until Avril announced their separation on September 2, 2015. As was the case with Deryck, Avril was assertive about maintaining a friendship with her husband. “We are still, and forever will be, the best of friends, and will always care deeply for each other,” she wrote. She also added that she and Chad have created “unforgettable moments” through both their music and marriage.

Avril revealed in February 2019 that she collaborated with Chad on the production of her sixth studio album, Head Above Water. He delivered vocals for the title track and even lent his studio to Avril when she needed to record. More importantly, he was just a constant “soundboard” for her in that she would just shoot over new music to him if she wanted an opinion or if she was stuck on a particular part. He was always encouraging and commended his ex-wife for her hard work and creativity. “[Chad] just cares about me and wants to see me do well, which is really nice,” she told USA Today.

In the same interview, Avril had no qualms reaffirming her friendship with both Deryck and Chad. She stated that once you marry someone, you don’t just attach yourself to their life —you attach yourself to their interests, friends, and families. You can’t just dissociate from them by force. Unless the relationship concluded on incredibly unpleasant, irreparable grounds, there’s no reason to break it off with your exes and reject the idea of a friendship.

This is especially interesting coming from an artist who’s known around the world for her angsty breakup anthems. You’d expect her to badmouth her former beaus in her songs, but she keeps it clean and instead appreciates her exes for inspiring her sound. It highlights her growth and subverts the public’s expectations. Just because she used to scream obscenities at her exes at 17 doesn’t mean she’ll be disgruntled her whole life.

[My exes] are just good people. We had marriages, we lived together, I knew their families, they knew mine, we just stayed close and there’s a mutual respect.

Friendship is the best gift you can give to others

Not all relationships are equal, and some will have nastier endings than others. And ultimately, it’s up to the parties involved to determine how they want to interact with one another for the rest of their lives. Avril demonstrates that it’s not possible but actually more fulfilling to preserve good relations with your exes. Deryck and Chad might not have been the best fits as husbands, but they more than compensated for it with long-lasting friendships.

Avril teaches us that we should always go the extra mile when it comes to dealing with our exes. The awkwardness doesn’t matter as long as you remember what brought you together in the first place: each other’s company. Obviously, it can be difficult to maneuver the new dynamic, but as long as it keeps the toxic elements at bay, you should never turn your back on friendship.