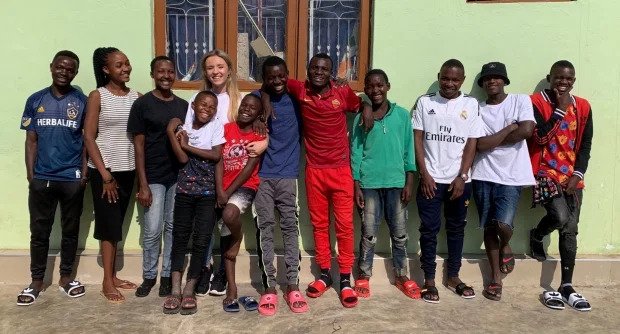 When most people undertake a gap year abroad, they expect a wealth of life-changing experiences, friends, and work opportunities. However, rarely do they picture creating an entirely new legal family. This is exactly what occurred when a young British woman decided to take a gap year and go volunteering right after school.

Letty McMaster didn’t expect her life to change as she was volunteering across several locations in Africa. But throughout her travels, she came across children that were being mentally and physically abused in orphanages or in the streets. Thus she set out to make a difference in their lives the only way she knew how to.

Letty was only 18 when she came across the abused children

According to The Sun, Letty was only eighteen when she decided to fly to Africa to complete a month of volunteering. She had just completed her A-Level exams and was planning to return home to attend university. However, she witnessed the kids at the orphanage being abused both physically and emotionally. They were underfed and kept from attending school, as education funds given to the orphanage were used up by the staff themselves.

As a result, tons of kids would escape to the streets, which in turn jeopardized their safety and wellbeing. Letty also thinks “voluntourism and white saviourism” also played a part in worsening the situation for these children. Therefore, Letty knew she had to do something on her own.

Her month-long volunteering trip ended up being three years, as she stayed behind to ensure that the children in the orphanage were looked after and supported. When the orphanage shut down in 2016, Letty knew that she had to arrange a home for the nine children facing homelessness. That’s why she formed a charity called Street Children Iringa that would house the children. Over the months, she also opened her doors to five other children that she found struggling in the streets.

Though Letty is only twenty-six at the moment, she feels like she’s a full-time parent to the fourteen children. She’s a lot more than their legal guardian — their family home takes care of everything from food to medical costs to educational opportunities. Letty said about her new role:

I am the parental figure in the house – some of the little boys who never had a parent view me as their mum but most see me more as a big sister as I’m not that much older than some of them.

Letty also updated the publication on how the children have evolved over the years after being found in despicable situations. For example, Eliah, who was found on the streets after his mom had died, is now an accomplished pupil at his school. Fred, meanwhile, had been found by the sewage line, having not eaten for days; he is now training to be a footballer at a prestigious academy.

Other kids include Iddy, an aspiring boxer, and musician; Eva, a chairperson at her university; Gosberth, a top student in his private school, and Razarlo, who’s studying to become a tour guide.

Letty lives in Iringa, Tanzania for nine months every year; the remaining months are spent back in the UK where she continues to raise funds and awareness about her mission. In some ways, it’s very much a typical family, said Letty.

When everyone comes home from school, they’ve all got their own stories to share and homework, football training and music commitments. It’s a family home all the way.

You have the power to change someone’s life

Letty’s actions prove that we all hold the power to change someone’s life in our own little way. Letty has dedicated her entire life to the wellbeing of these children. She’s continuing to find other children in the streets and help them however she can. Outside of the family home, she also has a safe house that attends to street children and provides them with food, shelter, and other materials. Her mission in life is to help unhoused children in a variety of ways. Sometimes it means bringing home children into her family, sometimes it means providing basic necessities when needs arise.

While we might not all approach our work in the same way Letty does, we need to realize that we also have resources, time, and money that can be better spent to bring happiness into someone else’s life. Furthermore, as Letty had warned, there are many unintended consequences to volunteering, so it’s crucial to keep track of whether our help is truly benefiting someone and whether our preferred organization is actually providing aid to others. Finally, Letty’s newfound family shows us that just because a family is unconventional doesn’t mean it’s any less valid or meaningful. At the end of the day, it’s all about love, care, and respect. If you’ve got those ingredients, you’re on your way to creating your perfect little (or big!) family.

Parents issue warning after teen dies from inhaling aerosol deodorant
Food inflation: Shoppers turn to saving hacks long used by older Canadians
How to Make Things Better When It Seems Like Everything Is Going Wrong
Woman Finds Her Elderly Neighbor Living in a Destroyed House – Decides to Takes Matters Into Her Own Hands
Sweet Revenge: Woman Wins Lottery Jackpot After Husband Leaves Her for Best Friend