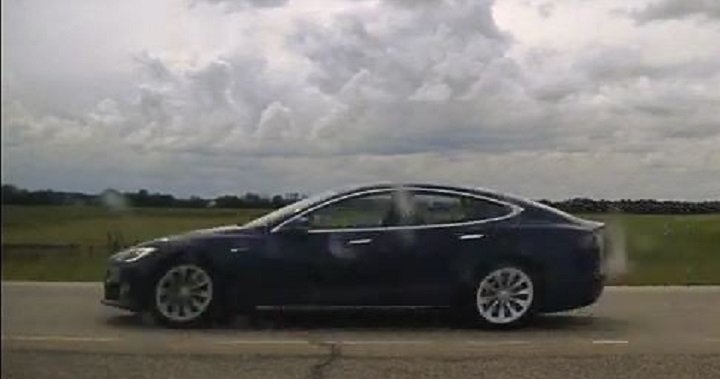 In what Canadian legal experts are calling an unprecedented case, a B.C. man has been charged with dangerous driving in Alberta after he was allegedly caught sleeping in a self-driving Tesla as it sped south on Highway 2 between Edmonton and Calgary this past summer.

On top of the criminal charge, Cai is accused of speeding and RCMP said he also received a 24-hour licence suspension for fatigue in connection with the alleged July 9 incident, in which drivers and police noticed a 2019 Tesla Model S operating with no driver in sight.

Witnesses claim the man behind the wheel and his passenger were asleep with their seats fully reclined, as their Tesla travelled up to 150 km/h on the freeway near Ponoka, which is about 100 kilometres south of Edmonton and 200 kilometres north of Calgary.

“I don’t know that I’m aware of any other case in Canadian law ever where somebody has been asleep in a self-driving car that has been charged with dangerous driving,” the Acumen Law lawyer told Global News.

Teslas have an autopilot feature meant to assist alert drivers — but the cutting edge safety technology has been subject to abuse.

“They still come with the responsibility of driving.”

Global News reached out to Tesla to confirm whether the American electric vehicle company considers it safe for drivers to use the self-driving mode while they are asleep in the driver’s seat — and if Tesla’s autopilot feature can safely take over for drivers who don’t keep their hands on the steering wheel.

When asked what the current regulations are around self-driving vehicles, and to what extent the use of autopilot features is allowed on public roads and highways, Transport Canada told Global News that the CAV systems or “advanced driver assistance systems” presently available in vehicles feature low levels of automation.

“These technologies assist drivers, but do not replace them,” said the statement from the federal institution responsible for transportation policies and programs – and drivers must still adhere to the rules of the roads in provincial, territorial and municipal jurisdictions.

In Nov. 2019, ICBC told Global News that B.C. laws do not permit driverless vehicles on roads and that “the driver is responsible for the operation of the vehicle including when driver assistance is activated.”

When asked how self-driving vehicles are currently regulated in our province, the Ministry of Transportation recommended we contact Transport Canada.

It added that it is actively monitoring the development of autonomous vehicles as they are tested in B.C., in work that “will take time as the technology improves and advances, and as Transport Canada develops criteria for these vehicles.”

Provincial motor vehicle acts don’t address self-driving vehicles and Transport Canada regulations are lacking, said Lee, who hopes this case will inspire government to consider either prohibiting or allowing the use of self-driving features.

“It will be one of the first times that self-driving features of cars are considered by courts at all, ever,” Lee told Global News.

“That’s going to lead to, I think, really important decisions from the court about what a driver’s obligations are in self-driving mode that could inform the way that future legislation addressing this is drafted.”

Leran Cai’s driving history in B.C. includes a driving while prohibited charge in Richmond in March 2019. He was later convicted of the lesser offence of driving without a driver’s licence and handed a $1,000 fine.

A ticket for violating a driver’s licence restriction in Richmond in Jan. 2020 was deemed not to be disputed, which is what happens if a person fails to appear for a court hearing or appearance.

Cai is also accused of speeding in Monte Creek, B.C. this past February.

Cai’s next court appearance on the Alberta dangerous driving charge is scheduled for Jan. 29, 2021 in Ponoka.

How to Show Up When Nothing About Your Life Is Perfect
All the Things I Didn’t Tell the Men I Dated Because I Was Afraid
New Barbie Doll Honours First Black Aviator — Inspires Youth to Take to the Skies (PHOTOS)
Femcels: Inside the enigmatic subculture of involuntary celibate women
How a social media group dubbed Mom Jeans is helping people fight inflation