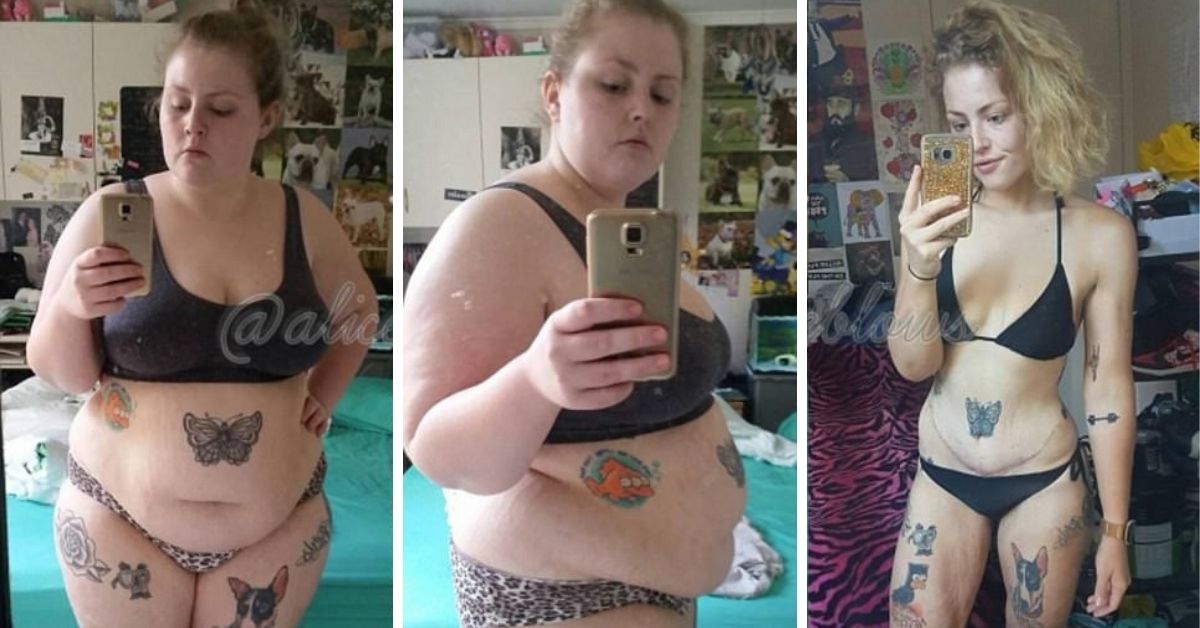 Alice Toleman knew she was running out of options after a surgeon told her that if she didn’t get a handle on her food addiction, she’d be lucky to live past 30.

“My food addiction was something I hid from almost everyone, especially my family and close friends,” she wrote on her blog.

She hid her problem from everyone

Alice, from Melbourne, Australia, was in her teens when she started binge eating, and over the next several years, her weight spiraled out of control.

“To this day, most people don’t know the extent of my addiction. I’d sneak off to the supermarket, convenience stores, milkbars – anywhere I could access and stock up on lollies, chips, biscuits and chocolates,” she remembered.

She’d often lie to her parents about going out for healthy meals with friends on weeknights when instead, she’d take herself to McDonalds and eat an entire Family Box on her own.

A family box consists of four burgers, four large fries, nuggets and four soft drinks. I’d sit there at McDonalds on my own and enjoy my feast, giving into my addiction.

She always kept a “stash” in her room which for Alice became like a safe space.

“My favorite thing to do was sit in my room alone and stuff my face until I couldn’t move, roll over and have a nap and repeat the process when I woke from my food coma,” she recalled.

It wasn’t uncommon for Alice to lie about being busy so she could stay home and eat, and whenever she did go out with friends, they usually ended the night at McDonalds – which was her favorite part.

“I thought it was normal to live like this,” she said.

She needed to see that it was possible to change

Alice thought she was just dealing with emotional issues like everyone else, without realizing how self-destructive her behavior had become.

That was until she started a new course in 2015 and met a girl in her who’d been successful in losing a lot of weight. After finding out her classmate lost over 200 pounds by undergoing gastric bypass surgery, combined with healthy eating and exercise, she began warming up to the idea.

“Now having seen the results first-hand, the idea of bariatric surgery seemed like an option for me more and more over the coming weeks,” she said.

Her GP had recommended weight loss surgery the year before, but she turned it down. This time, she felt inspired by her new friend and finally decided to meet with a surgeon for a consultation. That was when, for the first time, Alice realized she was morbidly obese.

The surgeon told me if I was to continue my lifestyle like this, I’d be lucky to live past 30 years of age. This was a huge shock to me and I felt had no other option but to book in for a gastric bypass, which I booked for October 2015.

But she still felt like a prisoner of her addiction…

“I wanted nothing more than to change but my addiction flatly wouldn’t let me.”

She found comfort in the surgeon’s reminder that “weight loss surgery isn’t an answer, it’s merely a tool. You need to respect your tool and work with it to get the results you want.”

“By this point, I had exhausted all other options – exercise, psychology and psychiatry, and everything else in between, I knew very well it was the only option I had left,” said Alice.

At 21, she underwent the procedure, which helped shrink her stomach and reduce her appetite. As a result, Alice had to develop a healthier relationship with food and she began exercising regularly, while working on her mindset.

“[The surgery] basically rearrange my guts and make my stomach smaller to assist me with food portions and alter how my body absorbs nutrients,” Alice said.

“I’m never going to hide the fact I had weight loss surgery because it saved my life and I’m not ashamed to admit I had some assistance with my weight loss journey.”

Now, her relationship with food couldn’t be healthier

”I don’t count calories, I eat when I’m hungry, I eat until I feel satisfied and I nourish my body with delicious healthy foods,” she said.

“I’ve had to retrain my brain to see and respect food as a source of nourishment and drop the negative associations with food and overcome emotional eating.”

Alice turned to social media to share her weight loss transformation and continues to motivate her nearly 135,000 Instagram followers.

I aim to inspire and motivate, showing people my journey and how I battled obesity and beat it.

Deliveryman Arrives to Pick Up an Order From a Bakery – Breaks Down When He Finds Out Why His Own Name Is on the Package
Parents issue warning after teen dies from inhaling aerosol deodorant
The Single Greatest Mistake A Man Can Make | Jordan Peterson
Beyond Dry January: 5 Benefits of Extending Your Break from Alcohol
‘Gen Z yellow’: Next ‘it’ colour or marketing ploy?