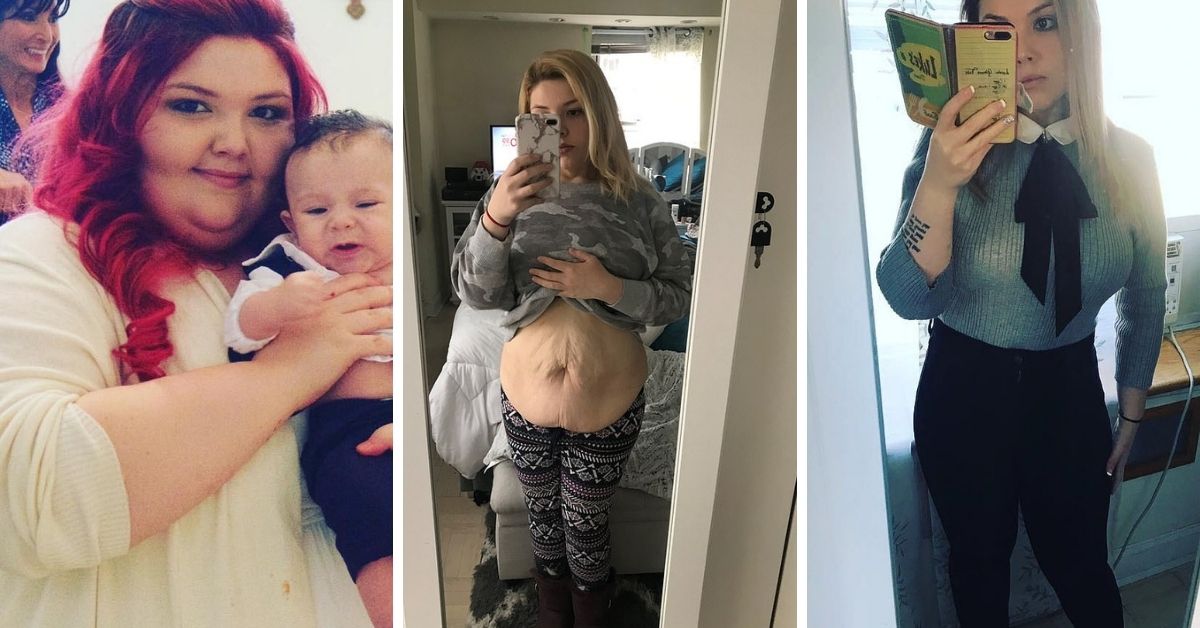 After losing her mom in 2009, Sofia Wyszynski ate her way through her grief and her eating habits quickly spun out of control, up until she gave birth to her son.

“Losing my mother was the hardest thing that ever happened to me,” she told the Daily Mail.

She got sick right around the same time I started struggling with food, and then, by the time I lost her, I was overeating.

Sofia was 8 when she first realized she was bigger than other kids her age because she couldn’t wear cute dresses and had to get larger uniforms.

“I was very aware that I was bigger and that being overweight ran in my genes,” she said.

By the time she turned 18, Sofia weighed nearly 300 pounds.

When I lost her, I felt very empty and angry.

“Filling myself with comfort food, the thing that had always been kept from me, felt like the biggest comfort in the world, and in some way gave me a weird sense of control.”

She knew things had to change when she became pregnant

At 20, Sofia became pregnant unexpectedly and while she experienced conflicting feelings of fear and joy, she knew she wanted to be a mom.

“I promised myself that I would do anything to protect my baby when they were born,” she said.

Only during her pregnancy, Sofia’s eating habits got worse.

“I took the whole ‘eating for two’ idea to an extreme,” she admitted.

“I would eat an entire 500ml tub of ice cream every day and say it was because the baby needed calcium.”

At her heaviest, she weighed 412 pounds.

Sofia gave birth to her son, Lucas, just before her twenty-first birthday.

Looking at my son, the love of my life, I knew something had to change.

Sofia made the life-changing decision to get weight loss surgery

“Having a gastric bypass was the easiest decision I ever made, and following my son, the best thing to ever happen. I knew I needed surgery to save my life, and to give my son everything he deserved,” she explained.

In October 2016, she underwent the procedure which helped kickstart her transformation journey, and she lost 98 pounds within three months.

Sofia put herself on a strict diet that included decreasing her calorie intake and portion control.

“I also added exercise, which at first, was very limited,” she said.

I was so big that I could hardly move. But as I lost weight, I was able to begin both cardio and weight lifting regimes.

Sofia gained back her confidence

The process of reclaiming her health gave her a major confidence a boost, which kept her moving consistently towards her weight loss goals.

“Not only did I like the way my physical reflection in the mirror was changing, but I loved the inner parts of me that were finally able to push through and shine again,” said Sofia.

I had kept so many parts of myself suppressed, like the girl who loved to read and write, to speak up, to try new things. But now I am myself again and still learning how much deeper the real me goes every day.

Sofia knew the final step in her transformation was to have skin removal surgery after she started developing rashes in the folds of her excess skin.

“I was much more nervous for skin removal than for my gastric bypass, even though my bypass was much riskier,” she remembered.

In July 2018, Sofia had a successful combined lower and upper body surgery.

She’s admitted that her weight loss journey gave her a new lease on life and inspired her to go back to school.

“No matter how long you have given up for, you can change. It’s never too late to fix it, but you must start now,” Sofia said.

“You have to want it and fight for it, but if you do, you can have it all. Find the thing that makes the difference, like my son did for me.”

How to Make Things Better When It Seems Like Everything Is Going Wrong
This Year, Let Go Of The People Who Aren’t Ready To Love You
Louisiana Woman Gives Free Wigs to Children Suffering Hair Loss — Their Reactions Will Warm Your Heart
Parents issue warning after teen dies from inhaling aerosol deodorant
Detroit Couple Turn Vacant Lots to Bee Farms – Including the Childhood Home of One Legendary Rap Superstar