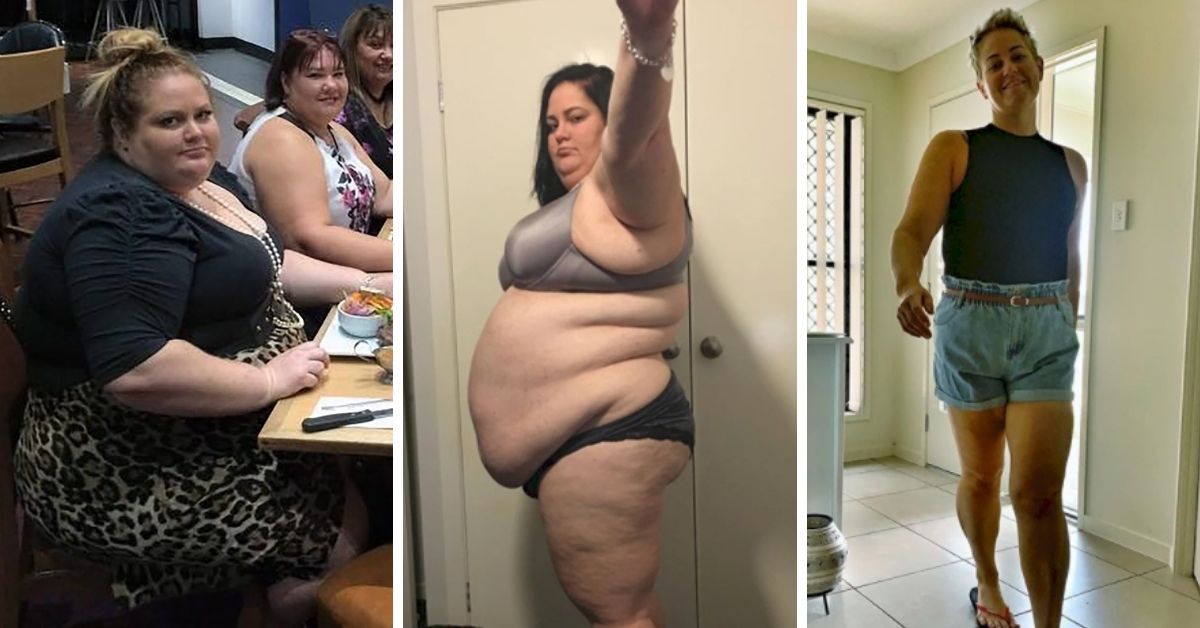 Elle Goodall, of Queensland, Australia, was in denial about her weight for years until she was diagnosed with type-2 diabetes during a routine check-up with her GP.

“He wanted to weigh me, but the scales showed up an error message. I was too heavy for them,” she told New Idea.

That’s when her doctor took her over to an industrial scale which revealed Elle weighed over 400 pounds.

“I couldn’t believe it when the scales read 184kgs and my blood results revealed I had type-2 diabetes. I knew then something had to change,” she said.

Elle knew it was time for a change

Elle wasn’t always overweight. In fact, up until graduating high school, she was a competitive athlete.

“In school I was a big swimmer. I trained for several hours a day, morning and night. When I left at 18, I stopped swimming and that’s when I started to put weight on,” Elle remembered.

Then, she landed a dream job on a boat doing a lot of physical work, and it wasn’t until meeting her husband Aaron in 2007 that her relationship with food started to really get out of hand.

We moved in together and I gave up my work on the boat for an office job. Suddenly I wasn’t moving as much anymore and weight started to creep on.

It started when she’d often find herself too tired to cook after work and stopped to pick up take-out on her way home from work. It was almost always McDonald’s.

“Soon, one takeout a week became three, then it was every day. Our kitchen was barely ever used,” Elle recalled.

It got to the point where she could eat 3 large Big Mac meals and an extra large portion of fries in one sitting.

Over the next several years, she developed a full blown addiction to fast-food, and it deteriorated to the point where she’d get into rages if she didn’t get her “fix” or if her husband Aaron got her order wrong.

“I was so big I was having to buy size 32 clothes online as no stores in the small town had anything I could wear. It sounds crazy but even when I was buying supersize outfits, I didn’t think I had that much of a problem. But the reality was I spent most of my days eating,” Elle admitted.

The diagnosis was a wake-up call

That was until, at 26, she discovered she had diabetes and her doctor warned her that she needed to make some drastic changes if she wanted to live past 35.

Following her diagnosis, Elle tried to lose weight over the next several months but her food addiction always won.

“I tried shakes, medication and exercise but I just couldn’t beat the demons in my head,” she remembered.

“Then one day I was in K-Mart when some kids started following me and making piggy noises. I went straight to my car, cried and drove to Macca’s.”

As I ate the food, I knew then I couldn’t go on like this anymore. Not only had I spent a small fortune on the food, it was ruining my life.

So Elle took a major step

In that moment, Elle decided it was time to transform her life and the next day, she went in to see her GP and booked a gastric sleeve surgery.

“It was the best decision I’ve ever made,” she said.

Within the first week following her operation, Elle lost 20 pounds.

Aaron bought me a pink treadmill and I started exercising at home. It was the first time in years I’d exercised and I couldn’t even run for 30 seconds, but I was determined.

She eventually hired a personal fitness coach, Vicky, who at the time was training for a triathlon, which peaked Elle’s curiosity.

“She turned to me and said: ‘I could have you ready in a month. I accepted the challenge and a month later, weighing 140kgs, I completed my first triathlon. It was amazing.”

Her determination led her to completely overhaul her lifestyle, ditching her McDonald’s addiction and replacing it with a strict raw diet and daily workouts.

Not only that, but her initial triathlon curiosity has turned her into a decorated triathlete. In 2018, she was not only selected to participate in the Ironman World Championship, her dream event, but also to be an ambassador for it.

“Competing in an ironman is something most normal people would never do, let alone people who had been overweight. I’ve had to really work for this. It still surprises me that I can do it and that’s what I’m proud of.”

Elle’s story proves that, no matter what your starting point is, there is always a way to accomplish the impossible.

How to balance social expectations and your budget amid inflation: ‘It’s OK to say no’
How to Make Things Better When It Seems Like Everything Is Going Wrong
The Choice We All Have , But Only a Few Apply It | Joe Dispenza
Beyond Dry January: 5 Benefits of Extending Your Break from Alcohol
Slow mornings lead to deliberate days