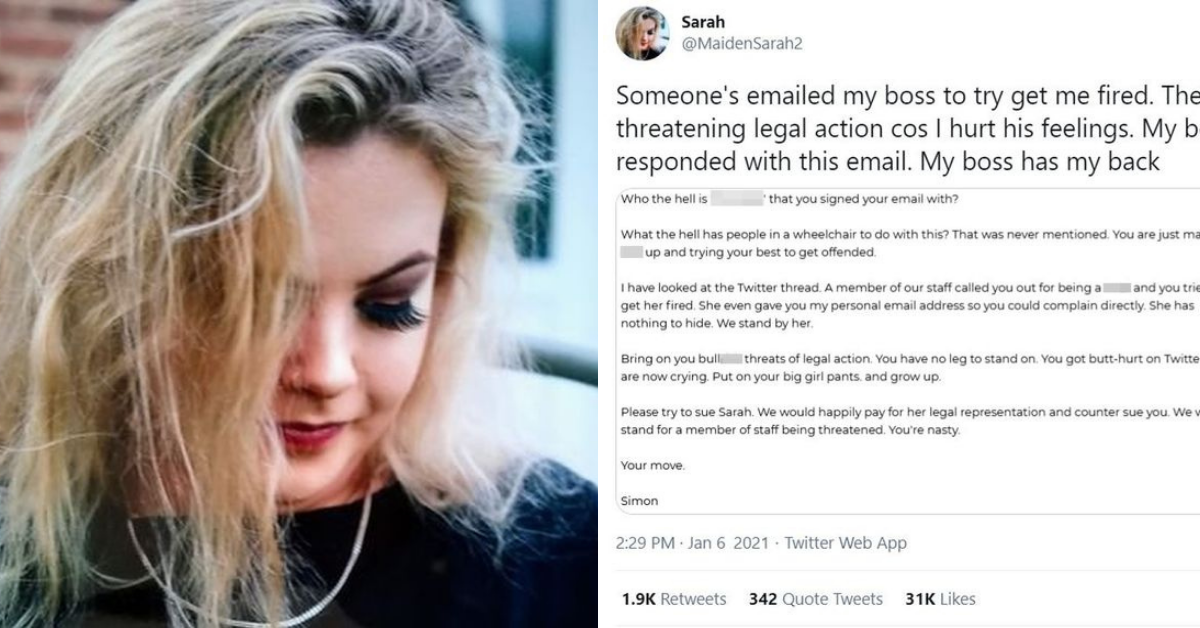 When a boss got an email pleading for an employee to be fired over a Twitter spat, he did something extraordinary — he took his employee’s side.

When a customer has a problem with an employee, the usual thing to do is to ask to speak to a manager. Sometimes the manager disciplines the employee or fires them. That was not the case here.

Viking Beard Company tweeted that they’d no longer be able to ship retail orders from the United Kingdom to the European Union due to paperwork and custom costs as a result of Brexit.

One Twitter user responded that if they can’t “fill out some paperwork” they don’t deserve him as a customer.

A Viking employee named Sarah proceeded to lose her patience with the critic, calling him out as a “f*****g w****r,” according to Mirror UK.

The outburst put Sarah in a 12-hour Twitter timeout, but the upset complainer wouldn’t stop there. Sarah said he sent her boss four emails in the space of an hour, demanding her to be fired or they’ll take “legal action.”

But the boss, Simon, wasn’t having it. He accused the customer of trying his “best to get offended,” and said “we stand by [Sarah].”

“Bring on your bull**** threats of legal action. You have no leg to stand on,” Simon allegedly wrote in an email shared on Twitter. “You got butt-hurt on Twitter and are now crying. Put on your big girl pants and grow up.”

Someone’s emailed my boss to try get me fired. They’re threatening legal action cos I hurt his feelings. My boss responded with this email. My boss has my back. pic.twitter.com/XyUaDPbM79

As for the complainer, they allegedly deleted their account.

Ha! Keyboard Brexit warrior has deleted his account after being burned!

He’s the one who earned our beloved @MaidenSarah2 a 12hr ban after she handed him his a*se on a plate yesterday.

Bosses don’t have to be awful

Sure, it’s a boss’ job to manage their employees and dish out bad news when needed. But a boss doesn’t have to be a Scrooge.

If your employees enjoy working with you, and get along with you, there’s a good chance they’ll work harder. They’ll probably be more honest with you too.

So build up your relationship with your employees and defend them if needed. You never know when you might be the most beloved boss that goes viral on Twitter.