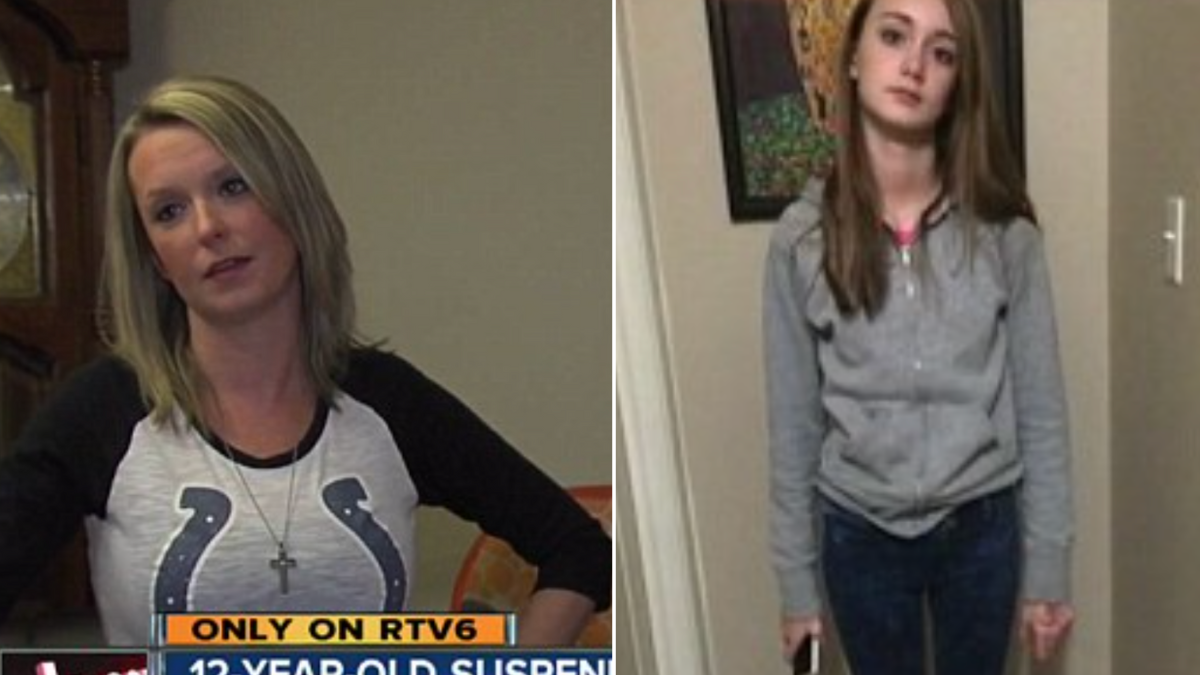 Traci Hull of Indiana was at work when she received an email that knocked her off her chair. It was from her 12-year-old daughter Morgan’s school. Per the Daily Mail, they said that she was given an ‘internal suspension’ for violating the school dress code. Her attire offense? Wearing stretchy pants.

Yet per the school’s email, Morgan was only supposed to get a warning. To make matters worse,  when she took Morgan to school the next day, she was again sent home due to her pants.

That was enough motivation to cause this mother to come undone and take action.

Hull stormed ​​Franklin Township Middle school and asked to speak with leadership. There, she met the assistant principal, who said again that her daughter’s pants were too tight and couldn’t attend class.

What bothered Hull the most is that her daughter is missing class. She said: “She is behind in school and we are spending now two days focused on pants that are too tight. It is unfathomable to me that there is this big of an issue on her dress code and not her education”

RELATED: Daughter Falls Off Skateboard – The Brilliant Way Her Dad Reacted Should Be a Lesson for All Parents

Hull later tried but was unable to get a sit down with the superintendent.

However, one of the employees who worked at the school said that Morgan’s outfit was just fine, and said that the whole case would be reviewed.

In a statement released after, Dr. Flora Reichanadter, school superintendent, cited keeping a ‘safe’ environment in enforcing the dress code.

“There are and will be times in which some styles of clothing are not appropriate or conducive to the school environment and should be kept as an option outside of school,” she said.

Traci added that Morgan had been wearing the same pants all year – and had success with her studies – and that it had only recently become an issue. She’ll look for pants that conform to the code as it all gets sorted out.

Yet, she added that it’s easier said than done.

“She is extremely petite, so trying to find clothes that fit her is difficult. I just don’t think it’s appropriate to send her to school in sweatpants. It’s dumbfounding, I just don’t get it,” she said.

RELATED: Single Mom Expects 6-Year-Old Son to Do Household Chores – The Reason Why Is a Lesson for All Parents

We’ve yet to see a news story about a school under threat from a surge in tight pants. What we do see on the rise are students who are deprived of their education due to rigid uniform policies like this and other cases.

Some might call this a case of a mother overreacting, yet the stats say otherwise. Per one study, the poverty rate for high school dropouts is more than twice those that get their degree.

That’s not saying that a girl’s future is at risk from a pair of stretchy pants. However, we can all agree that it’s hard enough to keep kids engaged in school. Maybe, as one mother is saying, we should worry more that their butts are in classes instead of the right-fit pants.

Now that’s among the smart goals we should all get behind.

Deliveryman Arrives to Pick Up an Order From a Bakery – Breaks Down When He Finds Out Why His Own Name Is on the Package
Quordle: Hit Wordle-style game finds B-U-Y-E-R in Merriam-Webster
Domino’s Employee Delivers a $12 Order – But the Unusual Tip He Received in Return Takes Him by Surprise
7 Ways Childhood Trauma Shows Up in Your Romantic Relationships
Sweet Revenge: Woman Wins Lottery Jackpot After Husband Leaves Her for Best Friend