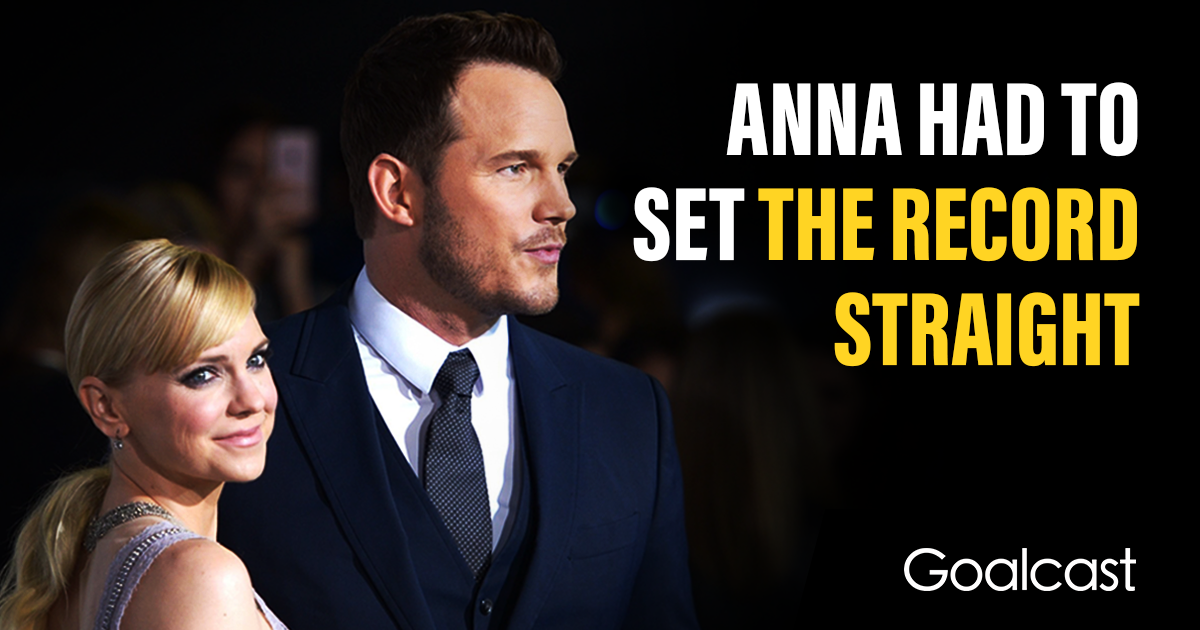 Anna Faris and Chris Pratt were one of the most charming, beloved couples in Hollywood for a while. With Chris Pratt’s breakout with Guardians of the Galaxy and Anna’s subsequent comeback through a starring role on Mom, they were on their way to becoming one powerful pair. They spawned their own set of fans who rooted for their love and swooned at their picture-perfect state of happiness.

The dream, however, ended in December 2017 when the pair announced that they were heading to splitsville. Breakups are normal, but since these individuals are in the public eye, we tend to form a deeper connection with them.

I think that it’s a lesson learned in keeping relationships a little more private, potentially, even though I pride myself in being a pretty open person. But, I don’t know, it’s tough when you’re under scrutiny.

Therefore, Chris and Anna’s separation caused a lot of people to jump to conclusions. It didn’t matter that they weren’t privy to the details of their divorce and what may have precipitated their rift. If they were invested, they likely picked a side.

Thankfully, Anna Faris never shies away from setting the record straight. She has been candid about the full range of what divorce entails and the visceral emotions associated with it. Through her pain, frustration, and wisdom emerges a number of lessons that we can apply in our own lives.

Anna Faris learned that she needed to keep her relationships private

Anna and Chris decided to confront their divorce head-on. They’d been married for eight years when they realized that it wasn’t working out, and it’d be for the best if they went their separate ways. Unlike other uber-private couples who choose to keep the public guessing on their marital status, Chris and Anna released a public statement declaring that they “tried hard for a long time” and are really “disappointed” at the outcome.

In the same statement, they affirmed their love for their son Jack and also their “deepest respect” for one another. Anna talked about the divorce on a radio show and said that the disintegration of her second marriage stirred up a number of resolutions on her part, the first being that she needed to be more private with her life.

I think my mom was always trying to reiterate: Value yourself, value yourself. We talk about that on the podcast a lot, about how women tend to not have strong egos as men and don’t really prioritize themselves.

It’s a dilemma that’s stumped and exasperated many celebrities over the years. They’ve all had to wonder whether the widespread fame, success, and wealth was worth the 24/7 scrutiny from both the public and the press.

In 2013, rumors were circulating that Chris was having several illicit affairs while filming Jurassic World. The couple did their best to avoid the barrage of lies, but the idea of having their personal lives sensationalized and exploited to sell gossip made them uncomfortable. In her podcast Unqualified, Anna said about the rumors, “It made me feel incredibly insecure. Chris and I, we talk about this a lot. We grapple with a lot of the ideas of being a public couple.”

As a result, the need to maintain privacy has become a priority for her going forward, even though it would mean going against her natural tendencies.

In the same interview, Anna was asked what “self-sufficient” love means to her. Post-divorce or following the dissolution of any co-dependent relationship, a lot of people have to evaluate their identity all over again. You might have been with one person for so long that it’s foreign and probably unseemly to be by yourself.

Being self-sufficient and having the tools you need to take care of yourself is vital to surviving and thriving on your own, whether it’s for a few days or a few years. Anna elaborated on her stance in the interview, saying that she didn’t have a lot of confidence in her appearance or personality growing up.

Any hint of competitiveness and comparison, I didn’t handle that very well, I don’t think. And I hope I’ve grown from that.

So if anyone “remotely attractive” decided to pay her a lick of attention, she crumbled and became “completely smitten” with him. She sought validation from men to appease her sense of self-esteem and relied on their attention to feel like she mattered. It’s an impulse that’s been conditioned in a majority of women, so it’s rather an uphill battle to break away from that.

In her podcast Unqualified, Anna recently clued the fans in on a possible reason why her marriage with Chris didn’t go the distance. She said that it was “competitiveness” that often encroached upon their balance. Given that both of them were in the same profession, it’s natural that some level of competition would creep in, but Anna said that she specifically had an issue with overcoming the rivalry and the bitterness. She was a proud individual — always reluctant to reveal vulnerabilities.

Even though Chris and Anna aren’t married anymore, they hold nothing but love for one another. Chris is happily married to Katherine Schwarzenegger, whereas Anna is engaged to cinematographer Michael Barrett. They continue to co-parent their eight-year-old and support each other however best they can. Anna revealed that Chris even called her to give her a heads-up before proposing to Katherine; she added that she loves them both and is “just so happy that they found each other.”

Grudge-holding is not something that Chris and I do… So, we wanted to make sure, of course, that [our son] Jack was happy, but that we were happy and supportive of each other and that we could have this fantasy idea of, do we all spend Christmas together? Do we all vacation together?

Find yourself first before finding others

The significance of self-love and self-sufficiency cannot be overemphasized. You need to find yourself first before you can begin to look for a partner. Relationships can fade and end, but your sense of self never budges. If you lose yourself in the tensions of a relationship, your true self will keep slipping away from your grasp, and before you know it, you’re struggling to get back on your feet at the end of the day.

At the end of the day, you need to be mindful about how much you value yourself within your relationship. Anna learned the hard way that you can never prioritize self-love enough. Being sufficient for yourself and being enough for yourself is going to be far more fulfilling in the long run than the temporary thrills of a new romance.