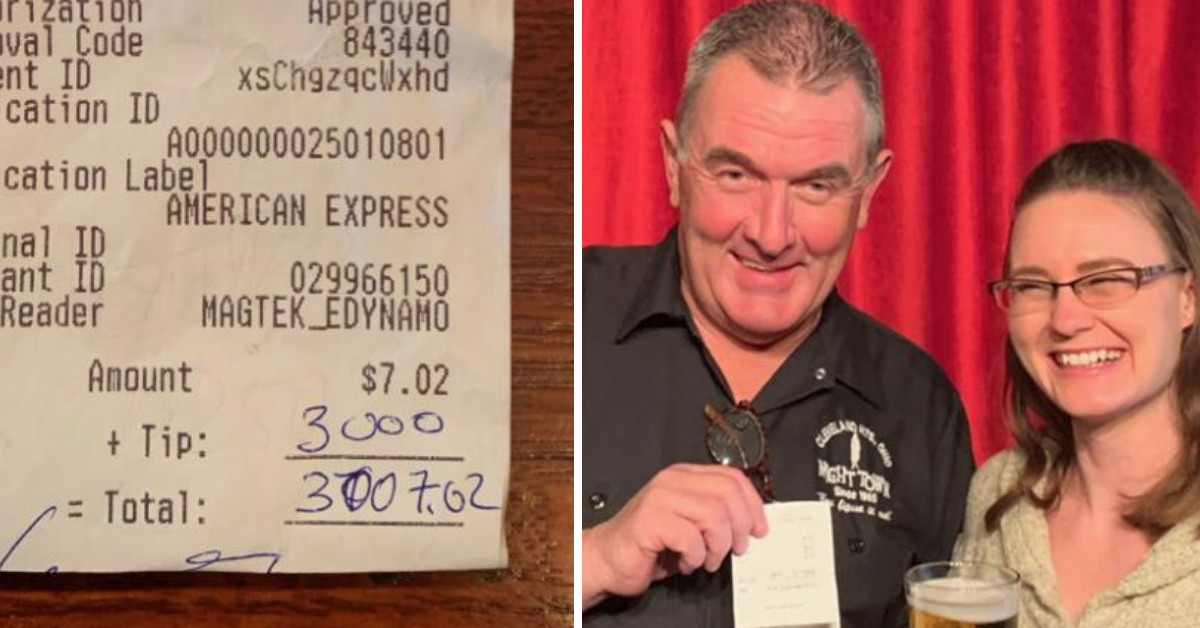 This year, more than ever, we all could use some holiday cheer.

An anonymous stranger certainly did his part to put smiles on the faces of staff members at a Cleveland restaurant when he gave them a $3,000 tip on a $7 bill.

A $7 pint with a jaw-dropping tip

Sunday, November 29 was the last day of service at Nighttown, a staple local restaurant in Cleveland, Ohio. Owner Brendan Ring decided to shut down until January as the state’s cases of COVID-19 continued to skyrocket – and the last day of business was a busy one.

“We got kind of busy on Sunday with a lot of our regulars coming in since it was our last day,” Ring told CNN.

Then, a semi-regular customer came in and walked up to the bar. “[He] ordered a pint of Stella and he took a couple of sips out of it and said to the manager, ‘Can I just get my check?’”

The man, who wished to remain anonymous, quickly filled out the check and brought it over to Ring’s table. He told him to share it with the servers and then, like in the movies, walked away.

“He said, ‘Good luck to you guys and we’ll see you when you reopen.’”

A mistake? A joke?

He ran outside after the customer to make sure he didn’t make an error.

“He said, ‘No, that’s what I intended. Share it with the staff, good luck to you guys, Merry Christmas and we’ll see you when you come back.’”

When Ring returned to the restaurant and told his staff, one of the servers thought he was joking – Ring had that kind of reputation at Nighttown.

“The next server I showed it to, she started crying, she knew it was legit,” Ring said.

Along with Ring, the four servers working that day got $750 from the tip.

An outpouring of love

Ring told CNN he was in disbelief with not only the generosity of the anonymous client, but also how viral the story has become.

Ring said his sister back in Ireland, where he is originally from, even saw the story in the newspaper.

“We’re all so desperate for uplifting news, if this was a normal year, yeah, this would be a good story, but it’s a great story because of the year we’re in,” Ring said. “The outpouring of love for this story has been universal.”

You see stories of people leaving huge tips from time to time, and they’re always heartwarming. But it feels even more significant this year considering how tough the pandemic has been for the restaurant industry.

If you can and have the means, this story is a reminder to give to those who’ve helped carry you through this year. Whether that’s supporting your local restaurant, calling up a frontline worker you know and thanking them or mailing a gift to a friend or family member who has been there for you.

The World’s Best Blind Mountain Biker | Brian Bushway | #shorts
He Was Fatally Beaten by Memphis Police — Now People Around the World Are Sharing #SunsetsForTyre in His Honor
How I Stopped Feeling Embarrassed and Ashamed of Being Single
Looking for love? 44% U.S. adults use dating apps to find long-term partners: study
The two kinds of productivity advice