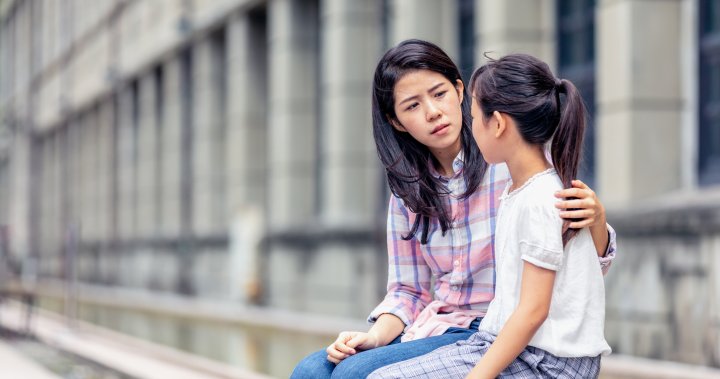 Following the deadly shooting in Atlanta that left eight dead, including six Asian women, Asian people across North America have been speaking up about ongoing anti-Asian racism and violence.

While parts of Canada saw a rise in anti-Asian racism — earlier this year Vancouver police noted anti-Asian hate crimes were up 717 per cent in 2020 — experts say now more than ever all Canadians should be speaking about anti-Asian racism at home.

Mom Cristina Carpio in Toronto and psychologist Gina Wong in Edmonton recently join The Morning Show to talk about having conversations about anti-Asian racism with our children.

Both experts noted racism towards Asian people in Canada isn’t new and as Wong points out, has been rooted in Canadian history for decades.

“There is a long-standing history of hate and racism against Asian individuals going far back as over a century ago,” she says.

“Chinese workers were brought in to U.S. and Canada to build the railway and seen as a dispensable race.”

Read more:
These Asian Canadians are concerned as hate crimes spike in the coronavirus pandemic

Once the railway was finished in 1885, the Canadian government enforced a “head tax” and any Chinese immigrant would have to pay a tax from $50 up to $500. This meant millions of dollars over the next few years.

“In 2006 the Canadian government issued an apology and financial reparation, but there is long-standing history of racism against Asians.”

Carpio and Wong, who are both moms, added that while the history can be heavy, it’s important to start having these conversations with children of all ages.

Carpio says her 16-year-old daughter is troubled by the ongoing news.

“Teens are on social media and it is very hard to shield them from what’s going on and I honestly don’t think we should shield them,” she says, adding that children need to understand the impacts of racism.

“It is so heartbreaking for her to watch elderly Asians on video getting attacked and hearing about Asian kids like her getting discriminated and bullied.”

2:08
Anti-Asian racism rises across parts of Canada, the U.S.

Anti-Asian racism rises across parts of Canada, the U.S.

She says parents have the responsibility to engage in these types of conversations and also find out how their children are reacting and feeling.

Wong says for any parent, Asian or non-Asian, it is important to not be complacent and acknowledge how burned out some parents are.

She adds we should spend time being positive role models to our children and teaching them when to speak up against anti-Asian racism.

She also adds as allies, education is key.

It’s important to learn about sinophobia (hatred against Asians) and understanding self-worth.

“When we teach our children self-worth we are empowering them,” Wong says. “They have their own sense of worthiness, they are more likely to speak out.”

For the full interview, watch the video above.

This Is What Self-Care Really Means, Because It’s Not All Salt Baths And Chocolate Cake
Parents issue warning after teen dies from inhaling aerosol deodorant
Year of the Rabbit: Canada’s animal shelters urge not to adopt bunnies on a whim
7 False Beliefs That Will Keep You Trapped in Your Head Forever
How to balance social expectations and your budget amid inflation: ‘It’s OK to say no’