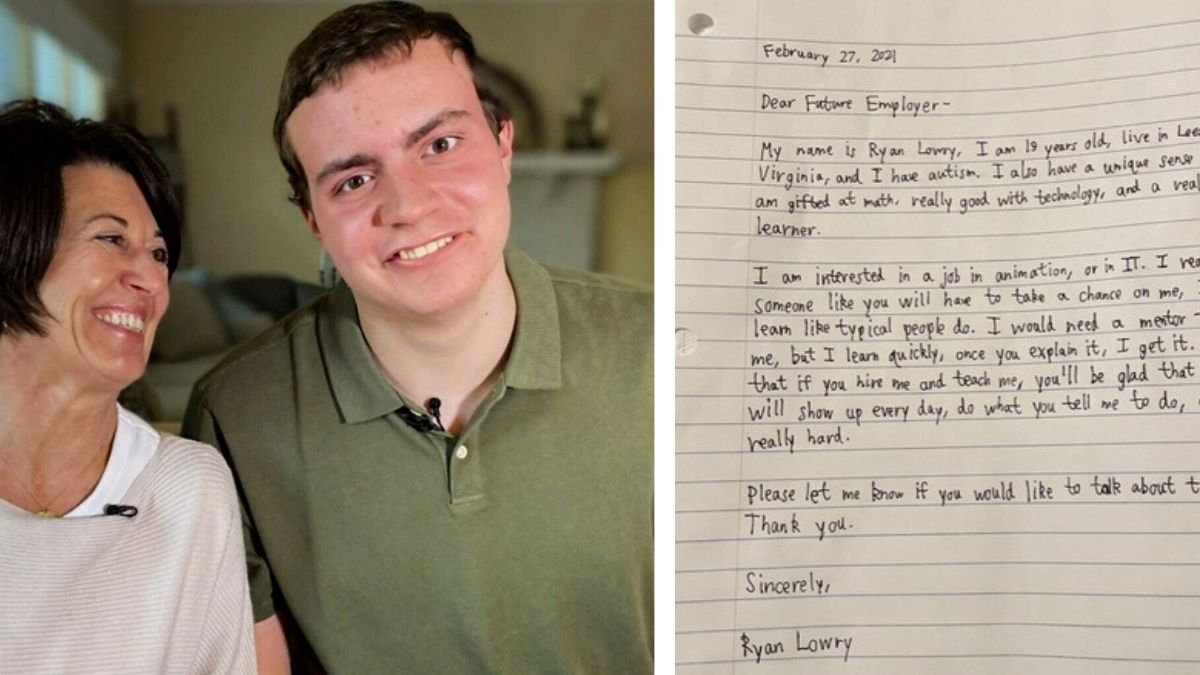 A remarkable boy who dared to be himself went viral by completely smashing long-held assumptions about disabilities.

He’s just unlike you

As his 20th birthday approached, all Ryan Lowry wanted was a career in animation.

And so one day he sat down at his desk, rolled up his sleeves and started working on his Linkedin cover letter.

To set himself apart, Lowry penned a cover letter on old-fashioned lined paper. As he opened his letter by saying, he’s different than most.

“My name is Ryan Lowry, I am 19 years old, live in Leesburg, Virginia and I have autism.”

According to the National Institute of Mental Health (NIMH), ASD is “is a developmental disorder that affects communication and behavior.”

Common symptoms include” difficulties in communication”, “restricted interests and repetitive behaviors” and “symptoms that hurt the person’s ability to function properly in school, work, and other areas of life.”

Those aren’t exactly traits that most job-seekers would readily share.

Regarding his ‘symptoms,’ Lowry says they’re well worth working with.

“I would need a mentor to teach me, but I learn quickly, once you explain it, I get it. I promise that if you hire me and teach me, you’ll be glad that you did.”

He also mentions his other strengths, which include “a unique sense of humor”, being “gifted at math” and “really good with technology.”

An outpouring of offers

Lowry’s letter gathered 178,000 reactions and over 6,000 comments, attracting offers of career advice, mentoring and even jobs.

“Every person on LinkedIn has been hired by at least one person that took a chance on him or her.  I love your letter, attitude and self-awareness,” wrote one commenter.

“Your autism is a superpower. The way your mind works is not a handicap, it is an amazing strength.”

Another commenter summed it up in 6 words.

“Don’t let others define who you are.”

You are your own unique skill

Ryan’s father Rob tells People that more impressive than the reactions is the future impact of his son’s actions.

“We hear from so many families that have similar circumstances to ours who are expressing their gratitude for Ryan’s courage to speak out and learn more.”

In other cases, we focus on what to hide, for example a developmental disorder like Ryan’s.

However, if his story proves anything, it’s that when you dare to be yourself, the world is at your fingertips.