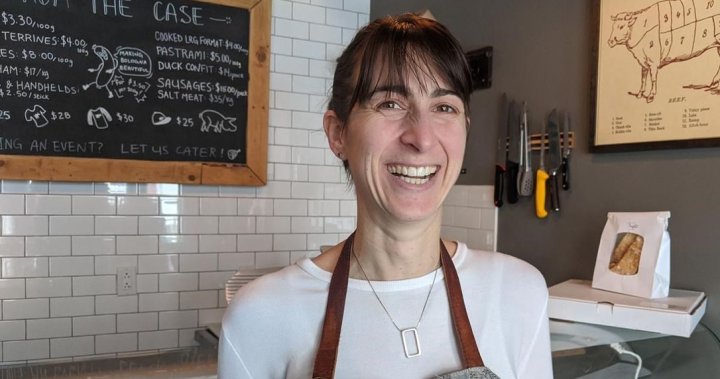 In the deli case at Chinched, a popular restaurant and charcuterie shop in downtown St. John’s, the house-made bologna sits on a shelf above the carefully cured salamis and sausages, larger in diameter and unmistakably pink.

“Make bologna beautiful again” is the restaurant’s unofficial slogan for the meat, which owner Michelle LeBlanc says is “one of our most popular items, hands down.”

Bologna is a high-fat slurry of pork or beef stuffed into a meat casing and cooked. LeBlanc said the Chinched slogan began as a wink to bologna’s wiener-like reputation – the less you know about what’s in it, the better.

“It’s our play on (our bologna) being a product that we can tell you every ingredient that’s in there,” she said. “There’s no and/ors, if you will. It’s straight up pork, pork fat and spices. No random bits.” Chinched also makes bologna with beef and, when it’s in season, moose.

Bologna may be an unlikely candidate for the artisanal treatment, but in Newfoundland and Labrador, “it’s in everyone’s refrigerator, all the time,” LeBlanc said.

In other words, in Newfoundland and Labrador, bologna is everywhere.

It’s sold in corner stores by weight, sliced on site from a pink tube with a knot at one end — usually the Maple Leaf Foods Big Stick product which, according to a spokeswoman for the company, comes in one- or two-kilogram logs. The company tracks sales by region not province, but the spokeswoman confirmed Atlantic Canada is by far the biggest buyer of the Big Stick.

There’s even a Maple Leaf Big Stick bologna character each year in the downtown St. John’s Christmas parade. Its costume used to be a soft pink tube with big eyes, a smile, and goofy oversized hands to wave at kids, but the whites of the eyes had yellowed over the years, giving the convivial meat man a jaundiced look. In recent years, the suit was upgraded to a neoprene-like material.

Ron Linegar, a cook at Caines Grocery and Deli on Duckworth Street, says for some people, the Big Stick mascot is more popular than Santa Claus.

Established in 1927, Caines is a mainstay in downtown St. John’s, and Linegar, 54, says they’ve been selling bologna for as long as he can remember. Its main room is a regular corner store, with racks of chips, coolers of pop and boxes of licorice by the cash register. In the backroom, there’s an eatery and deli, selling traditional Newfoundland meals and, of course, sliced bologna.

Growing up in Shea Heights, a St. John’s neighbourhood on the opposite side of the harbour, Linegar said parents would tell their kids the popular Newfoundland and Labrador folktale of the wild bologna that roams the woods at night. “You father would convince you as a kid that he actually went out and caught the bologna you’re eating on the table,” he said in a recent interview. “To a Newfoundlander, we called it our Newfie steak.”

Fifty years ago, people didn’t have much money in Newfoundland and Labrador, Linegar said, and bologna was cheap. “We’d have bologna 20 times to the one time we had a bit of beef,” he said. He and his mother would slice it thin, and eat it on potato chips, he said.

Kevin Phillips grew up in Cape St. George, a fishing village on the Port au Port peninsula on the west coast of Newfoundland. His father owned a store there in the 1950s, and Phillips said bologna was a top seller. It was also an affordable break from fish.

In 2014, Phillips published an all-bologna cookbook with 200 recipes. The recipes were culled from over 400, he said – he was careful to pick the best ones. They include a savoury bologna cake, bologna stroganoff and of course, bologna steaks.

Phillips now lives in Ontario and buys his bologna at specialty Newfoundland and Labrador grocery stores. He admits somewhat sheepishly that he prefers the Sunrise brand of stick bologna to Maple Leaf, mostly for its “rubbery” texture.

Phillips hasn’t tried Chinched’s artisanal bologna but says it’s at the top of his list when he returns to Newfoundland for a visit this summer.

“I can’t wait to try it, actually,” he said in a recent interview. As far as the Chinched slogan goes, Phillips doesn’t need convincing. To him, bologna was always beautiful.

This report by The Canadian Press was first published Jan. 10, 2021.

Deliveryman Arrives to Pick Up an Order From a Bakery – Breaks Down When He Finds Out Why His Own Name Is on the Package
This Is What Self-Care Really Means, Because It’s Not All Salt Baths And Chocolate Cake
‘Gen Z yellow’: Next ‘it’ colour or marketing ploy?
The Single Greatest Mistake A Man Can Make | Jordan Peterson
Piano Prodigy: Watch This 5-Year-Old Wow a Crowd With Amazing Mozart Rendition