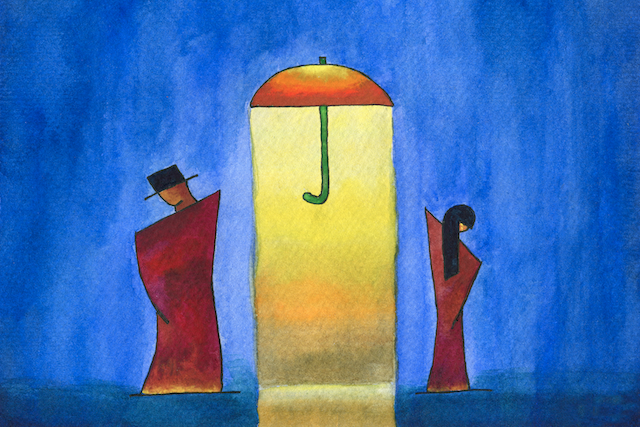 “You don’t have to rebuild a relationship with everyone you’ve forgiven.” ~Unknown

It’s natural, when you’re hurting and lonely, to want to reach out to people you’ve been close to in the past.

Especially if there’s unfinished business with someone. And especially given the added isolation that comes with a global pandemic.

Whether or not you do reach out is entirely your prerogative. For what it’s worth, I don’t necessarily think it’s a bad idea to try—in most cases, a “Whoops” is better than a “What if…?” Whatever the result, you’ll learn something. It might be an unpleasant truth, but it’ll help you, one way or another.

But, before you draft that text message, or email, or even pick up the phone, I also believe there are three things to consider:

1. Why are you reaching out? What’s really behind your impulse?

If you’re only doing so to take the edge off your loneliness, think again.

If the relationship with the person you’re thinking of contacting has broken down, there’s probably still some hurt there. For them and for you. Contact will re-open that wound.

Perhaps a long time has now passed, and any pain is vastly less profound than it once was. But let’s not kid ourselves—if things got so bad between the two of you that you haven’t spoken for months, things are pretty bad. There’s going to be something there.

The benefits of reaching out have got to outweigh the possible hurt that comes from doing so. And the only way that can happen is if you genuinely miss that person. In short, the person, and that relationship, has got to be worth the pain that might initially come from speaking to them.

So, ask yourself, honestly, do you really want to speak that person? Is it really them you miss, or is it just the connection you once had with them?

Are you, in fact, just lonely?

If, upon reflection, you realize it is just solitude prompting you, don’t reach out. It’s really not fair to either one of you. The pain won’t be worth it. It can’t just be about you, or what you’re currently feeling; the other person has to genuinely matter to you.

Don’t let them be collateral damage in your war against solitude. Because that’s all they’ll be, a casualty.

Your loneliness will pass. Like desperation or the need to get something off your chest that feeling is, in most cases, a temporary one. It will abate. And, when it does, so will your need for that person.

I’ve been on the receiving end of this more than once, and it’s not nice.

A former partner once contacted me out of the blue. It had been a turbulent relationship; during the time we’d spent together, our lives had both been raging dumpster fires, and we’d never been able to quell those flames adequately enough. Eventually, our relationship was consumed by them. But I still felt there was still something there. Despite the final rites having been administered, I knew I had never truly given up hope.

Initially, I was beyond happy they’d reached out. I didn’t know if anything could be salvaged, but I was willing to try.

However, after a short time, I knew my hopes were unfounded.

A few days after we began speaking, this person began to drift away. They even told me directly that they weren’t feeling desperate or lonely anymore, but I had already guessed that; their waning interest was obvious in the way the messages started drying up, in the manner in which they suddenly avoided the big topics, which we’d freely discussed up until that point.

I had served a purpose, and I had taken an edge off whatever they were feeling.

And once I had, I was let go again—I was no longer needed.

Because it had never been about me; it had been about them and what they were temporarily experiencing.

I was hurt but not indignant; I’d done it myself before, and it’d be hypocritical to damn them.

But, overall, there wasn’t a good enough reason to have those wounds re-opened. Reconciliation is a long, painful process; it can’t be built on loneliness. It only works if both people genuinely want to reconcile and be back in each other’s lives.

If you’re in the same boat, try to find a healthier way to feel connected. I know, I know… loneliness is vile, debilitating. And not an easy thing to tackle. As someone who has battled loneliness for a long time, I am in no way denigrating the devastating impact it can have on your mental health.

But being aware that you are lonely is a good first step in doing something about it. Knowing that you don’t really miss a particular person, that you just miss people per se, is a foundation. It’s something to build upon.

However, if you’ve seriously thought about this, and it is genuinely them you miss, then there’s something else to consider…

2. What do you want to achieve by reaching out?

In the same way you need to be clear about your reasons for reaching out, you’ve also got to have a firm idea about what you want to achieve.

It’s okay if all you want to do is try and re-establish contact with the future hope of reconciliation; there doesn’t have to any grand, overly complex plan in place beforehand.

But there does need to be something, some sort of objective. And it’s got to be realistic based on the relationship you had. If it was a fundamentally unhealthy or codependent relationship that took more than it gave, then expecting all of those flaws to be resolved in one message is simply ludicrous.

Perhaps you simply want to see if there’s a chance that something has shifted, and that there’s a glimmer of repairing the damage. It’s a small something.

And you need that something.

If all you’ve got is, “I don’t know; I don’t know what I want to achieve,” then it is probably the loneliness talking, or another random impulse, and stepping back is the right thing to do.

Don’t jump into this with no idea about what you want. There’s going to be some hurt, some pain—think about what you hope to achieve by (potentially) re-opening this particular wound.

If you’ve done that, and the answer works, then there’s only one more thing to consider…

Although you might view that past relationship and the other person involved through rose-tinted spectacles, they may not view you and the relationship in the same way. Just because you’re feeling conciliatory, it doesn’t mean they do. They might be perfectly happy with how things are, thank you very much.

Plus, if it’s someone you haven’t spoken to for some time, you won’t have a clear idea about what’s happening in their life. There’s a global pandemic unfolding around us—people have lost livelihoods and loved ones.

Your message may arrive while they’re in the middle of dealing with something huge. A message out of the blue from you may be the last thing they need.

There’s also the simple fact that people change. Not many, but some of us do. And that can be confusing.

Again, I was recently on the receiving end of this.

And, again, it was that very same former partner.

Time had passed since our last abortive communication. And, by this stage, I wasn’t so amenable to their approaches. I still had feelings for them, but those feelings had changed, mutated, in line with the work I’d done on myself in our time apart.

As a result, I now saw that person completely differently. Whereas there was once a deep affection, now there was a solid realization that my own mental well-being was better for having removed them. The sad truth was that I just didn’t miss them anymore.

Sometimes you need someone from your past to re-emerge to show you how much you’ve changed. I was very aware that, six months earlier, I would’ve been much more open to their words. I simply wasn’t any more; I was happy with how things were.

The affection (or connection) was gone, and I just wanted to keep moving on.

I couldn’t give them the answer they wanted, and they didn’t take it well. It wasn’t the happiest of experiences, but it did teach me that this was something to be aware of if the roles were ever reversed.

If you’re not feeling strong enough to face a response that isn’t overflowing with kindness, a flat refusal, or worse, no reply at all, don’t do it. You’ve got to embrace the possibility that this isn’t going to go as planned.

And you’ve got to be in a place where you can emotionally deal with that rejection.

If you are, it might be worth the risk. If you’re not, don’t do it.

These are strange, lonely times. Reaching out may seem like an entirely natural thing to do. Maybe you’ll get the chance to rekindle an old relationship.

Or maybe you’ll discover that the relationship truly did die a long time ago.

It’s always worth taking the risk, but make sure you truly want to, and that you’re prepared for any response, good or bad.

Reaching out—it can be a chance to reset a relationship, or to deliver the final rites. Both of which can be useful, and you might learn something invaluable.

Most of all, paradoxically, it might give you both a chance to finally let go.

And that’s something always worth doing.

Christopher Donovan lives in Liverpool, England. He is a mental health support worker and (sometime) writer. Connect with him on Medium here.

Femcels: Inside the enigmatic subculture of involuntary celibate women
‘It was my heart’: Women with heart disease face barriers to care in Canada, report says
He Was Fatally Beaten by Memphis Police — Now People Around the World Are Sharing #SunsetsForTyre in His Honor
All the Things I Didn’t Tell the Men I Dated Because I Was Afraid
The World’s Best Blind Mountain Biker | Brian Bushway | #shorts