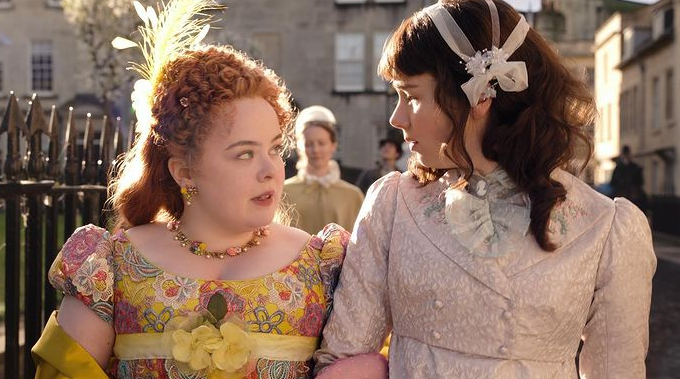 The following article contains spoilers about Bridgerton Season 2. Read at your own discretion.

Bridgerton, Netflix’s latest most-watched drama, has become a binge-worthy favourite for millions around the world.

The series explores the themes of love and marriage among wealthy families in the Regency area of London, paired with beautiful costumes and a diverse cast.

Actor Nicola Coughlan, who plays Penelope Featherington on the show, recently joined The Morning Show to spill some tea on Season 2 rumours and her time filming the series.

While filming, she says the combination of corsets and heels was “deadly” for her.

“The first day on the set I fell on the ground three times… and at one point stabbed my co-star Claudia Jessie,” Coughlan said.

While she doesn’t know what’s in store for her character in Season 2, she loves the idea of the romance between Penelope and Colin Bridgerton.

Another big reveal for fans in Season 1 is Coughlan actually is the mastermind behind town favourite Lady Whistledown. The actor says she figured out this news after reading a fan blog of the book series.

“I was like, ‘Have I read that wrong?’” she said. “It was amazing because it truly changed how I played the character… it was like playing two characters at once.”

When she found out Julie Andrews would be narrating the show as Lady Whistledown, she was in the kitchen with her mother and couldn’t believe the news.

“On my birthday, I actually got an email from Julie Andrews… She said, ‘From one Lady Whistledown to the other.’ It was so special,” she said.

And although she is based in the U.K., the 34-year-old actor has some Canadian roots. Coughlan says she has family and friends in Ontario and gave them a quick shout-out during the interview.

She also revealed that Toronto was her first trip abroad.

“I was too scared to go up the CN Tower, though… It was much too big.”

For the full interview with the Bridgerton star, watch the full video above.