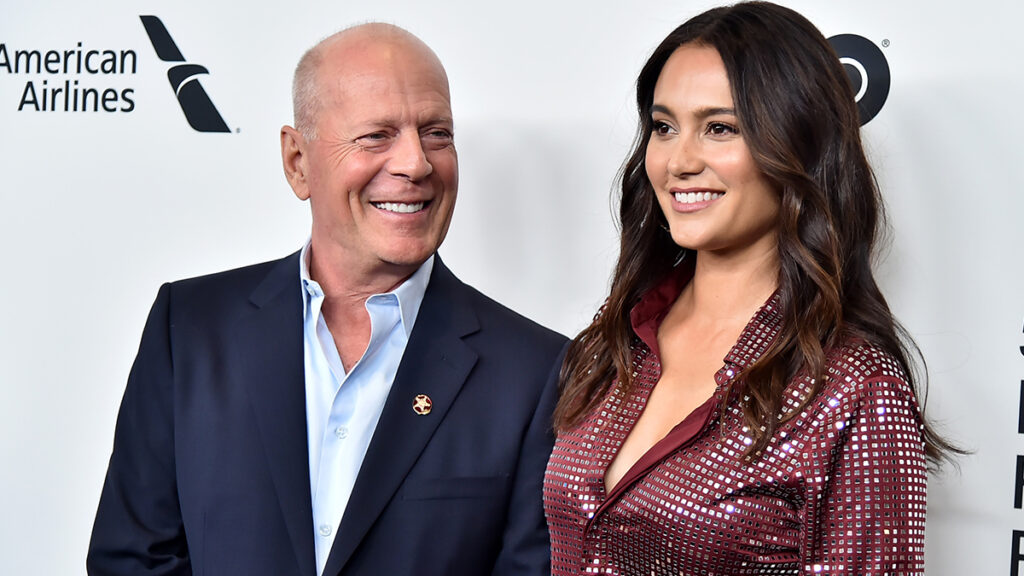 Bruce Willis is often thought of as a tough guy, both on- and off-screen, but as Stars Insider once noted, he’s actually a “tough guy with a heart.” Yes, he’s played some real hard characters, including in the Die Hard franchise that made him a household name.

However, when it comes to his personal life, Willis is full of surprises. Not only is he a devoted, loving father of five daughters, but he’s also built a truly enviable relationship with his ex-wife, Demi Moore. Furthermore, since 2009, he’s been in a sweet, supportive marriage with Emma Heming Willis.

Bruce hasn’t let his tough guy demeanor stop him from openly sharing his feelings towards the former model. He’s revealed that she opened up his heart to love following his headline-making split from Moore.

Here’s what we can learn from Bruce Willis and Emma Heming Willis’ relationship, and their special bond with Demi Moore.

Sometimes, it takes no time at all to feel sure you’ve found The One and, as Bruce Willis and Emma Heming told W magazine in 2009, that was the case for them. They met in 2007 at their mutual trainer’s gym and were friendly for a while before the actor asked her out on a date. At the time, Heming thought she was ready to try a new approach to love. “I had never really dated,” she told the magazine. “I’ve always been a relationship kind of person, but in that phase of my life I was like, ‘You know what? Maybe I’ll just date, see what it’s like.’ And I lasted one date,” she revealed. That’s because one date is all it took for her to realize that Willis was someone truly special.

Similarly, one date is all it took to overhaul the Unbreakable star’s entire outlook on love and commitment. “I went from ‘F*** love’ to ‘Love is truly the answer,’” he recalled, admitting, “I spent the last 10 years single and, for the most part, unhappy. In a dark place. I never thought that being with someone else was the answer. I would say, ‘I’m alone, but I’m not lonely.’ But I was just kidding myself.” Discovering a true connection with Heming changed all that. “I started hanging around Emma and on a day-to-day basis my life became much happier,” he enthused, adding, “We went on one date, on the Friday before Emma was getting ready to move back to New York, and then we fell mad crazy in love.”

They’ve mastered the art of the blended family

Given that they felt confident about their bond from the get-go, Bruce Willis and Emma Heming didn’t waste much time before they started building a permanent life together. In 2009, they said “I do” at their home in Turks and Caicos. After that, they had daughter Mabel Ray in 2012 and her little sister, Evelyn Penn, arrived in 2014.

The first step, however, was for Heming to meet Rumer, Scout, and Tallulah, as well as their mom, Demi Moore. Although a decade had passed since Moore and Willis separated in 1998 (they eventually finalized their divorce in 2000), they were “Hollywood’s friendliest exes” and had vowed, as Moore revealed in her memoir, Inside Out, to give “the girls a loving, supportive environment with both parents.” As she wrote, she and her ex-husband actually “felt more connected than we did before the divorce” — and he agreed. Speaking with Rolling Stone in 2000, the action star confided, “I still love Demi. We’re very close. We have three children whom we will continue to raise together, and we’re probably as close now as we ever were.” He concluded, “Our friendship continues; The institution has been set aside.”

Heming obviously realized the importance and sanctity of Willis and Moore’s relationship and, rather than allowing jealousy to get in the way, she embraced Willis and all of his family. “I met [his daughters] very early on, and I was definitely nervous because I’d never dated a man who had children and I wanted to be really sensitive to that,” she confessed to W magazine, adding that she’s been “really blessed because from day one it’s been comfortable and fun.”

Indeed, over the years, they’ve built the ultimate blended family with a bond based on friendship, trust, and support. When Willis and Heming tied the knot, Demi Moore was there. And when they renewed their vows in 2019 on their 10th wedding anniversary, Moore was there yet again. As Heming explained, the actress “welcomed me into her family like I welcomed her into ours. It was important for her to be there. She was at our first wedding. I loved having her there again. I wouldn’t do it without her,” she proclaimed.

So who is Emma Heming Willis?

Recounting some of her life in an entry on her blog, Emma Heming revealed that she was born in Malta, but moved to London with her mother after her parents split and, eventually, relocated to California. In the early ‘90s, she got her first (successful) taste of her future career when her mom enrolled her in a modeling competition in London called The British Elle Supermodel. She won and it kick-started her journey as a model, which saw her walk runways for everyone from Chanel to Victoria’s Secret.

It was after she met her husband and became a mom that Heming decided to focus her talents elsewhere. These days, she’s a momfluencer with her own blog and an Instagram following of 160K. She’s also an ambassador for Room to Grow, a nonprofit that “supports families during their child’s critical early years,” and the founder and CEO of CocoBaba, a line of “luxurious body care” that’s “made with mothers in mind.” Sharing the inspiration behind the brand, Heming revealed that while she was pregnant, she couldn’t find a go-to product for her stretch marks. Noting she wanted something “that’s safe, natural, unfussy, and actually works,” she turned to coconut oil and “the more my belly grew, the more I saw how well the coconut oil soothed and healed my skin.” So she decided to take it out of “the oil and vinegar aisle at the grocery store” and turn it into a skincare line and so, CocoBaba was born.

As Emma Heming told Closer in 2017, she and her hubby have found marital bliss because of a number of truly simple things that are often easy to overlook. For one, the actor “makes me laugh. You’ve got to keep laughing because if you stop, you’re going to have some issues,” she noted. Equally important, they prioritize each other — “We still have a date night once a week!” she revealed — and are always there for one another. “My husband is super supportive,” she said, gushing, “We are a good match for each other.” Heming shared one final key to their success with Us Weekly, saying, “We’ve always had a lot of respect for each other, which has really helped build a great foundation.”

It’s thanks to that unshakeable foundation that the couple’s love has only grown stronger with time. Rather than being shaken up by bumps in the road, they’ve held steadfast in their devotion. Because, as Heming shared on their 12th wedding anniversary, it’s not about having a perfect union but a real one. “Boy, I sure do love this guy to the moon and back,” she wrote on Instagram, quipping, “Even though there’s been times I would have loved to take him to the moon, drop him off, and come back solo! That’s what 12 years of marriage looks like, right? We’ve had our fair share of floating-on-air ups and disheartening downs. But he is my person,” she enthused.

And Bruce Willis is just as enamored with her. As he told W magazine, “I hear so many people in relationships say, ‘I just need a couple of days away, or even an hour away.’ But I don’t want to be away from Emma at all. It’s the most singular relationship I’ve ever had in my life.”

Another relationship that’s bloomed with time is that which the couple shares with Demi Moore. When the pandemic began, Bruce, Emma, and their daughters moved in with Demi, Rumer, Scout, and Tallulah and, as one source told People, “It really is one happy family.” Looking back at their time together, Demi gushed that she “was really grateful” for the opportunity to all live under one roof and that “it was really a blessing.” Sharing that her daughters “love their little sisters,” she added, “Our family regardless of what the shape of it is, it’s important to keep together and for the little ones to feel comfortable with me, and to know me so they also know their sisters better.”

Then, while celebrating International Women’s Day in 2021, the Ghost star took to Instagram to publicly praise Heming and their connection, writing, “I see her as family who I am honored to call a friend. Our children are sisters and yet there is no name for what our family connection is to one another,” she wrote, adding, “We are mothers united, sisters bonded on this crazy adventure of life.”

Support and intention is everything

As these three (and their kids!) show us, it doesn’t matter what form your family takes as long as there’s a solid foundation of love and respect. If all parties desire joy and fulfillment, any type of family situation can prosper!

Femcels: Inside the enigmatic subculture of involuntary celibate women
Looking for love? 44% U.S. adults use dating apps to find long-term partners: study
If You’re Feeling Judged: One Thing You Need to Understand
The Most Heartfelt Speech About Being Your Best | Gian Paul Gonzalez | Goalcast
How a social media group dubbed Mom Jeans is helping people fight inflation