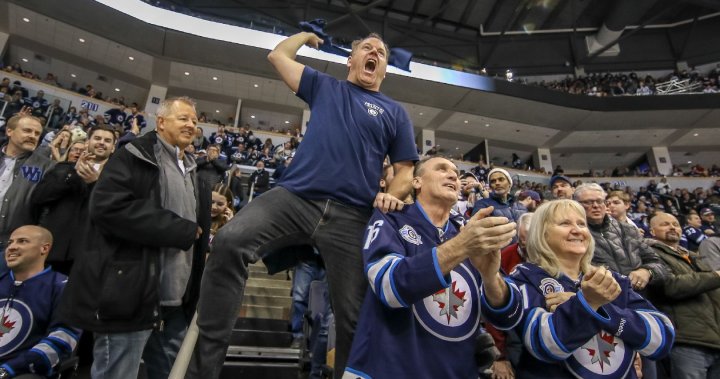 We all love an over-the-top fan at a sports game, but imagine being a fan full-time.

Canada’s very own Cameron Hughes is a professional “crowd ignitor” and over the last almost 30 years has spent time cheering at every kind of sporting event, including basketball, hockey and soccer games.

And yes, he gets paid for it.

Hughes recently joined the hosts of The Morning Show to talk about his new book King of Cheer and how his journey began.

He said it all started at an Ottawa Senators game.

“I was at the game with a buddy of mine and no one was cheering and I was upset,” he said. “I got up in the crowd, eight minutes to go, and I started to dance like crazy.”

He said the team came up to him after the game and asked him to come to another game just to dance.

“I kept showing up to other venues and eventually they paid me.”

Read more:
What will the future of sports look like?

Hughes says sports fans aren’t always clear on if he is a paid fan or not and the author says that’s part of the fun.

“It’s that sense of human interaction… when a human being is doing something crazy we connect to that more.”

And although he has had the opportunity to cheer at every type of sporting event all over the world, he says when it comes down to the best fans, hockey has it made.

“I think what I do works really well in the hockey world… I love the rawness of the hockey crowd.”

For the full interview with Hughes, check out the video above.

If You’re Feeling Judged: One Thing You Need to Understand
8-Year-Old Boy’s Family Is Down to Their Last $12 Living in a Shed – Until His Own Business Saves Them All
Deaf Domino’s Employee Delivers Pizzas on Foot After His Car Breaks Down – In Return, He Gets a “Tip” of $12,000
‘It was my heart’: Women with heart disease face barriers to care in Canada, report says
Service Dog Stays at Hospital With His Owner 24/7 — While Nobody Else Was Allowed to Stay