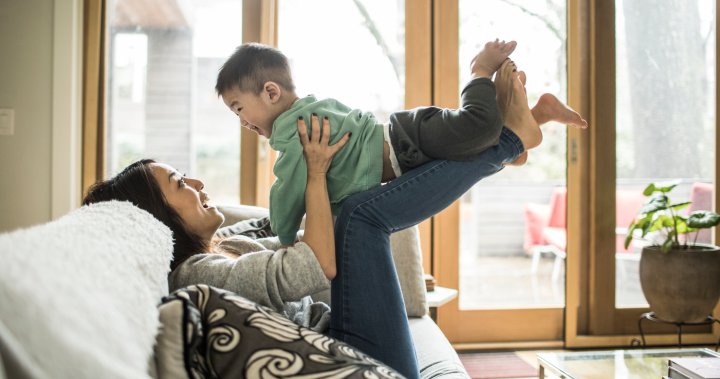 The first-time mother, from Brampton, Ont., says that despite some complications prior to her pregnancy, her daughter arrived healthy and giving birth was “unbelievably magical.”

Yet what followed were feelings of and sadness and fear. “That’s pretty much all I was consumed with. ‘There’s a pandemic, how will I keep you safe?’”

Many Canadians can empathize with the difficulty of parenting during the COVID-19 pandemic. Working from home, homeschooling their kids and even bearing a new child — parents have had to alter their parenting expectations.

What Heer envisioned parenthood to look like has completely changed because of the pandemic, she says. She feels guilty because her daughter spends most of her time indoors due to lockdowns. When they do get outside, Simryn cries as people pass by because she’s not used to having others around her.

“It’s really daunting sometimes. I think about it at night and it just makes me depressed that pandemic life is all she knows,” Heer says.

Still, she finds enjoyment in the milestones her daughter has been able to reach, such when she started on solid foods or said “mama” for the first time.

For Rana Ahmed, a family therapist from Montreal, the biggest challenge of parenting during the pandemic has been dealing with the isolation and uncertainties around COVID-19.

As a mother of three, Ahmed says on top of that, she is also concerned about the mental health of her children.

She points to her 12-year-old and eight-year-old as examples. They understand why they cannot see friends but remain disappointed.

“Their mental health and them being on screens for all their sports activities and other activities, we can see how burned out they are at home,” says Ahmed, adding they have been acting out more recently like shutting off their cameras instead of participating during classes.

Ahmed adds that when there have been school and daycare closures due to a rise in cases, both she and her husband have struggled to find time off work.

“Sometimes we have to reorganize around that one of us works earlier, one of us works until the evening or the night and then we’re both so tired,” she says. “You can imagine the quality of a family life when you’re multitasking at home.”

Pre-pandemic, Ahmed says her family was always on the go but being at home, she found they were able to slow down and connect more.

Now, Ahmed says she has been thinking about maintaining this ease to avoid stressing her kids out about one too many sports classes or performing well for future college admissions.

“The fact that I got the opportunity to try to slow down the pace and (know) it’s OK if I don’t have a plan and I just go with the flow — I think this is a big lesson that I learned,” she says.

Read more:
Here’s how parents can get through tough moments with their kids during the pandemic

Kira Arneson is a mother of two daughters. Lyllian is three, and one-year-old Emma was born during the pandemic in May 2020.

The Alberta native says that due to COVID-19 restrictions, she missed out on having support for Emma, such as having people bring food or help watch her newborn.

“No one does hold my baby while I shower except for my three-year-old or my hubby if he’s home, and it’s just hard — there’s no village (of support),” she says.

Socializing with other parents and finding online activities for her kids to participate in has also been difficult, Arneson says.

As an extroverted person, Arneson says parents like her used to be able to have a chat at class then go for coffee, but now, there’s not even any pre-chatter before a Zoom class like there would be in person. And when class ends, everyone goes off on their own.

“It’s not the same. We can go and meet up at a park sometimes, but it’s even harder when none of your kids have the same schedule because you never have to leave the house or worry about schedules,” she says.

Arneson, who is also the business manager at Forever Bee, adds she would often bring her daughter Lyllian to work to help deliver the company’s honey and products to stores and markets around the city.

“I miss being able to take my kid to work with me but I can’t let her walk in. … I miss having my kids get involved in the community,” she says.

While the future remains uncertain, Arneson adds she hopes her kids are able to experience unity and friendships in a post-pandemic world.

Arneson says the most rewarding part about being a mother is the feeling of love she gets from her children.

“There is nothing like the feeling of a kid that physically loves you. You can see it in the air around them, you can see it on their face. You can feel it in their squeeze,” she says, adding the love is what keeps her going.

4:58
Are you suffering from parental burnout? Signs to look out for

Are you suffering from parental burnout? Signs to look out for – Mar 1, 2021

Though the initial transition to homeschooling and working from home was challenging, she says being able to spend more time with her 12-year-old has helped her live a more meaningful life.

“I think a child’s main kind of love language is being able to spend good quality time with you,” she says. “That’s what they need from us.”

Radev says prior to the pandemic, her family would often travel overseas, but now with restrictions and lockdowns in place, they’ve opted to go camping instead, even during the winter.

“It was such a beautiful new experience for us that we never would have done before the pandemic,” she adds.

For Ahmed, watching her children become interested and educated about important topics like the history of Indigenous communities and the environment makes her hopeful for future changes.

“Their generation might have better experiences around these issues than I did myself or my husband. So, I think this is the most rewarding part for me personally,” she says.

New Barbie Doll Honours First Black Aviator — Inspires Youth to Take to the Skies (PHOTOS)
How to Show Up When Nothing About Your Life Is Perfect
Tough Times Don’t Last (Official Music Video) Fearless Motivation
The Most Heartfelt Speech About Being Your Best | Gian Paul Gonzalez | Goalcast
Looking for love? 44% U.S. adults use dating apps to find long-term partners: study