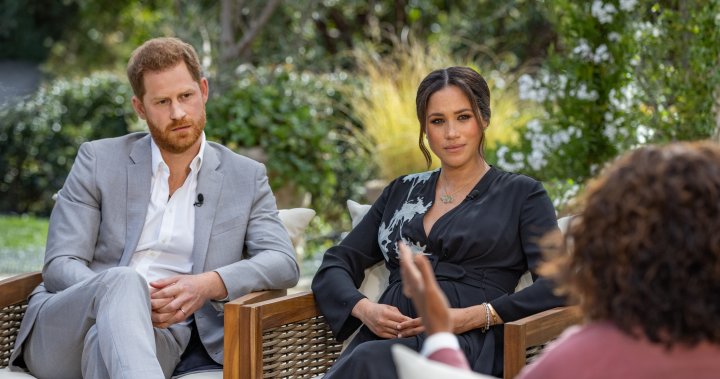 A majority of Canadians believe Meghan Markle was treated unfairly by the Royal Family because of her race, and a greater majority would prefer it if the monarchy had no formal role in Canada going forward, a new Ipsos poll suggests.

The couple spoke about their struggles with the “constant barrage” of “toxic” British media, the racism that Markle faced and the lack of support they received from the Royal Family. Markle also accused the Royal Family of refusing to provide mental help when she had suicidal thoughts, and alleged that someone in the family raised questions about her then-unborn child’s skin colour.

Harry later told Winfrey that Queen Elizabeth II and Prince Philip were not part of those conversations about skin colour.

Fifty-eight per cent of Canadians agreed that the Royal Family treated Markle unfairly because of her race, according to the poll. Women and people between the ages of 18 and 34 were more likely to agree, but a majority of respondents supported the notion across every demographic. Black respondents were most likely to support the notion at 98 per cent.

Eight in 10 people said that Harry and Markle made the right decision to leave the Royal Family last year, according to the poll.

Ipsos also saw an uptick in support for ending the Royal Family’s formal role in Canada, continuing a trend of rising support for that notion since 2016.

Two in three Canadians, or 66 per cent of respondents, said the Queen and the royals should not have any formal role in Canadian society, as they are “simply celebrities and nothing more.” That’s up two per cent over last year and six per cent since 2016, Ipsos says.

Roughly six in 10 people said the relationship between Canada and the monarchy should end when the Queen dies, although only about half of Canadians (53 per cent) supported the idea of a referendum on the monarchy, according to the poll. Nearly eight in 10 Canadians felt the Queen has done a good job in her role.

4:21
What’s the monarch’s role in Canada? Expert weighs in after Oprah interview

What’s the monarch’s role in Canada? Expert weighs in after Oprah interview – Mar 9, 2021

The Canadian poll results are markedly different from those seen in the United Kingdom after the Winfrey interview, which sparked a firestorm of anger among British pundits at the time.

A YouGov poll found that 48 per cent of 1,664 respondents in the U.K. had a negative view of Harry, while only three in 10 felt positive about Markle. It was the first time that Harry’s popularity has ever plunged below the 50 per cent mark.

The Duke and Duchess of Sussex left the U.K. in early 2020 and initially landed in British Columbia before securing a more permanent home in California.

The couple’s interview with Winfrey was their first in-depth public conversation since the move, and their allegations sparked a rare response from the family.

The royals said they were “saddened” by the couple’s allegations and found the claims about racism “concerning,” but also hinted at a difference in “recollection.”

Harry and Markle are expecting a second child in the coming months.

Exclusive Global News Ipsos polls are protected by copyright. The information and/or data may only be rebroadcast or republished with full and proper credit and attribution to “Global News Ipsos.” This poll was conducted between March 11 and March 12, 2021, with a sample of 1,000 Canadians aged 18+ interviewed online. The precision of Ipsos online polls is measured using a credibility interval. This poll is accurate to within ± 3.5 percentage points, 19 times out of 20, had all Canadians aged 18+ been polled.