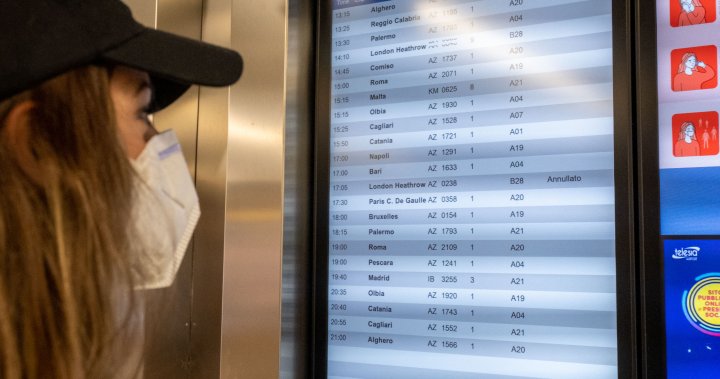 Mark Sultana says Canada’s decision to halt most air travel from the United Kingdom, where a mutated strain of COVID-19 has been discovered, landed “like a bombshell.”

The 52-year-old Canadian entrepreneur, who has called London home for the better part of two decades, said the move announced late Sunday has been especially disconcerting for Canadians who had planned to visit family and friends back home over the holidays.

“We can’t go anywhere — any of us,” Sultana, an administrator of the Facebook group “Canadians in London” said in an interview Monday. “We’re landlocked on this island, and it’s lots of Canadians who are affected.”

Originally from the Greater Toronto Area, Sultana said members of the 6,800-person Facebook group have reported their flights being cancelled. He said confusion and surprise reigned in the hours after Canada’s decision.

“They were prepared to quarantine and do the things that they needed to do to get back home, but now they’re completely stuck,” Sultana said.

The federal government said late Sunday that passenger flights from the U.K. into Canada would be suspended for 72 hours in an attempt to keep out a new strain of COVID-19 discovered by British health officials.

“These additional measures will allow public health officials time to gather further evidence and help reduce the spread of the virus that causes COVID-19,” Health Minister Patty Hajdu said in a statement announcing the border restrictions.

Canada is one of several countries to ban travel from the U.K. due to the new strain of the virus, which British officials said appears to be 70 per cent more transmissible.

British Prime Minister Boris Johnson said on Saturday that London and the southeast of England would be placed under stricter, “tier 4” COVID-19 restrictions due to a surge in cases and concerns over the new variant. British Health Secretary Matt Hancock said the strain is “out of control” in those areas.

This isn’t the first time London has been under lockdown, however, said 32-year-old Julien Gagnon, a native of Saint-Lambert, Que., who has lived in the U.K. for 10 years, including nearly five years in the British capital.

He said people have been hunkering down in London for weeks, but that the largest impact of “tier 4” restrictions will be felt in the coming days, as holiday gatherings between people from different households now are banned.

Read more:
Canada to suspend all flights from U.K. for 72 hours as new coronavirus variant spreads

“I’m pretty sure that for the very vast majority of people, it feels exactly the same way that it must feel in Canada right now,” he said in an interview. “We can’t do anything. We need to stay inside. We can’t see friends, we can’t see family, we can’t celebrate Christmas.”

In that way, Gagnon said daily life in London seems similar to his home province of Quebec, where Premier Francois Legault this month reversed plans to allow holiday gatherings over four days. Quebec has recorded over 6,200 new COVID-19 cases over the past three days and additional restrictions, namely the closure of non-essential businesses, are coming into effect on Dec. 25.

“We were going to have a bit more freedom around Christmas than in Quebec; now it’s exactly the same thing,” said Gagnon, adding that he plans to do a Zoom call with his family in Canada.

Bobby Demers, a Toronto native who has lived in the U.K. since 1988, said many people were out shopping in London on Monday, fuelled in part by fears that fresh produce will run out as the borders close.

4:05
Coronavirus: WHO says new virus strain from U.K. being studied

Coronavirus: WHO says new virus strain from U.K. being studied

“I went to the local supermarket this morning and the lineup, with cars, was outside the shopping centre itself,” he said.

The U.K. is less than two weeks away from the final stage of its exit from the European Union and the British government has not yet reached a trade deal with the 27-member bloc.

“This almost is like a precursor of what’s going to happen in two weeks when (the) lorries and the trucks and the planes are not going to be able to go back and forth very easily between England and Europe,” Demers said in an interview.

An administrator of a Facebook group called “Canadians in the U.K.,” which has 5,300 members, Demers said people are banding together and offering words of support amid the uncertainty. “The empathy that as Canadians we have for each other has really come out,” he said.

“People have this view of London as (a place where) people don’t talk to each other, people avoid eye contact, but when things get tight and in times of emergency, people here do tend to come together.”

— With files from The Associated Press.

Why I Didn’t Trust Myself to Make Decisions (and What If It’s All Okay?)
These Letters from a Single Mother Will Make You Believe in Love Again | Philicia Baugh | Goalcast
The Most Heartfelt Speech About Being Your Best | Gian Paul Gonzalez | Goalcast
How I Stopped Feeling Embarrassed and Ashamed of Being Single
The World’s Best Blind Mountain Biker | Brian Bushway | #shorts