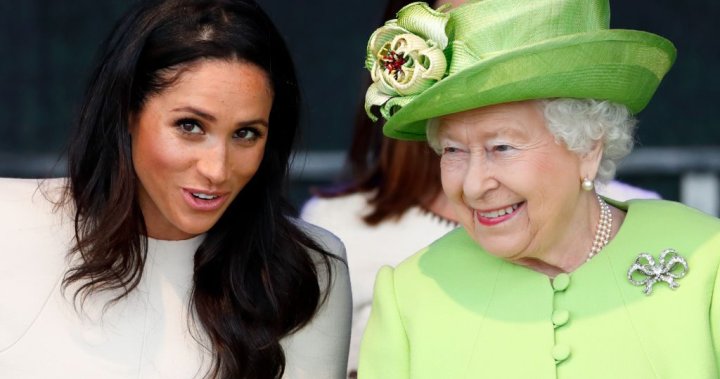 A satirical cartoon by the French magazine Charlie Hebdo has sparked international outcry after it compared Meghan Markle‘s struggles with the Royal Family to George Floyd in the moments before he was choked to death.

The cartoon, which appears on the cover of the latest issue, shows a demonic-looking Queen Elizabeth II kneeling on Markle’s throat, choking her in the way that a police officer choked Floyd last year.

“Because I couldn’t breathe anymore,” Markle says in a speech bubble below the words. The remark is a nod to Floyd’s death by suffocation, and to Markle’s comments during her bombshell interview with Oprah Winfrey earlier this month.

Markle and her husband, Prince Harry, accused the Royal Family of ignoring their struggles with the “toxic” British media, and of refusing to help Markle with the toll it was taking on her mental health. They also told Winfrey that someone in the Royal Family had raised questions about their then-unborn child’s potential skin colour.

Charlie Hebdo released its cartoon after the interview, amid a flurry of media attention around the issue.

Advocates for racial justice have blasted the magazine for recasting Markle in place of Floyd, whose death at the hands of police sparked international protests last year.

Halima Begum, who runs the race equality think tank the Runnymede Trust, said the cartoon was “wrong on every level.”

“The Queen as George Floyd’s murderer crushing Meghan’s neck? Meghan saying she’s unable to breathe? This doesn’t push boundaries, make anyone laugh or challenge racism. It demeans the issues & causes offence, across the board,” she tweeted.

Charlie Hebdo has spent half a century publishing provocative cartoons about politicians, celebrities and other cultural touchstones.

Two mass shooters attacked the magazine’s newsroom in 2015 after it published several satirical cartoons about the Prophet Mohammed. Twelve people were killed in the attack and another 11 were injured.

“We are Charlie Hebdo” became a rally cry for free-speech advocates after the attack, and the magazine has gone back to publishing its incendiary cartoons in the years since.

In 2016, for example, the magazine depicted a drowned Syrian boy, Alan Kurdi, as someone who would have later become a sexual abuser.


Many reacted to the Markle cartoon criticism by comparing it to the outpouring of support for Charlie Hebdo in 2015.

“It’s often forgotten because of the tragedy associated with it, but Charlie Hebdo is a horrific magazine that confuses shocking poor taste for humour,” one user wrote.

Without wading too much into this Charlie Hebdo debate again, if you have to continually explain that your “satire” isn’t racist & isn’t punching down, then it isn’t very good satire, it doesn’t matter which tradition it comes from, French or otherwise.

The Charlie Hebdo cartoon emerged at a culturally explosive moment for the Royal Family, which faces renewed questions about its colonial past, its relationship with race and its role in modern society.

Markle and Harry are also facing backlash in the U.K., where their popularity has plummeted in the wake of their interview with Oprah. Overall attitudes toward the couple dipped by 15 points into a net negative favourability rating, according to a recent poll.

Their allegations prompted the Royal Family to issue a rare response last week.

Prince William later offered a direct response to the allegations during a public appearance at a school.

“We’re very much not a racist family,” he said.
—With files from Reuters

Podcast: What to know about “novelty hunting.”
All the Things I Didn’t Tell the Men I Dated Because I Was Afraid
The World’s Best Blind Mountain Biker | Brian Bushway | #shorts
New Barbie Doll Honours First Black Aviator — Inspires Youth to Take to the Skies (PHOTOS)
The Most Heartfelt Speech About Being Your Best | Gian Paul Gonzalez | Goalcast