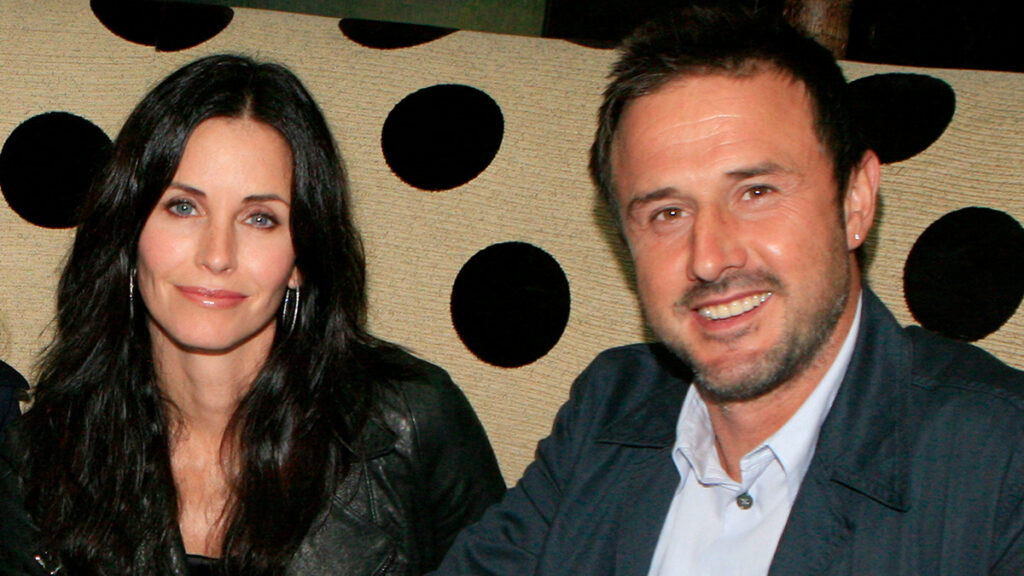 Courteney Cox and Johnny McDaid are not your traditional couple. Like all long-term partners (they celebrated their seventh anniversary in September 2020), they’ve faced both ups and downs, but it’s the way they’ve chosen to handle the bumps in the road that’s truly unique. Their key to relationship success has been doing things their way and it sure is working.

As the Friends alum gushed in a 2019 interview with The Guardian, despite the trials they’ve faced as a couple, she couldn’t be happier. Sharing that McDaid’s love makes her feel “safe and peaceful,” Cox also revealed that listening to his music still makes her cry, hearing him call her “darlin’ girl […] makes me melt,” and her favorite kiss of all time? Well, that’s “the first time I kissed Johnny.” Recalling the memorable moment, she confessed, “I, actually, was the person who kissed first!”

Hearing Cox speak so lovingly about her beau is surprising when you consider the fact that they were once engaged, called it off, then got back together again, but now don’t live on the same continent. Theirs isn’t a cookie-cutter union, to say the least, and that’s exactly why it works.

Courteney and Johnny forged their own path

Courteney Cox and Johnny McDaid first sparked romance rumors back in November 2013 when the Cougar Town actress arrived at a holiday bash being hosted by pal Jennifer Aniston with none other than the Snow Patrol guitarist. As one insider gushed, “Courteney definitely looked like she was on a date.” As it turns out, she was, and it’s friend Ed Sheeran who she can thank for the connection.

As Sheeran revealed in December 2013, he was the one who introduced McDaid — “My housemate who I’ve lived with for a year [in L.A.]” — to Cox. She herself later confirmed to The Guardian that “Ed Sheeran brought him over to my house one Sunday” and they quickly moved from there. Just a few months later, in April 2014, Sheeran offered an update on his matchmaking skills, revealing, “They’re already living together. Things are moving fast. He moved in and, judging by the last time I saw them, they couldn’t be happier,” he said, adding, “They get on really well and are genuinely good friends, pardon the pun.” The “Shape of You” singer also noted that “they certainly enjoy each other’s company and feel very comfortable with each other.”

In 1999, Courteney Cox said “I do” to Scream co-star David Arquette and, in 2004, they welcomed daughter Coco. Sadly, by 2010 they were no longer growing as a couple and decided to separate. The pair finalized their divorce in 2013, but as the actress shared in a 2016 interview with Bear Grylls (per Us Weekly), “It wasn’t a dramatic ending. I mean, as divorces go, I would say it’s one of the better ones,” she said, adding, “We’re good co-parents together.” Recalling the reason for their split, the actress revealed, “We found ourselves leading separate lives and just coexisting and being great friends, but not having the intimacy that […] is so important in a relationship,” she explained, saying, “I think you really need to work in a relationship, and I think that we tried.”

By building a supportive, healthy relationship with her ex-husband, Cox was able to let new love bloom without any drama. In fact, she was even able to work with Arquette and Johnny McDaid on Just Before I Go, her 2014 directorial debut. Arquette acted in the flick, as did the couple’s daughter, Coco, and McDaid’s band, Snow Patrol, was tapped to write three original songs for the film. As Arquette told E! News, he was “proud to be part of” the movie and as for Cox’s new man, he had nothing but kind words to share, telling Wendy Williams that McDais is “amazing — great guy.” Meanwhile, the film’s producer, Gabriel Cowan, confirmed to Life & Style that “David and Johnny get along great.”

Opening up about what it was like to collaborate on Just Before I Go, McDaid called Cox “the most completely talented person” he’s ever met, admitting he loves that she “makes me laugh and squirm and jump.” And they both agreed that the best part of working together was that “we got to kiss between takes!”

In June 2014, after just six months of dating, Courteney Cox and Johnny McDaid got engaged. As Cox told Jimmy Kimmel in September 2014 (per Us Weekly), her beau actually asked for Coco’s permission before popping the question and “gave her a little diamond ring and got on his knee. And she said, ‘Great! I’m going to camp tomorrow. Let’s do it right now,’” Cox shared. It was fast but McDaid agreed with Coco and they decided he would propose that very night at her birthday party, which was being hosted by none other than Jennifer Aniston. “They made a plan to count down from three, and when they got to one, he was gonna get down on his knee and say, ‘Will you marry me?’ and she was gonna say, ‘Will you marry him?’” Cox told Kimmel, gushing, “They planned it out, they found the perfect tree, with three branches that led to one trunk — it was just beautiful.”

But despite Coco’s blessing and their clear connection, TMZ confirmed in December 2015 that Cox and McDaid had called off their engagement with the rocker moving back to England. The split was anything but finite, however. The pair was spotted together just a few months later in March 2016 and in May 2016, they confirmed they had gotten back together. “Well, we love each other and we are — yes, we’re happy!” Cox told Us Weekly. McDaid added, “I don’t know if you can put a label on what makes us work so well, but I know that I’ve never loved like I love this woman. So if that’s enough, then that’s enough.”

The actress opened up about their reconciliation that August, telling Bear Grylls (per Us Weekly), “He’s from Ireland. And the way he regards love is precious. We have to treat it in a different way. It’s more special,” she explained, admitting that they were initially driven apart because “I didn’t know how to regard love the way he does. And it definitely made a lot of mistakes that I see, whether it’s co-dependency or people-pleasing. I didn’t know how to bring it in. It was always external,” she continued, concluding, “I definitely have learned a lot, and no matter what, I will be a better person from that breakup, even though it was so brutal.”

Cox shared the same sentiment with The Sun in 2020, saying, “We broke off our engagement and he moved to England, then we got back together, and it’s actually better than before. Yes it is far, but I love London,” she enthused, but admitted, “I don’t like the flight home, it’s long, you can’t sleep, I hate it, but we just make it work. He has been spending time here and then I go there and we try not to spend more than two or three weeks apart,” she explained, underscoring the fact that “we are not married but it is not an elephant in the room for us, we’re OK. Either way, whatever happens we are just focusing on the goodness of where we are.”

Physical distance is nothing for Courteney Cox and Johnny McDaid

They may have gotten used to flying back and forth and not living in the same country, but the pandemic really put Courteney Cox and Johnny McDaid’s relationship to the test. As she told The Ellen DeGeneres Show in May 2020, “He was supposed to go to Switzerland to write and instead had to go to England. Then all of a sudden, this all happened and they called a quarantine.” Admitting it was the longest they had ever been apart, she confessed that while they spent “a lot of time on FaceTime, now it’s like, oh my God, I just miss his physical touch, just all of it. It’s been hard,” she conceded.

By July, they still hadn’t reunited with Cox in California and McDaid in England and they were forced to celebrate his birthday virtually. Cox shared a snap of their e-date to Instagram, writing, “It’s been 133 days since we were last together. Covid sucks.” She added, “I loved our lunch/dinner (LA/London time) zoom date today. I miss you madly. #myone.”

Jump to September and they celebrated their anniversary virtually with Cox posting a sweet message on Instagram, writing, “7 years ago today I had my first date with this incredible man… and my life was changed forever. I love you.” Then, in October, she revealed they were still on separate continents. “Let’s say it’s been 150 days […] and I haven’t seen John in that many days,” she said, explaining, “He left the next day [after] the whole country shut down — or at least [when] California did.” It wasn’t until nine months later that they were finally able to reunite in December 2020, per People. And they’re showing no signs of slowing down.

Tough challenges can bring you and your partner closer together

While being forced to spend so much time apart can wreak havoc on a ‘traditional’ couple, Courteney Cox and Johnny McDaid have never done things in a traditional way. Through the ups and downs of life, couples can learn how deep their feelings truly run. Physical distance doesn’t have to mean emotional distance. And when it comes to love, there is no need to do things the common way. Rather, what matters is building a unique relationship that matches your unique needs and desires.

He Was Fatally Beaten by Memphis Police — Now People Around the World Are Sharing #SunsetsForTyre in His Honor
How I Stopped Feeling Embarrassed and Ashamed of Being Single
These Letters from a Single Mother Will Make You Believe in Love Again | Philicia Baugh | Goalcast
Femcels: Inside the enigmatic subculture of involuntary celibate women
Deaf Domino’s Employee Delivers Pizzas on Foot After His Car Breaks Down – In Return, He Gets a “Tip” of $12,000