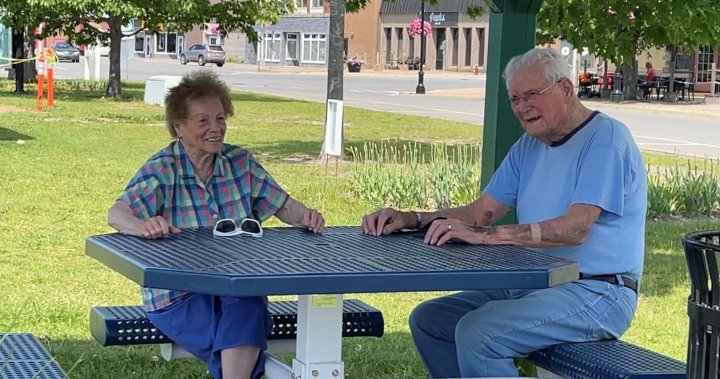 She and her husband of over 50 years can literally see the United States from their kitchen window.

Sitting on the banks of the St. Croix River, they question why a path to reopening that international border hasn’t been heard of.

“We miss going over there,” says Minnie.

“I think it’s terrible. I really do.”

Her husband, Eugene Wormell, says the pair would often cross the bridge for cheaper milk, cheaper gas or to visit family who live in Maine.

“Going across the border to Calais or East Port, that’s just been part of our lifestyle,” he says.

According to Allan MacEachern, the mayor of St. Stephen, that wanderlust is not uncommon in town.

“That’s our lifestyle,” he says.

“That’s our neighbour. That’s part of our community. We have family, friends… it’s very important to get back to where we were.”

MacEachern says the town’s also missing out on traffic generated by the border — people coming from throughout the Atlantic provinces to cross into the U.S. and, of course, Americans coming to New Brunswick.

Despite the craving for a return to normal, MacEachern says the town has faired better than expected while cut off from its cross-border counterpart.

“Business-wise, things have gone well here because we’re not crossing the border and we’re not going into the cities as much,” he says.

“We seem to be sticking to our own and supporting local.”

MacEachern says the town saw numerous businesses open up through the past year, and hopes residents keep supporting them when they are able to spend their money in Maine again.

The mayor, as well as the Wormells, all agree that the border closure has been a necessary precaution, and defer the decision to reopen to the experts.

However, they’re curious as to why no timeline has yet been set, with individual provinces unveiling their reopening plans.

Prime Minister Justin Trudeau says a plan will come — just not yet.

“We are still very much working both with medical professionals, with epidemiological experts, with partners in the United States,” he says.

“And when there are announcements to make, you can be sure we’ll be making them.”

Trudeau teased that Canada will likely take a phased approach to the reopening of the border, with fully-vaccinated residents getting to cross first.

Which is good news for Minnie and Eugene. The couple got their second doses Tuesday afternoon.

They also just happened to renew their passports before the border shut, and are now waiting to break them in.

“Hopefully we get the chance before we’re in the grave,” jokes Minnie.

2:01
Pressure building on Canadian and U.S. governments to announce plan for re-opening border

Pressure building on Canadian and U.S. governments to announce plan for re-opening border

Detroit Couple Turn Vacant Lots to Bee Farms – Including the Childhood Home of One Legendary Rap Superstar
Beyond Dry January: 5 Benefits of Extending Your Break from Alcohol
The Walt Disney Company to mark 100th anniversary with new experiences
How to Make Things Better When It Seems Like Everything Is Going Wrong
The Single Greatest Mistake A Man Can Make | Jordan Peterson