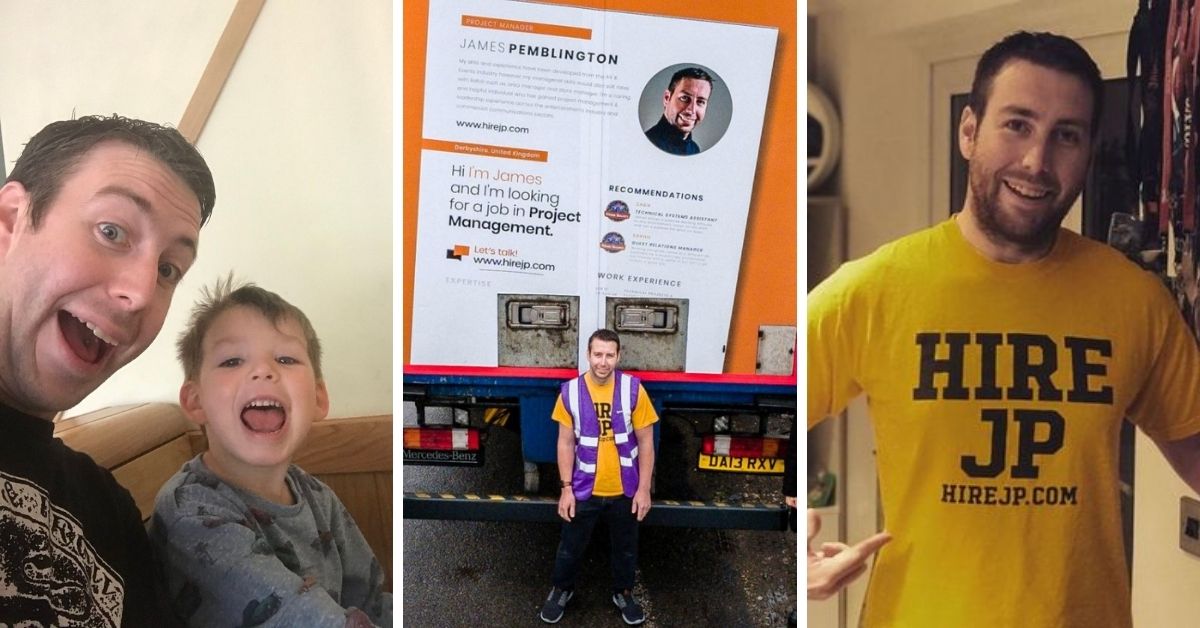 The coronavirus pandemic has unfortunately left many without a job, forcing some people into precarious financial situations. w

The stress of financial worry can create desperation that can lead many to a downward spiral. But for one unemployed dad, being laid off during the pandemic didn’t turn him to despair. Instead, he turned his luck around (and scored a new job!) by putting a giant copy of his CV on the back of a lorry.

James went on a quest for another job

Back in June 2020, James Pemblington, 33, lost his job as a technical projects and events manager at Alton Towers after being initially furloughed in March.

As a father of two kids, he knew he needed to find another job fast, in order to be able to provide for them. So rather than feeling downcast, he proceeded to apply to about 100 jobs and attended two interviews.

I was gutted to be leaving Alton Towers – that was my dream job – but I am a positive person and look on the bright side of things.

Initially, his efforts seemed to be in vain

At first, James did not hear back from anyone. Yet, he did not flinch in his determination.

I had applied in total to about 100 jobs. It was just rejection emails or nothing at all.

“I had two interviews where I got down to the last 13, but though the companies said my CV was great, the person they employed had been in the industry longer,” James continued.

He decided to think outside the box

James had tried all sorts of creative ways to pass out his CV and make sure it stands out. For example, he set up a website called HireJP. He even sent out “edible” CVs on chocolate brownies that featured a QR code linking back to his site. Even these creative ideas didn’t seem to work.

And still, the dad of two did not give up. During his search for employment, he came across an unconventional online competition held by lorry advertising firm DrivenMedia and job website Zoek. The winner would have  their CV displayed on the back of an 18-tonne HGV.

So James applied. And won. Only 48 hours after his CV went up on the lorry, James was hired for a job at a COVID-testing center. While sitting in traffic, his new boss had seen his CV on the lorry and got in contact with him.

“It was fantastic, but surreal. What else can 2020 throw at you? You have to get a truck sized CV to get a job.”

A new job, an exciting change

After having worked at Alton Towers for five years, which is a theme park, the new position was a big change for James. Of course, his new job will be a very different sort of environment.

“At Alton Towers everything is about the guests having a great experience,” he explains. Nonetheless, he wants to channel his past experiences into his new position.

At the testing centre we are not putting them on a rollercoaster, but it is about making sure we are putting the customer at ease and offering that great customer service.

James’ incredible story shows the importance of persistence. As Diana Campbell, managing director of Zoek said, “Seeing James get a job after only two days of the giant CV going on the road shows how he only needed to be put in front of the right audience.”

When you decide to keep trying, no matter how hard or hopeless it may seem, new opportunities will inevitably present themselves.

Looking for love? 44% U.S. adults use dating apps to find long-term partners: study
The World’s Best Blind Mountain Biker | Brian Bushway | #shorts
How To Find True Happiness | David Meltzer Inspirational Speech | Goalcast
Why I Didn’t Trust Myself to Make Decisions (and What If It’s All Okay?)
Kentucky Woman Gets Unbelievably Lucky at Her Office’s Christmas Gift Exchange — Now She Can Afford to Send Her Kids to College