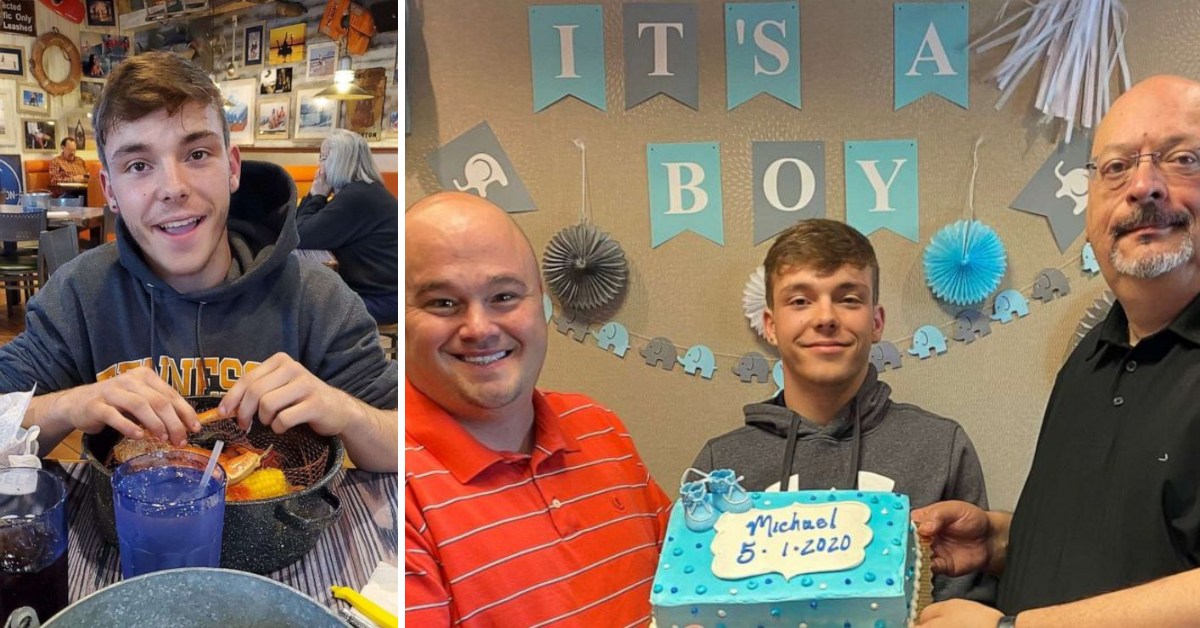 Their adoption ceremony over Zoom had a huge audience of 80 friends and family.

He seemed too old to be adopted

After Michael’s mother died, he was taken into state custody and moved around from foster home to foster home. In five years, he’d spent time with nine different foster families.

But it was the tenth that proved to be the lucky number.

Paul had three biological children of their own and they’d fostered children before — but Michael was different.

“When [Michael] came to us he was labeled a higher risk because he had [run away] before … but we’ve never [seen] that kid,” Chad Beanblossom told Good Morning America.

“He just kind of came in and took over our hearts. He’s taught us just as much, if not more, than we have him.”

“Our whole world revolves around Michael.”

They decided to become a family

One day, Michael asked the men to adopt him.

“We wanted the same thing that he did,” Chad said. “It’s really hard to imagine our life without him.”

Due to the pandemic, the adoption ceremony couldn’t be held in person. So, they did it over Zoom and 80 loves ones logged on to witness it.

“The judge mentioned it was the largest Zoom adoption she had done to date, Chad said.

Allison Sayne, a family services worker who knew Michael, told Good Morning America that Paul and Chad have been a wonderful fit for the former orphan.

“Paul and Chad Beanblossom have been great at advocating for Michael and giving him opportunities that he may have not gotten otherwise,” she said. “This family had to undergo a tragedy of a house fire a month before Michael’s adoption, but they focused on the fact that they had each other and didn’t let it affect Michael’s adoption.”

“Michael and his parents’ main worry was being able to stay together,” she added. “I am so happy for Michael, Paul and Chad and am excited to see what the future holds.”

It’s hard to imagine how frustrating it must have been for Michael to go through so many households without finding a match. But it sounds like it all worked out, proving that good things do eventually come to those who wait.

‘Gen Z yellow’: Next ‘it’ colour or marketing ploy?
Deliveryman Arrives to Pick Up an Order From a Bakery – Breaks Down When He Finds Out Why His Own Name Is on the Package
Uber Driver Donates a Kidney to His Passenger – Here’s Why He Insists It’s Not a Coincidence
The Single Greatest Mistake A Man Can Make | Jordan Peterson
This Is What Self-Care Really Means, Because It’s Not All Salt Baths And Chocolate Cake