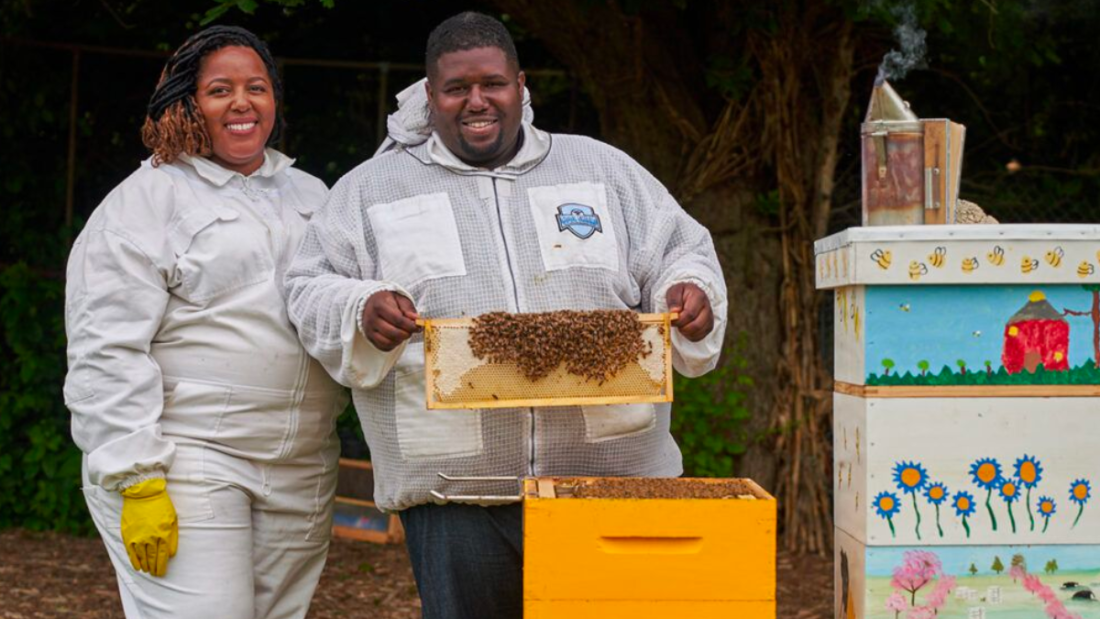 We all remember being told one time or another that if we do what we love, we never have to work a day in our lives. One Detroit couple is turning that dream into a reality.

Residents Timothy Paule and Nicole Lindsey witnessed the housing crisis in there city some years ago. People lost their homes and were forced to move away during the 2010’s, leaving approximently 90,000 vacant lots in the city of Detroit. Paule and Lindsey believe that local residents have a duty to help build their community back up. They chose a method that is creative and beneficial in many ways.

RELATED: Homeless Man Caught Giving His Dogs a Birthday Party – His Neighbors Step in and Change His Life

“Unfortunately, within that area, the city is not building new homes.” Timothy tells reporters, “By activating these vacant spaces and transforming them into urban farms, we are able to have vast amounts of fresh vegetables that our bees can cross pollinate to provide for the community.”

What Timothy and Nicole set out to do was to transfer Detroits vacant lots into urban bee farms. They titled their project: Detroit Hives.

Their Excitement Is Palpable and Spreading

Timothy mentioned his grandmother when asked about the nature of this project. He said that when he and his brother would get sick, his grandmother would create cold remedies using honey. He decided, along with his girlfriend and partner Nicole that they would go back to his roots and become bee farmers.

Since its inception, the non-profit organization has seen rapid growth. Nicole attributes their success to taking opportunities as they come up. “Since we started, it has been the year of the yes.” Nicole mentioned, “When opportunities come, we say yes. It has helped us get to this.”

Their excitement and eagerness to further the project shows how much they enjoy giving back to the community that raised them.

Detroit Hives has its eye on the next generation of creatives and entrepreneurs. They believe that education is the key to be able to explore new ideas. “Its important to expose our children to things they aren’t familiar with.” Timothy said, “We never know where it might take them.”

Timothy and Nicole have been hosting seminars at local high schools to talk urban farming, bee keeping and their importance within the community. They hope to show kids one of the many ways they can help make the world a better place.

Timothy said: “We really didn’t see a lot of positive figures out there, so it’s important for someone like me to be in a position of leadership to inspire others.”

At the time of writing, Timothy and Nicole manage 34 bee farms. They even took the abandoned lot of popular rapper Eminem’s childhood home, and turned it into an urban farm. With so much free room in the city, Detroit Hives task list just keeps growing. “There was a problem that we’ve seen in our city and with our honey bees.” Nicole said, “What we’re doing here is solving both of those problems.”

It’s wonderful to see home-grown creative projects turn into something bigger. These days, Timothy and Nicole spend most of their time in nature and inspiring the youth. They found what they love, began to build, and never again have to work a day in their life.

MASTER SELF MOTIVATION – Les Brown Motivational Speech
The World’s Best Blind Mountain Biker | Brian Bushway | #shorts
8-Year-Old Boy’s Family Is Down to Their Last $12 Living in a Shed – Until His Own Business Saves Them All
Podcast: What to know about “novelty hunting.”
‘It was my heart’: Women with heart disease face barriers to care in Canada, report says