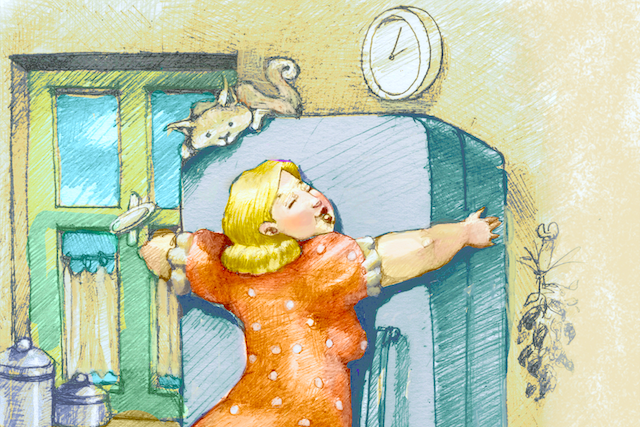 “Nonresistance is the key to the greatest power in the universe.” ~Eckhart Tolle

I cannot say that I didn’t struggle in my life. But there’s one area in which I have overcome the challenges I was facing with hardly an effort: letting go of the eating disorder I was suffering from, getting rid of the extra weight I was carrying, and maintaining the results easily for twenty-eight years.

How Did I Do That?

In a minute I’ll tell you exactly how I did that and how you can do it too. But first let me take a moment to explain what exactly I was dealing with.

As a child I always loved to eat and ate quite a lot, but though I wasn’t skinny I was always thin.

At around fifteen I developed an eating disorder. I usually say that I suffered from bulimia, but when I read the symptoms, I’ve realized it might have been a binge eating disorder.

I would eat a huge amount of food one day in a short period of time, and the next day I would start an extreme diet plan that I never managed to maintain for long. On one occasion I managed to maintain such a diet plan for several months until my period stopped and my hair started falling out.

I would rarely vomit. Firstly, because it took a couple of years until I found out it was possible, and secondly, because it made my eyes red and swollen.

But I think the exact diagnosis is not that important. In any case, I was suffering. And I’m sure you can relate, because even if you are not diagnosed with an eating disorder, you might still be struggling with endless cycles of dieting and overeating.

(You may not be calling your eating plan “a diet,” since today it’s fashionable to say “I simply eat healthy” instead. But all those healthy *and strict* eating plans are ultimately diets, and like any diet, they eventually drive us to binge eating.)

Why Did This Happen to Me?

Concurrent with the development of my eating disorder I struggled as a teenager with bullying for six years.

As an adult, when thinking about what happened, I used to say that eating was a distraction from my feelings. This is not entirely wrong; however, over time I’ve realized that this was not the main cause of my problem.

My mother struggled most of her life with obesity and for years she tried all sorts of diets, without success.

When I was in the seventh grade, she became concerned that I was eating too much. “If you keep eating so much, you’ll end up being fat like me,” she repeatedly told me.

As a consequence, I came to believe that I inherited her tendency to be overweight and thus shouldn’t eat certain kinds of food. And because I had a hard time resisting the temptation, I started eating in secret and eventually developed an eating disorder and gained weight.

Toward the age of twenty-three I woke up one morning with the understanding that not only did I think about food all day long, my efforts to overcome my weight problem didn’t get me anywhere.

That morning I decided I would never diet again, even if it meant being overweight my entire life. I also decided that the foods that made me break my diet time and time again would become an integral part of my menu.

For instance, from that day on, for many years my breakfast consisted of coffee and cookies (and that wasn’t the only sweet thing I ate that day).

Once the burden of dieting was removed from my life, I no longer felt the irresistible urge to finish a whole block of chocolate like before. I knew I could eat chocolate today, tomorrow, the day after tomorrow, and so on; and thus, I got to the point where I had chocolate at home and didn’t touch it—something I couldn’t imagine before.

During the following year my weight has balanced and to this day, twenty-eight years later, I am thin and maintaining a stable body weight.

I still think quite a lot about food, but not obsessively, only because I enjoy it so much. I also eat quite a lot, by estimation between 1700-2000 calories a day (I don’t count). I love healthy food but also enjoy unhealthy foods, and I never feel guilty for something I ate; in the worst-case scenario I suffer from a stomachache or nausea.

The Principles That Gained Me My Freedom

Contrary to popular belief, no food by itself has the power to create addiction, ruin your health (unless you are suffering from a specific medical condition), or make you instantly fat. However, many people have gotten extremely rich by convincing you otherwise.

Obviously, the main part of your diet should be healthy, yet the bigger problem than eating unhealthy food is stressing, obsessing, and loathing yourself for doing so!

If you can’t control yourself in front of a certain food, allow yourself to eat it only when you are outside or buy it in small packages.

2. No food is strictly forbidden.

When we forbid ourselves from a certain food, we inevitably develop an uncontrollable desire for it, and eventually find ourselves helplessly bingeing it.

When we allow ourselves to eat whatever we crave, as I did with sweets, the day that we don’t feel like eating the food we couldn’t resist before, or desire it only once in a while, will surely come.

The reason why this idea seems so unrealistic to most people is due to what I’ll describe next.

The secret of my success was that I really allowed myself to eat whatever I want for the rest of my life.

While people sometimes say that they give themselves permission to eat certain foods, they are still driven by fear of these foods and by the belief that they shouldn’t be eating them.

While “enjoying” their freedom, in their minds they say to themselves, “tomorrow I’ll get back on track.” (Tomorrow, in this context, can mean the next day or “as soon as I can.”)

And as long as this is their state of mind, they’ll be impelled to eat as much as possible of the forbidden food today.

4. Stop treating yourself as an emotional eater.

According to the urban legend about emotional eating, a “normal” person should only eat when they are hungry, only healthy food, never eat for pleasure only, and never reach a sense of fullness.

Anything but this is emotional eating.

But this is a complete deception, and if you hold onto it, you’ll forever be dieting and bingeing and will always feel that something is wrong with you.

I often eat a bit too much or things that are not so healthy. I eat not only according to my needs but also for pleasure. And if I overdo it, nausea, stomachache, and a feeling of heaviness remind me that I need to regain balance.

I can promise you that as long as you eat according to someone else’s plan, or according to any strict plan, over time your efforts will be futile.

Rules such as “You must eat breakfast,” “three (or six) meals a day,” “Chew each bite thirty times,” “Never eat in front of the TV,” or, “Don’t eat after 7pm,” will only stand between you and your natural instincts and enhance fear and self-judgment.

I eat fast, mainly in front of the TV, I eat small portions every one to three hours, I eat late at night—and that’s fine for me.

So listen to yourself and learn through trial and error what works best for your body.

6. Be honest with yourself.

Often people say things like, “I’ve forgotten to eat,” “I’m never hungry before 4pm,” or, “one modest meal a day totally satisfies me.”

They insist so strongly it’s the truth that they manage to deceive even themselves. But only for a while. Eventually their natural hunger and satisfy mechanisms reveal the truth, and again they find themselves bingeing.

So don’t play games with yourself. It might work in the short term, but it keeps you in the loop of weight fluctuations and obsessive thinking about food in the long term.

7. Do not waste calories on something you don’t like.

If you insist on eating something you don’t want to, you’ll find yourself craving what you really desired and eventually eating it in addition to what you already ate.

Being physically active boosts your metabolism and immune system and supports your emotional and physical well-being.

Sometimes, however, people set a trap for themselves when they push themselves too far with exercising, and thus, after a while they can’t endure it anymore and ultimately quit.

Instead, be as active as you can and in the way that best suits you. That will serve you much better in the long term.

9. Focus on reaching a balance.

Your ideal body weight might be a bit higher than the one you desire. But remember, insisting on reaching a certain body weight that is beyond your natural balance will cost you your freedom and keep you in the vicious circle of dieting and bingeing.

Last but Not Least…

The concept I’ve offered here won’t make you lose weight overnight. It took me a year to lose the excess twenty-two pounds I was carrying. And if you have more weight to lose it might take a bit longer.

But if you feed it well, without driving it crazy with constant fluctuations between starvations and overeating, over time your body will relax and balance itself, this time for good.