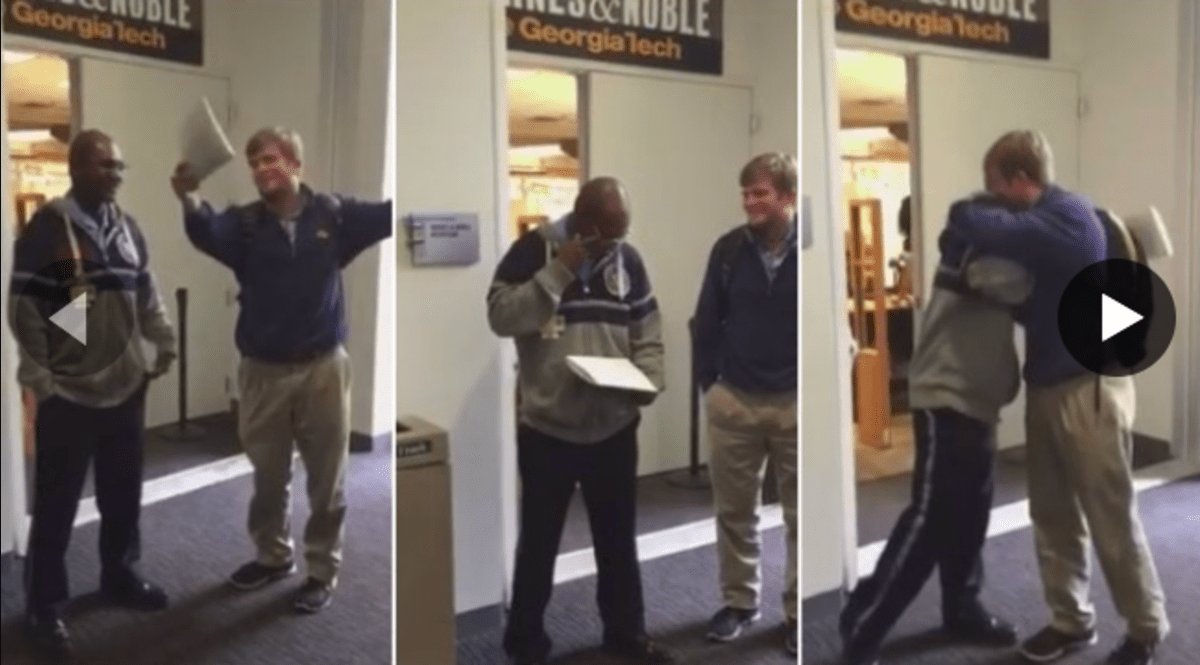 Many people in the world can leave a lasting impact on us, every day, without us even realizing it. When we go throughout our day-to-day lives, we hardly notice the people who are staples in our daily routines. For many college students, these individuals can pass them by. With so much to focus on, like exams and future careers, busy students do not always notice the little things and the contributions people make around them.

However, there are times when the supporting cast gets recognized. While a simple thank you may be enough for some, sometimes going a step further really makes a difference in a person’s life.

Students wanted to pay it forward to someone who deserved it.

Marcus Burns is a security guard who works on campus at Georgia Tech. He is someone who interacts with the students on a regular, daily basis. The students decided that for the holiday season, they wanted to do something nice for Burns. Many of them felt as though he deserved much more than just a “thank you” or a “happy holiday.”

Conor Lange, a student at the Scheller College of Business decided to organize a fundraiser for the security guard. Lange shared with Fox5 that Burns is just someone who goes out of his way to make the students’ days that much better. Many students agreed with Lange, feeling that Burns deserved something special.

RELATED: Former Security Guard Becomes Medical Student At The Hospital Where He Worked

Lange began collecting money from his peers for Burns.

The college student shared that he had only expected to raise maybe $100-$200 for the security guard. However, he was shocked and astounded when he saw how much he was able to raise for Burns. In 36 hours, he raised $1,600 for Burns.

He is the most positive person, he brings so much energy to us every day. He knows most of the students by name and we realized how many people loved him and we wanted to give back to him in the holiday season in the Christmas season,” Lange told Fox.

All 150 students came together to give Burns his well-deserved gift.

Lange not only organized the fundraiser for the gift, but he also got all of the students who donated together so that they can deliver the gift to Burns in person. When Burns realized what was going on, he was truly moved. So much so, that he burst into tears at the kindness and thoughtfulness of the students a Georgia Tech.

“We got you a little present for the holidays. it’s not about the money, it’s about how many people donated to show you how much we appreciate you every day,” Lange said in the video. Students applauded and cheered for the security guard, showing their true appreciation for him.

Burns thanked all of the students from the bottom of his heart and even shared his plans for the generous gift. With some of the money, Burns said he wanted to take his family out to dinner and also take them bowling—a nice moment for the holiday season. It just goes to show you, no matter your career, you can make a big difference in someone’s life.

KEEP READING: School Janitor Walks to Work for a Sad Reason – So His Students Give Him a Gift That Makes Him Cry

How To Find True Happiness | David Meltzer Inspirational Speech | Goalcast
The World’s Best Blind Mountain Biker | Brian Bushway | #shorts
How to Show Up When Nothing About Your Life Is Perfect
‘It was my heart’: Women with heart disease face barriers to care in Canada, report says
Kentucky Woman Gets Unbelievably Lucky at Her Office’s Christmas Gift Exchange — Now She Can Afford to Send Her Kids to College