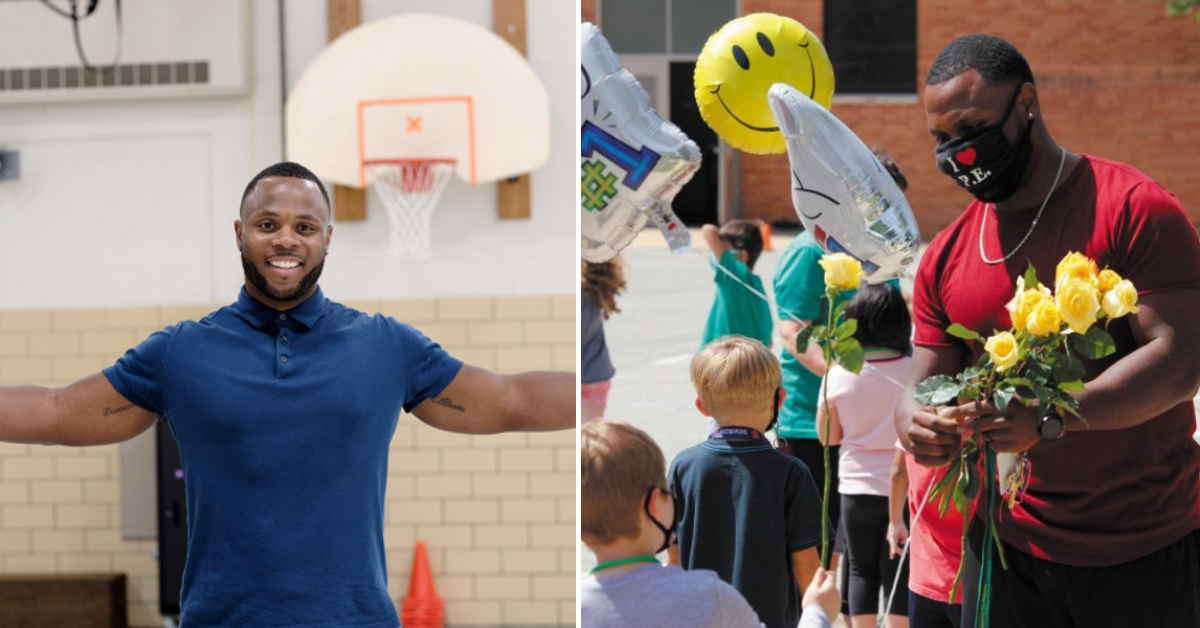 As a young boy, Darrion Cockrell’s future seemed sealed: prison or the cemetery.

Yet today, he’s Missouri’s Teacher of the Year, all thanks to the huge hearts of some incredible people along the way. His story is an example of how the right combination of caring and support can change lives.

“I was born to a drug-addicted mother who had two of her six kids by the age of 16. My father was murdered when I was 4, and I began my journey in and out of the foster care system not long after my 6th birthday,” he shared in his recognition speech.

Six-deuce-87 Kitchen Crip gangster. Yup, your 2021 Teacher of the Year used to be in a gang

In his acceptance speech, Missouri’s 52nd Teacher of the Year admits he “hated” school as a kid. His main goal there was just “getting through the day.”

Without any support system or parental guidance, he joined a gang before he turned 10. Cockrell recalls being less preoccupied by studying and books and more concerned with gang activity and instability at home.

I didn’t care about books. I had to go home and figure out what I was eating. I had to figure out if my lights were going to be on.

The impact of support

Cockrell fortune’s turned when, while in grade school, he was moved to ‘Deseg’, short for Missouri’s desegregation program.

Set up in 1982 following a federal lawsuit, it enabled African American students to attend more advantaged suburban schools in St. Louis County. It included access to specialized courses. For Cockrell, who struggled with learning disabilities, this was a game-changer.

His new teachers showed true care and concern for his success, which opened his eyes. It “changed my perspective on people and school,” he says.

That event brought some truly important people into his life, who ended up being in his corner during his biggest challenges.

Now open to possibilities, Cockrell was hungry to learn. However, he was still in a gang and coping with a chaotic home life.

That all changed one day when one of his counsellors — and biggest supporters — said four words that changed Cockrell’s life forever: “You’re not going home.” His grandmother had lost custody of him.

He moved to a boys’ home just three blocks away from his new school — and away from gangs and his chaotic home life.

His principal and teachers even went to court on his behalf to prevent him from being transferred to foster care further away.

Cockrell says that, if not for this, “the trajectory of my life would have gone in a completely different direction”. One teacher who was close to him even drove him to and from school everyday.

A counsellor named Ken took him under his wing, showing him the importance of self-discipline and the value of hard work.

Darrion Cockrell on Ken from the boys’ home

At school, Darrion also found his passion for physical education class. Noticing that, his teachers challenged him to channel that same passion and joy into his other classes. The young man blossomed.

Cockrell’s life came full circle when, in the 7th grade, his football coach Dennis and wife Sherry adopted him. Finally, he’d found a home. It gave him the stability to realize his potential. He’d eventually graduate from the University of Missouri and ultimately worked as — what else– a physical education teacher.

Mr. DC is loved by all

Started from the bottom

‘Mr.DC’ — as he students affectionately call him — is on a mission to pay kindness forward to the next generation. His Crest-Fit health and fitness program has been such a hit with his students that their parents are joining in!

Mr. DC has taken his energy to virtual classrooms during the pandemic, delivering workout videos that include inspiring messages, with some even featuring his wife Kimberly and three-year-old son Dawson.

Cockrell is the second Missouri Teacher of the Year recipient from the Lindbergh school district, and is the first male to capture the state’s top education award since 2015.

“He guides his students towards long-term physical and mental wellness, and the connections he has established will impact Crestwood children for years to come,” said Commissioner of Education Margie Vandeven.

You Can Make a Big Difference

Darrion Cockrell’s struggles might seem rare, however plenty who walk among us carry some sort of emotional weight that is holding them down.

The overwhelming support he received might also seem rare, though it shouldn’t.

We underestimate what even a pat on the back or small gesture of encouragement can awaken in someone who, like Darrion Cockrell, just needed to see things differently — and be seen differently.

All it takes is one person, one interaction, one kind word to make the world a better place