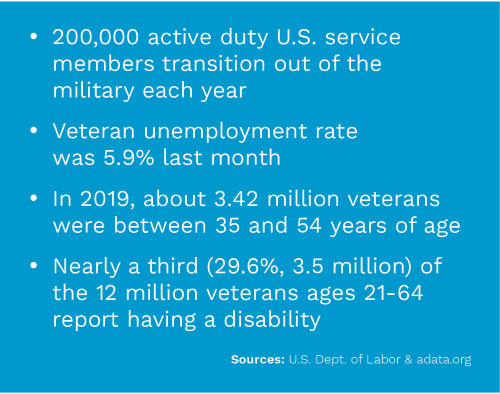 On this Veteran’s Day, the National Native
American Veterans Memorial will officially (albeit virtually due to
COVID-19) open. The memorial has been in the works since 2013, when Congress authorized
its creation for the purpose of providing an educational opportunity for the
public to learn about the tradition of service of Native Americans in the U.S.
Armed Forces. A statement on the memorial’s website reads:

We are a nation of patriots who
believe in the United States, its democracy, and our responsibility to preserve
it for future generations. We acknowledge those who have served in the armed
forces as the greatest patriots of all. Though we celebrate those who dedicate
themselves to defending our nation, many Americans are unaware of the
exceptional service performed by American Indian, Native Hawaiian, and Alaska
Native veterans.

Employers have long recognized that U.S. military veterans
represent an important and ready talent pool. In addition to being highly
trained, veterans are steeped in collaboration, mission, and purpose. They also
represent a wide diversity of race, ethnicity, backgrounds, abilities, and
experiences, all of which bring immeasurable richness to the organizations they
join following their military service.

The Institute for Corporate Productivity’s (i4cp) case
study highlighting a visionary program developed by Microsoft to open
opportunities in high-tech employment to veterans and transitioning service
members is just one example of an employer that has dedicated significant
resources to preparing and hiring veterans. Beginning in 2013, Microsoft
Software & Systems Academy (MSSA) has provided the pathways and support
service members need to move into productive new lives and rewarding work as
trained technology professionals working in cloud development, cloud
administration, cybersecurity administration, or database and business
administration.

While unemployment among U.S. veterans of working age is
relatively low (5.9% in October 2020, according to the Department of Labor),
there is room for improvement in veteran hiring, most especially among veterans
of underrepresented groups, such as Native Americans.

According to the U.S. Department of Defense, American
Indians and Alaska Natives serve in the Armed Forces at five
times the national average and have served with distinction in every
major conflict for over 200 years.

Considering the population of the U.S. is approximately 1.4
percent Native and the military is 2 percent Native (not including those that
did not disclose their identity), Native
people have the highest per-capita involvement of any population to
serve in the U.S. military.

And while the majority of active duty military members is
non-Hispanic white, Black and Hispanic service members represent growing
cohorts within the armed forces.

Creating hiring programs specific to military veterans is an
increasingly common strategy for employers, and there are many resources
available for both employers and veterans, such as the Department of Defense
SkillBridge program, which partners with industry to connect transitioning service
members to career job training and reskilling opportunities within six months
of their planned separation from active duty (i4cp research has identified
reskilling employees as a practice consistently linked to better organizational
market performance).

The Department of Labor offers resources to employers, such
as the Veterans’
Employment and Training Service (VETS) program, which is committed to
helping veterans and separating service members by preparing them for
meaningful careers and providing employment resources. Their “Hire a Veteran”
page is a great place to begin for employers just getting started with military
veteran recruiting.

Employers that have the bandwidth to dedicate someone in
talent acquisition to focus on recruitment
of veterans see positive results, but simple strategies are effective
too, such as the creation of employee groups (ERGs/BRGs) for veterans, which
can help to engage new hires and also function as a source of referrals.

Making the hiring and development of U.S. military veterans
an integral part of diversity, equity, and inclusion efforts is a win-win for
everyone—and a demonstrable way for employers to recognize and honor the
service and sacrifice of veterans and their families while also strengthening
their organizations through the addition of highly skilled diverse talent.