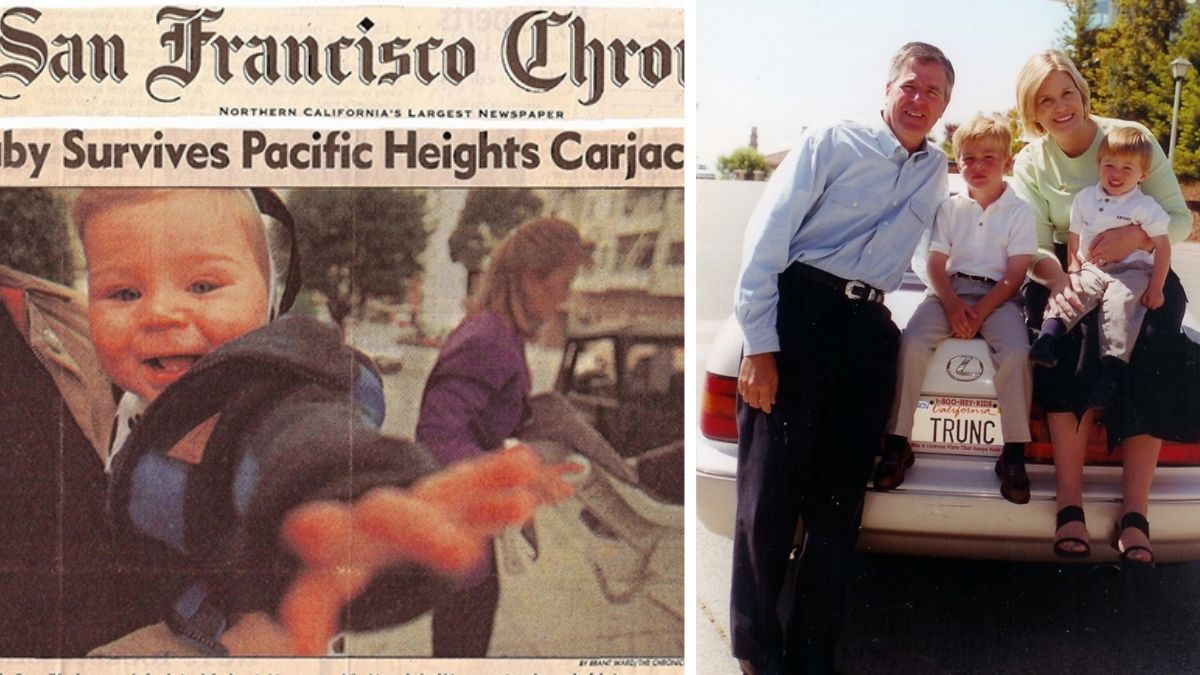 One woman used her terrifying car experience to increase safety for children worldwide.

Janette Fennell and her husband Greig were returning from an evening out with friends with their nine month old son Alex asleep in the back seat.

As they exited their vehicle, two armed intruders wearing ski masks emerged, forcing them into the trunk of their Lexus. The intruders got into the car and peeled off.

Unbeknownst to the Fennells, their son was alone in the front foyer.

As Fennell told The Hustle, things felt bleak trapped in the trunk.

“I remember thinking, ‘This is it — this is how it’s going to end.”

An hour later, the car came to a stop. The perpetrators took the couple’s money, jewelry and bank cards then slammed the trunk shut as they ran away.

Then, through what Fennell called “divine intervention’,” the couple managed to pry a strip of metal from under the carpet.

“Greig reached over my body, found this little cable, and pulled it,” she recalls. “The trunk went bink and opened up.”

The couple immediately called 9-1-1 and rushed home, where they thankfully found their son unharmed.

Although her life gradually went back to normal, Fennell kept thinking about how easily her trunk trauma could happen to somebody else.

“I got to the point of being angry. I started to think, ‘This is ridiculous. Why is there no way to escape a car trunk?’”

And so, in the months that followed, Fennell went on a one-woman mission to make emergency release latches mandatory for all vehicles.

She wrote letters to all major car manufacturers but received no reply.

Fennell then sifted through thousands of news articles and court transcripts (This was B.G, Before Google) to get more data on “non-traffic vehicle accidents”.

She uncovered hundreds of deaths from those trapped in car trunks, the majority of whom were children playing or kidnapping victims.

However, the biggest surprise was discovering that the automobile industry was aware of the problem but turned a blind eye because of profits.

“It had been brushed off by the auto industry for years. They just didn’t think it was worth the cost.”

To ramp up her efforts, Fennell launched the Trunk Releases Urgently Needed Coalition, or TRUNC.

Her efforts got the attention of state representatives. Ultimately, despite bellyaching from Big Auto, a bill was passed requiring that all new cars include an emergency trunk release.

Fennell has since become nothing less than a car safety pioneer.

She’s created Kids and Cars, a non-profit dedicated to raising awareness around children and vehicle safety. You can thank them for safety innovations such as rearview cameras and seatbelt reminders for backseat passengers.

It all started when Janette Fennell decided to not accept the status quo, and do everything possible to make the world a safer place.

The next time you notice a need for a change, remember that no one will make a bigger impact than you.

If You’re Feeling Judged: One Thing You Need to Understand
The Most Heartfelt Speech About Being Your Best | Gian Paul Gonzalez | Goalcast
Femcels: Inside the enigmatic subculture of involuntary celibate women
Deaf Domino’s Employee Delivers Pizzas on Foot After His Car Breaks Down – In Return, He Gets a “Tip” of $12,000
How a social media group dubbed Mom Jeans is helping people fight inflation