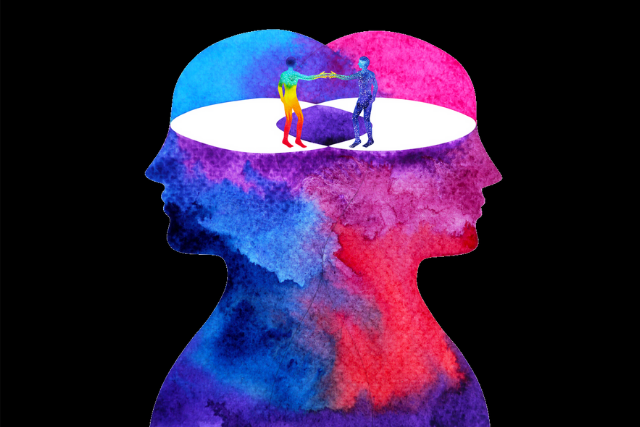 “Forgiving someone doesn’t mean that their behavior was ‘OK.’ What it does mean is that we’re ready to move on. To release the heavy weight. To shape our own life, on our terms, without any unnecessary burdens. Forgiveness is pure freedom—and forgiveness is a choice.” ~Dr. Suzanne Gelb

I was sitting opposite one of my closest family members. The irritation coming from me could almost be felt and touched in the room. One comment from him and boom, it was like pouring gasoline on a fire. I couldn’t help myself, I used to get so upset in these situations that I could barely manage them.

How could this happen? I was a grownup now. Also, I had worked on forgiving this person and moving past this. But then, why was I always falling back into old patterns?

Have you ever had one (or even several) of these moments? An infected relationship with a close family member that just can’t seem to heal? And you beat yourself up for not being able to resist getting into a fight?

Let me share my story. One of the closest people in my life when I was growing up was an alcoholic. That has been extremely painful. My childhood was amazing in many ways, but the fact that this person drank too much made the shiny surface fade.

Due to this, I’ve felt like a victim my whole life. Why did this happen to me? What did I do to deserve growing up with an alcoholic? Why did I have to battle embarrassment and shame because of something he did?

It all seemed so unfair.

During my childhood it was the same routine every evening: looking at the wine bottle that slowly but surely got more and more empty. Going to bed, carefully listening to sounds; was there an argument starting or not? Will there be yelling and screaming? Will I be able to sleep the whole night through?

I had so much resentment towards him. How could he do this to me and the rest of my family? His drinking and behavior triggered me in so many ways, and most of the time I felt disconnected, irritated and separated from him.

I wanted to be able to forgive and forget, and to move on, but how?

I tried to forgive him, believe me, I really tried. But at the end of the day, nothing changed. The anger, resentment, and sense of separation was still there.

But then one day something unexpected happened. I suddenly shifted my approach to forgiveness, and it was unlike anything I had done before. Finally, I set myself free. (I’ll explain soon how I did that).

What I realized was this: a shift within me, not him, had to take place. This shift was the key to my forgiveness, and in the below steps I’ll take you through how I did it.

1. I stopped thinking and started feeling.

I used to battle with the situation from my head. I tried to “trick” my mind to forgive and forget. But this strategy only kept me further from the root cause, and thus further away from liberation.

Eventually, I realized that I had to go deeper, to feel the hidden emotions underneath it all. I had spent so many years believing that I was angry, frustrated, and upset. My go-to state with him was attack, hatred, and resentment.

But underneath those emotions were the true feelings that I had not been able nor willing to feel. What I really felt was disappointment, hurt, and rejection.

Turns out it was easier to feel hatred and irritation than rejection and unworthiness. What I know today is that I couldn’t heal the situation from a place of anger and blame. I could only heal it by connecting to those deep and painful emotions that were hiding underneath.

At the time, I promised myself never to be vulnerable again. Unknowingly, at that point in time, I signed a lifelong contract of suffering. I built a thick wall around myself in order to protect myself. A wall between me and my family member (and eventually between me and other men).

But to forgive, I had to open up to vulnerability again. That was the door opener to true forgiveness. It is scary to go there, I know. But this is where the liberation lies. Go there, go to where it hurts the most and let these feelings come to greet you.

2. I connected with my younger and wounded self.

In the process of forgiving, one clear memory came back to me. It was the first time that I met him drunk and upset. I was fourteen years old and up until that point I had felt unconditionally loved. That night he said something that turned everything around. This was the painful night that changed how I viewed myself and our relationship.

Previously, I had been aware of this memory, but not willing to connect to my younger self. I had not been willing to hear her out. I imagined my fourteen-year-old self in my mind. I imagined her talking to me, telling her side of the story.

She put into words what I had truly felt that evening. All the suffering, feelings of rejection and unworthiness. Tears started pouring down my cheeks. I cried so hard. So much suffocated longing to feel love and connection revealed itself.

By listening to her and welcoming the painful emotions something powerful happened – I reclaimed my vulnerability.

Often, we fight so hard to keep ourselves from feeling the most painful emotions. But the fact is that they are the doorway to our liberation. We have to feel them to release them. In my experience, ignoring and pushing away painful feelings only leads to them controlling you even more. Only when you allow yourself to feel them are you able to set yourself free.

3. I realized everyone acts to the best of their ability.

I used to think this person did this because he was ignorant, insensitive, and selfish. But I couldn’t have been further from the truth. What I realized was that he acted to the best of his ability. I also realize that he, in turn, has his own trauma, tragic memories, and difficulties in life.

It hit me that I would have acted in the exact same way if I had his upbringing (his parents, experiences, and trauma etc). And that shift made it so much easier to forgive him. No one is perfect and neither am I. He did the best he could.

This is when I replaced anger with compassion. A wave a love washed over me, literally entering every cell of my body. In a moment I realized that this person had always loved me, and still does to this day.

This was when my triggers vanished. Left was love, empathy, and compassion.

This person isn’t perfect, and neither am I. I love my children more than anything in the world, but I also mess up. I’m also human. And not only does that insight make it easier for me to connect to my family member, but also to myself. I’m less harsh and judging of myself today than before thanks to that realization.

To me, the word forgiveness used to feel foreign. As something that was given to the perpetrator in order to create peace of mind for that person. I resented the word and the meaning of it.

But forgiveness is not about accepting or approving bad behavior. I can still forgive and objectively oppose certain behaviors. To me, forgiveness didn’t include approval of my family member’s destructive drinking behavior. Instead, forgiveness was an act of service to myself.

I learned that forgiveness is, in a positive way, an act of egoism. You forgive to set yourself free from chains of suffering and from the past. Years later I told him because I wanted to give him the gift of my forgiveness. But it was never a necessity. It’s now been four years and our relationship is better than ever before.

Make sure that you forgive, not to help someone else, but to help yourself. Give yourself the gift of letting go so that you can move into the future you desire.

Set Yourself Up for True Liberation

Living a life where you hold on to resentment, anger, and frustration toward someone is painful. Anger, bitterness, and resentment doesn’t change the past; it keeps you stuck in it.

You deserve better. You deserve to free yourself from grudges and painful feelings. Use this article as your guide to move into forgiveness. Start with one of the points above and follow the steps outlined. Don’t force or beat yourself up for not being able to forgive or heal straight away. Just by reading this article, you have taken a step in the right direction and have faith that your timing will be perfect for you.

Remember to feel, not to think, your way to forgiveness. Gather courage to go deeper, to feel the hidden emotions underneath it all. And most of all: remind yourself that this is something you’re doing for yourself, not for anyone else.

Our traumas and difficulties in life can leave us feeling hopeless, resentful, and like a victim. They can be our excuse to stay stuck and not create the life we desire. Or the painful experiences in life can be your greatest gift. By learning to forgive someone once and for all, you tap into the blessings in disguise that come with any problem.

Perhaps, thanks to your experience, you learned to tune up your emotional intelligence, empathy, and compassion. In short, make sure that your greatest problem becomes your greatest gift.

Slow mornings lead to deliberate days
Parents issue warning after teen dies from inhaling aerosol deodorant
This Year, Let Go Of The People Who Aren’t Ready To Love You
The Choice We All Have , But Only a Few Apply It | Joe Dispenza
Sweet Revenge: Woman Wins Lottery Jackpot After Husband Leaves Her for Best Friend