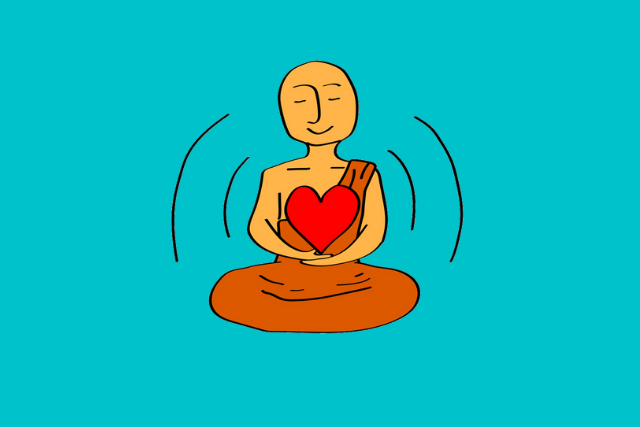 “All appears to change when we change.” ~Henri-Frédéric Amiel

The biggest life-changing moment in my life would have looked unremarkable to an outsider looking in.

I was at a point in my life (my late twenties) where everything seemed to look good on paper. I had a great job, I was living in downtown Seattle, and I enjoyed the live music scene. Aside from not being in a relationship, I thought I had “arrived.”

The only problem was, I was miserable, and I barely acknowledged it. A part of me knew that I wasn’t happy, but I tried to run away from that feeling by playing guitar, writing, or watching live music as much as I could.

My other avoidance tactics were working long hours at my day job or socially drinking at “hip” bars in the city.

But every time I came home, there I was. Still grappling with my feelings and trying to understand why happiness was so fleeting.

I had also recently broken up with someone that I cared about but knew was not healthy for me. She was a heavy drinker, and because I tended to just blend in with my partners, my drinking had increased substantially when I was with her, and I felt horrible (physically and emotionally).

It was a messy ending, and it left me even more confused. I should be so happy. “Why aren’t I?” This nagging thought haunted me for several months.

Moment of Awareness and Choice

One afternoon, I came home from work and mindlessly went through my routine. Dropped my bag off by the door. Changed into comfort clothes. Went to the refrigerator and opened a beer.

I then plopped on the sofa and turned on the television. This was my routine for several mind-numbing months.

When I reflect back on this moment, I can see that I was absently flipping through every channel available through the cable box. Interested in absolutely nothing. I would take a tug on the beer in one hand without even tasting it while changing channels with the remote in another hand.

I was literally in a trance and not really processing anything. I was running on autopilot, without any conscious awareness, as channel after channel flipped by.

And that’s when it happened. It was like the background noise in one part of my mind suddenly became amplified. I could hear thought after thought running through my mind like a CNN news crawl.

I also had the realization that I’d heard these thoughts before but had chosen to stuff them down or mute the volume through distraction.

But here they were. Loud and blaring. I was forced to face them once again.

I was in a state of disbelief for several minutes while some choice expletives escaped my lips.

Once the shock wore off, there was an overwhelming sense that I had reached a huge fork in the road.

One choice led to stuffing these thoughts back down to wherever they came from and going back to sucking down a beer mindlessly watching television.

And then, magically, a second choice came out of nowhere. Stop everything and just sit with these thoughts.

I remember simply saying, “Huh!” out loud. I never realized that I had choices. I was programmed to run and hide.

I became aware that this was a prodigious moment for me. I could feel chills run through my entire body.

The choice was: Go to sleep again or just be present and experience these thoughts.

Something deep within me knew which path to choose. It was the strongest sense of knowing I had ever experienced. I also knew that if I didn’t get on this train right now, I may be lost forever. It almost felt like a life-or-death decision.

It was in that moment of choice that I finally gave in. I stopped resisting and avoiding. I chose to sit in the discomfort and not run away and hide anymore.

The Choice to Pursue “Better”

As soon as I made the choice to stay and be with these negative thoughts, my body jumped into action. As if someone else was not at the controls.

In one long, swooping motion, I turned off the television, went over to the kitchen sink, and dumped out the rest of my beer. I then took a deep breath, walked to my living room, and sat cross-legged on the floor.

I’d never meditated before but had heard of it. I was strongly interested in Buddhism when I was in college but never took the steps to explore what it was all about. I figured there was no better time than now to just try it.

All I know was, in that moment, I made the firm decision that I was just going to sit and be with my thoughts. No matter how intense of a ride it would be or how crazy just sitting in silence seemed to be.

I still remember those first moments of being in silence. It was a bittersweet experience. The bitter side was experiencing all of the mean and nasty thoughts running through my mind at full volume. There didn’t seem to be an end to it.

But there was also a sweetness in the silence that was bathing my experience. There was a peace here that I had never experienced before. It was like being cuddled in a warm bosom, and I soon felt the negative words less scary to be with.

I can’t remember how long I sat in silence on that first day, but it was at least a couple of hours. I remember opening and closing my eyes several times. I was checking to make sure I was still in my living room.

It was like figuring out if you can trust wading into a lake you’ve never been to. Slowly, step by step. And certain moments I needed to take open my eyes and just allow myself to feel comfortable before going further.

There were also moments where I felt “myself” leave my body, which honestly scared the H-E-Double-Hockey-Sticks out of me. It was such a foreign experience. Even though I could feel some sort of a chord holding me to my body, I had never experienced being able to pop out and look down at my cross-legged self below. I was both intrigued and a bit freaked out at the same time.

But I then started to hear a different voice coming in. A gentler voice.  One assuring me that everything was okay.

I was guided to just be with the process and that I would eventually get comfortable and not need to pop out of my body. And for the first time in a long time, I started to relax.

Eventually, I noticed that by letting my thoughts just float through, they would start to fade away until there was just sweet silence, and then more thoughts would come back at a lower volume. I still had no idea what I was doing, but I was feeling better and that was all that mattered.

I didn’t realize it, but just sitting with my thoughts was making a statement. I was now broadcasting, “I want to learn how to be happy and more loving. I am not going to run away anymore.”

From that moment on, I came home from work every day and just meditated. I got rid of my cable box and allowed myself to be open to new opportunities. I was guided by a friend to hire a life coach and started to address things in my life that prevented me from experiencing happiness.

For example, I realized that I’d deadened my ability to tap into emotions because I worked in the aerospace industry, where it was all about facts and data.

By using my new friend, awareness, I started to identify emotions that I had never really processed, examined, or tried to heal. One particular healing moment was visiting the anger I held from going to an all-boys Catholic high school. I was one of the smallest kids and got picked on from time to time.

I didn’t even realize how much anger was simmering below the surface. It wasn’t until I was aware of it and then had permission to express my feelings, that I was finally free of my long-held anger about being teased and bullied.

I also faced the fear I’d developed after being in an airplane crash at nineteen and had a beautiful moment of release with tears flowing like the Nile. It never occurred to me that I held onto to so much trauma and that it was begging to be released.

The more I became aware of my past and released it, the lighter and happier I naturally became. I caught myself whistling to work one day, something that I hadn’t done in years!

I also got into Buddhism and energy healing and soaked in all forms of spirituality that interested me. It was a joyous time of learning and trying.

But ultimately, I knew that just learning was not enough. I needed to practice the ideas of love, healing, and forgiveness in the world.

“Leveling Up” with Awareness and Choice

When I look back on that moment where I finally stopped and chose a different way to be in the world, I recognize that was the most defining moment in my life.

Sure, I have attended many spiritual workshops, retreats, and trainings and have had “mountaintop” experiences. But they never would have happened if I hadn’t made the choice stop and be completely present with my thoughts.

Our minds are constantly in and out of awareness (awake) and unawareness (asleep). It takes diligence and practice to stay awake and to make loving choices.

Think about how much of your day you’re actually aware of your thoughts or habits vs. when you are on “automatic pilot” doing tasks or zoning out over social media.

Here are some ways to remain aware and at choice throughout your day:

Awareness and choice are a powerful duo that can change your life for the better. Both are needed. Awareness is taking in what’s present. Choice is taking steps to move your awareness in your intended direction.

Look to see where you can benefit from awareness and choice in your life. Then set your compass toward happiness and enjoy the journey!

Scott has been an intuitive coach for over sixteen years. He loves taking clients all over the world through a “soul” spa experience (vacation for your soul). He is also a certified hypnotherapist and an engineer in the aerospace industry which helps him to blend spiritual information with grounded and practical steps to move you forward in life. Scott offers life tips and session discounts to those who sign up for his weekly newsletter at www.oceanintuitive.com.

Deaf Domino’s Employee Delivers Pizzas on Foot After His Car Breaks Down – In Return, He Gets a “Tip” of $12,000
New Barbie Doll Honours First Black Aviator — Inspires Youth to Take to the Skies (PHOTOS)
Looking for love? 44% U.S. adults use dating apps to find long-term partners: study
Service Dog Stays at Hospital With His Owner 24/7 — While Nobody Else Was Allowed to Stay
How a social media group dubbed Mom Jeans is helping people fight inflation