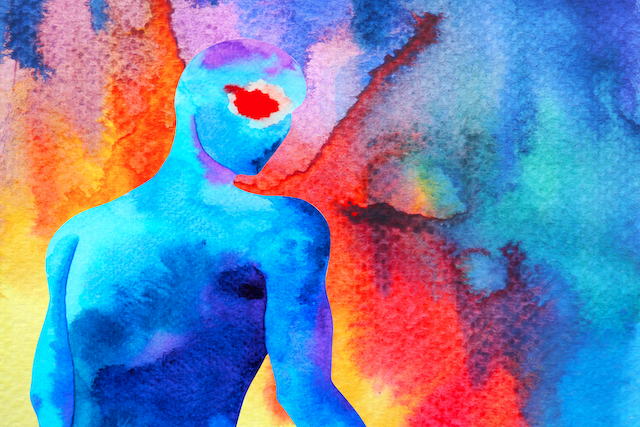 “Tears of despair can be fuel. Thunders of anger can be light.” ~Maxime Lagacé

This is going somewhere, I promise.

If you ever watch a rocket launch, you’ll see a large cylinder fall off once it gets to a certain height. Breaking earth’s gravity is not easy, so the cylinder is filled with a high-powered propellant that helps the rocket gain altitude.

The thing is, once all the propellant is gone, the cylinder becomes dead weight, so it has to be jettisoned. Otherwise, the rocket would fall back to earth, and all of that work would have been for nothing.

Now for an abrupt segue.

I entered my twenties as a very angry young man. I was angry at the world for being difficult and not doing what I wanted it to do.

I was angry with a lot of my close friends because they had the nerve to go on with their lives and do normal things like graduate college and have long-term relationships. They had even stopped drinking every day.

I was angry with my family and people who cared about me because they were always pointing out all the things I was doing that were not going to turn out well.

More than anything, though, I was angry with myself. My drinking and drug use were completely out of control, but I could not figure out what I needed to do about it.

I was angry with myself because I had dropped out of high school and then been kicked out of college a few times, and I had no idea what I wanted to do with my life. I wouldn’t have had the skill set necessary to do what I wanted even if I had known what it was.

There was this one James who wanted to do good things with his life and be responsible and all that good stuff. Then there was another James who always showed up and wrecked everything.

Good James was fighting an uphill battle because not-so-good-James could torpedo months of work with one decision. He was an elite assassin: one shot, one kill, and he always had my life in his crosshairs.

I couldn’t seem to get traction. I knew I was in a hole, but for some reason I kept digging. When I finally hit rock bottom, I decided it was time to get a jackhammer.

There’s a particular frustration with being a loser that’s hard to explain to people who’ve never been one. People look at you a certain way, people treat you a certain way. You tend to treat yourself poorly because it feels like you’re going to waste any opportunity that comes your way.

It’s frustrating and infuriating and debilitating all at once.

We could dive into all the reasons for this and the psychology behind it, but the simple fact was that I had just turned twenty, and I felt like I had already made irreparable mistakes. The consequences felt insurmountable.

After a few car wrecks and trips to jail, I moved to West Texas to try again. I was about to be a dad. I knew that things needed to be different, but I didn’t quite understand how to make that happen.

I talked a little bit about how going to the library and getting into things like meditation made a huge difference in another post, but I’m not sure anything changed my life as much as becoming a father.

Now, it shouldn’t be surprising for me to say that I was not the kind of guy you want caring for a baby. I was emotionally immature, entitled, self-destructive, and I had zero insight. And those might have been my better qualities.

I didn’t think about what I did as anything I was actually doing. It was just the way things were. My self-absorption was near 100 percent, so seeing outside myself was near impossible.

I remember holding my son for the first time and thinking, “I’m sorry, kid, but you got screwed in the dad lottery.” I’m not being self-deprecating here when I say that. He had gotten screwed in that lottery. But that thought was followed by another thought that I had never really had before: “What if I did something different”?

I had definitely thought about doing something different many times, but I’d never taken it seriously. People like me didn’t change, so it was always one of those thoughts that floats through your brain that you don’t pay much attention to.

I don’t know why, but this time was different.

A weird thing happened at this point. All that anger from being a loser for so long stopped paralyzing me and became rocket fuel for me to do better (I told you the rocket thing was going somewhere).

All those years of feeling like people were looking down on me and being told that I had potential that I wasn’t living up to, gave me focus and energy that I’d never had before.

I quit drinking and using drugs and burned through a bachelor’s degree in a few years. I even quit smoking cigarettes, which ended up being a lot harder than I thought it would be compared to everything else.

Through all of that, my desire to show people that I wasn’t a loser, my desire for the people who had looked down on me to see success and know they were wrong, drove me.

Crashing Back to Earth

Anger was a great propellant until it wasn’t.

Anger had driven me to make a lot of good decisions and invest in myself and do some things that were good for me, but all of these changes had also changed the world I lived in. I was now able to pass as a healthy person, so I was working and spending time in healthy environments.

I didn’t need all of that anger to keep driving me forward, and much like the empty propellant tank, it began to drag me back down.

I still saw most of the people around me as untrustworthy and threatening. I was militantly dedicated to protecting my time and making sure I took care of the things I needed to take care of.

If I’m honest, there was a deep fear that if I stopped sprinting forward, I was going to start sliding backward, and I’d be a loser again before I knew it. That’s one of the tough things about being a loser—I’m not sure the feeling ever goes away completely.

Looking back now, I can see where I alienated what would have been some good people in my life, and I was a more difficult employee than I needed to be. On top of this, other people could leverage my middle-finger attitude for their own good, and I made some decisions in my work that I regret now.

I would have treated a few people differently and handled quite a few situations with more respect if I had recognized that anger could no longer be the driving force in my life sooner than I did.

None of this is to say that anger is bad or that we should pathologize it or pretend like we don’t get angry. That being said, I don’t know that it’s ever the best option.

Everything I accomplished was within my grasp the entire time. Anger just gave me the motivation to do it. I wonder what it would have been like to go through college and make all the changes I made without the anger.

I would have had more friends, and I would not have pushed away some of the people who tried to help and mentor me. God forbid, I might have even enjoyed that time in my life.

The thing with anger is that it’s a secondary emotion. It never shows up on its own. I tell people that anger carpools, and it’s never the driver.

Anger is usually our attempt to take a vulnerable emotion and transform it into something a little tougher and more actionable. Things like fear, disappointment, sadness, rejection, and all those other icky, vulnerable emotions leave us feeling helpless.

Anger, while being destructive, can make us feel empowered and powerful.

This is especially true for men since we’re not really allowed to experience emotions apart from anger in any real way. I think we’re allowed to laugh at things and people, and we get to cry a little when our dog dies or something, but most of the rest is out of bounds.

There’s always something under anger. If you can see what emotion you’re actually experiencing, life opens up in a whole new way.

Looking back, I can recognize that I was anxious and fearful all the time but being angry allowed me to skip over those things and believe I was still in charge of my own life. If I got rejected or felt disappointed, anger would let me blame the situation, not myself.

I could get lost in complaining about all the things that should have been different or about why the other person sucked instead of allowing myself to feel those things, and maybe change the things about myself that led to them.

The ego fears change, and anger is a great way to keep us stuck where we are.

I don’t get angry a whole lot these days. Don’t get me wrong—it still arises, but I’m pretty good about identifying what’s actually going on and addressing that instead.

I don’t try to pretend that I don’t have anger, and I definitely don’t suppress it, but I try to allow it to be present without taking over the world. It’s the difference between anger being in the audience and it being the keynote speaker.

There are a few things that have been more difficult since I’ve started engaging things more honestly. Situations involving conflict or confrontation are a little scarier without my anger.

It was all definitely easier when I lived in a castle made out of middle fingers, but I’m also able to engage these things in a more honest way and learn from them. A castle protects, but it also isolates.

I don’t think that I experience more fear or anxiety than I used to, I’m just aware that that’s what I’m experiencing instead of being angry. This has made me a better friend, a better husband, a better father, a better son, and an all-around easier person to deal with.

I even like myself a little bit these days as well, which is nice.

Anything we are attached to can become a deadweight if we aren’t willing to cut it loose at the right time. Anger not only has the potential to drag us back down to the earth, but we’ll die in a fiery explosion as well.

We have to let it go if we want to break the gravity of all the things trying to pull us back down.

James has spent close to two decades helping people overcome challenges in their lives by offering tools and concrete practices that cultivate genuine change. James has worked as a social worker, counselor, and meditation teacher while continuing his own studies and practices for personal growth. To join James’ online community, click here to create an account and get free access to his vast resource library, which includes an introductory course to mindfulness, guided meditations, and eBooks.