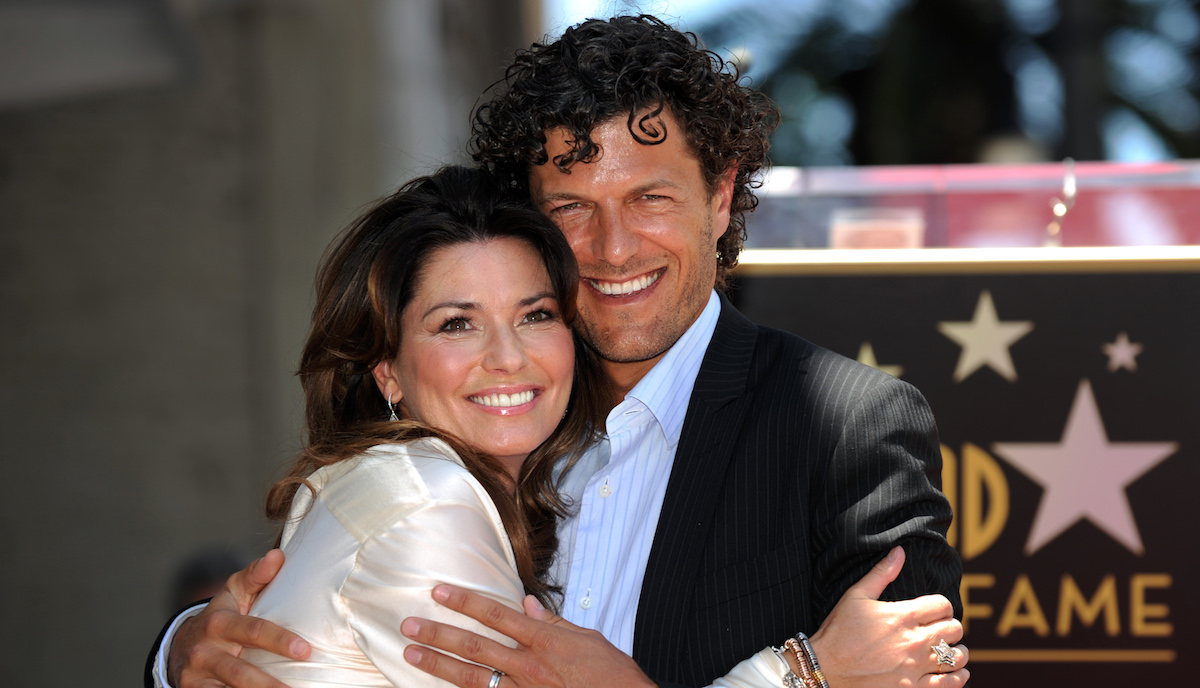 Shania Twain’s love story with Swiss businessman Frédéric Thiébaud stems from the unlikeliest of places. The couple has been happily married since 2011, but it was heartbreak that first brought them together. As the Grammy-winning singer has said, theirs is a “beautifully twisted” relationship — and she wouldn’t have it any other way.

Here’s what we can learn from Shania Twain and Frédéric Thiébaud’s surprising love story:

It was the late ‘90s and Shania Twain was living her best life. She was blissfully married to Grammy-winning producer Robert “Mutt” Lange (they tied the knot in December 1993) and she was at the top of her career. She and Lange had crafted three “monster-selling albums,” including 1997’s record-breaking Come on Over, which is still the biggest-selling studio album by a female artist of all time, as well as the best-selling country music album ever. The Canadian songstress also won five Grammys around that time and, in 2011, the couple welcomed son Eja (pronounced Asia). Then came the heartbreak.

Love can be an unpredictable roller coaster

Shania Twain was experiencing bliss in all aspects of her life when she contracted Lyme disease in 2003 after being bitten by a tick. The illness wreaked havoc on her career, causing vocal cord paralysis and forcing Twain into a 15-year break from music. Luckily, she had her husband and young son to keep her heart full, but soon, part of that support system crumbled away.

Twain and Lange took fans by surprise when, in 2008, they announced they were splitting up after 14 years of marriage. While Lange told People that the reason behind the split was “literally just a growing apart, that’s all,” Twain soon revealed a much more salacious truth.

As People first learned, Lange had apparently asked for a divorce (which was finalized in 2010)  without offering a real explanation. Later, Twain learned he had been having an affair with their personal assistant and her close friend, Marie-Anne Thiébaud. Although Lange and Thiébaud have never admitted to the unfaithful behaviour, Thiébaud’s then-husband, Frédéric, told Twain he had phone bills, hotel information, and receipts to prove the extramarital affair.

No matter how difficult things get, never surrender

At first, Shania Twain kept quiet. As one source told People, the infidelity was “a multiple betrayal because it involves all the people around her, the people she is closest to. She is in absolute, total shock,” the source added.

The blow was especially painful because she and Marie-Anne (who was hired to care for the couple’s 46-room château in Switzerland) were “very good friends.” They were so close, in fact, that Twain confided in Marie-Anne about her marital troubles and admitted she thought Lange was having an affair. Marie-Anne made Twain feel “foolish” for her suspicions, but of course, your gut will always tell you the truth and Twain’s instincts were correct.

Twain eventually opened up about the heartbreak in her 2011 book, From This Moment On. Writing that discovering the affair was “the most shocking and painful truth of my life since the death of my parents 20 years earlier,” she admitted that “for the first week after finding out about the affair, I was ready to die – to go to bed forever and never wake up. Or to hurt someone,” she continued, explaining, “I was ready to do something desperate, but in reality, there was nothing to do but to suffer through it.”

Twain also admitted to feeling “disgusted that another woman’s lust for a lifestyle upgrade was worth the devastation of my family,” but then she began to focus on what was most important: herself. à

I was in quicksand. I panicked, like everybody does, but I didn’t surrender. I found a way out.

Take time to grieve and process your emotions

Rather than pushing the pain aside or pretending the heartbreak didn’t happen, Twain faced the trauma head-on and worked through it at her own pace. “Despite everything, I still loved my husband. And I still loved my friend,” she admitted in From This Moment On. “I put myself in their shoes with the understanding that accidents happen, we’re all human, and we all make mistakes […] Eventually, I came to the point of accepting the end of my marriage.”

As part of her healing process, Twain also tried to let the people who hurt her know how she felt, but that didn’t go as planned. As she told the Daily Mail, she decided to confront Marie-Anne, but she “had a total panic attack. I just told her that she was a bad person — that’s all I could get out,” she revealed.

Don’t be afraid to lean on others

All along the way, Shania Twain drew strength from her young son. “Fortunately, when you’re a mom, the responsibility of caring for your child can keep you going,” she wrote in From This Moment On.

As she shared on The Kelly Clarkson Show, Eja helped get her through the divorce by giving her something more important to focus on. “You’re like, ‘No, I’m a mom. I’m going to do my best. I’m committed to this,’ and that is a very healthy — I don’t want to say distraction — but preoccupation that you love, and enjoy, and it does bring pleasure in your life,” she told Clarkson. “So, it just wasn’t always about me all the time, and that was very, very helpful.”

Another major source of strength was Marie-Anne’s husband, Frédéric Thiébaud, who was going through the exact same ordeal as Twain. He and Twain soon built a strong friendship and romance followed suit.

You can’t have the good without the bad

Shania Twain and Frédéric Thiébaud began dating in 2009 and, in December 2010, the singer announced their engagement, telling fans “I’m in love!” and explaining, “In the last two and a half years of adjusting to life after separation and divorce, I needed to lean on others more often than I was accustomed to.”

Frédéric Nicolas Thiébaud has been a true gift to me as a compassionate, understanding friend and over time, an amazing love has blossomed from this precious friendship.

Thiébaud gave Twain “a new lease on love” and although she was “worried about what people would think of the relationship,” she decided to follow her heart. They tied the knot in Puerto Rico in 2011 and, as Twain told People, “faith and love” have made their marriage work. “I’m so grateful I found the faith and courage to love again — because the last thing you want to do when you’re crushed is love again,” she told the mag.

When you have a great loss, you lose faith; you get very discouraged […] I’m really glad that that got turned around for me, and that’s what this relationship is.

And it wouldn’t have happened if it hadn’t been for the pain that preceded it. “You can’t have the good without the bad,” she told The Boot, later telling AARP magazine that her ending up with Thiébaud was “twisted, but so beautifully twisted.”

There’s no such thing as a picture-perfect relationship and sometimes, things don’t work out. The end of a union (especially one as long as Twain and Lange’s) is never easy and it’s important to take time to grieve, but it’s equally important to not despair. You have to work through the pain and not shy away from leaning on others when you need to. That’s exactly how Shania Twain was able to mend her broken heart and because life is an unpredictable roller coaster, she found love at the unlikeliest, most “twisted” moment imaginable.

Podcast: What to know about “novelty hunting.”
8-Year-Old Boy’s Family Is Down to Their Last $12 Living in a Shed – Until His Own Business Saves Them All
These Letters from a Single Mother Will Make You Believe in Love Again | Philicia Baugh | Goalcast
How To Find True Happiness | David Meltzer Inspirational Speech | Goalcast
The World’s Best Blind Mountain Biker | Brian Bushway | #shorts