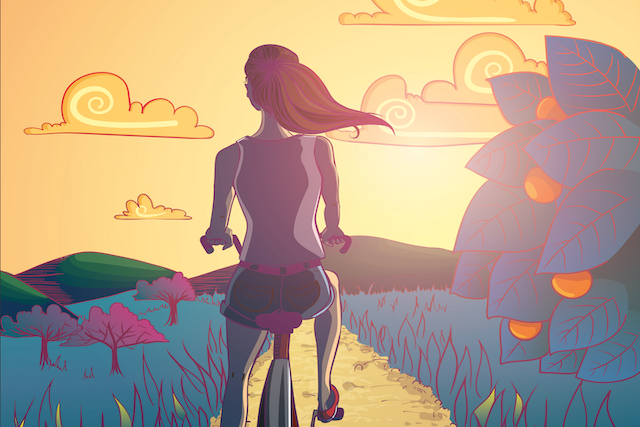 I have spent most of my life surrounded by people, which is probably why I never realized I was lonely. For the majority of my adult life, the only quiet times I had to myself were the very start and very end of the day. Otherwise, my mind was inundated with chatter, notifications, and distractions.

This constant noise let me mask the depths of my loneliness. I was bombarded with texts and distractions at all times, but I lacked deeper connections. As the years passed and I grew busier and busier, I found that I actually took steps to reduce my alone time. I’d watch TV until I fell asleep; I’d check my work emails first thing in the morning.

Looking back, the situation was obvious—I was terrified of being alone with my own thoughts—but at the time, I just thought I was being productive, or simply didn’t like being bored.

I didn’t realize my problem until my laptop suddenly broke. One chilly afternoon, when I was curled up on the sofa, ready for some New Girl, it unexpectedly powered off, and I was faced with my own reflection in the black screen. My phone was out of charge.

Without distractions, work, or social media filling up my mind, I came to the abrupt realization that, despite all my activities and invites, I was deeply lonely. And that was making me profoundly miserable without even realizing it.

That afternoon, I found out I was terrified of being alone. I looked at my relationship with myself and found it lacking.

The prospect of being stuck in my own company was so scary to me that it jarred me into action. I’d gotten so good at filling my mind with chatter, I didn’t know who I was when I was alone. I was definitely one of the many Americans who spend more than five hours a day on their phones, according to a 2017 State of Mobile report—never really alone, after all. But I didn’t know how to start being less lonely.

I didn’t want to only rely on others, so I made a plan to build my relationship with myself.

I decided then to be mindful about my intentional alone time. First, I figured out when I had space to be with myself. Then, I identified the times I found it hardest to be alone. Finally, I picked out the obstacles.

That left me with a solid three-point strategy: I had roughly three chunks of time during the day when I could have mindful alone time. My mornings and evenings were roughest for me. And my phone was the primary driver in stopping me from my goals.

My plan was to have three sections of alone time: active alone time, time meditating, and time doing something that didn’t involve a screen. But before I did any of that, I had to remove the biggest obstacle: my phone.

Even though it kept me connected to the world, it was holding me back from developing a deeper relationship with myself. I spotted that I used it most in the morning and the evening, so I invested in an old-fashioned alarm clock and decided on a strict no-screens-after-9:00pm rule.

Normally, my morning started with me staring at my phone’s notifications. Instead, I got up and went for a fifteen-minute walk in my neighborhood. At first, it was boring—I was desperate for distraction. But the more I did it, the more I found myself capable of noticing birdsong, thinking about my plans for the day, unraveling the tangled feelings of the day prior, and looking forward to my first cup of coffee.

I also worked in a five-minute meditation. At the time, meditation was new for me, so I figured that five minutes would be short enough for me to start getting into the habit. I quickly realized I needed to invest in an app to do guided meditation, which really helped me stay consistent and get actual benefits from it.

Finally, I filled my evenings with reading and painting. Both of these activities are manual, which meant that I couldn’t check my phone while I was doing them. I was able to rediscover my love of books, and while I’m not very good at painting, the process of producing tangible art helped patch the gap in the evenings when I normally would reach for my phone.

Research proves that loneliness is harmful for your physical and emotional well-being, but you don’t necessarily have to look outside yourself to cure your loneliness.

All my habit changes pointed to one final conclusion: You can’t depend on others to feel better about yourself. Learning to be okay with being alone was crucial to my journey with myself. You can’t begin to work on real relationships with others until you have a solid relationship with yourself.

For me, it took one crucial moment to bring home the reality of the situation. From there, I needed to actively carve out alone time—not just time without other people physically present, but time without distractions, notifications, phone calls, or emails.

Time that belonged just to me.

Finally, it did take tweaking. I tried to do it with my phone, but realized it was impossible, so I removed it. I originally tried to do a half-hour walk, but the time away from any devices stressed me out. When I began meditation, I thought I could do it without an app, but found I spiraled into negative thought patterns or fell asleep.

My point is, I didn’t get it right on the first try. The most important thing for me was that moment of realization. From there, I was able to keep trying until I found methods that worked for me. The results were amazing in the long run. I have a better image of myself, and I’ve found my relationships with others have improved.

Because I’m dedicated to feeling my feelings instead of drowning them out in a blur of notifications and escapes, overall, I’m more present and self-aware than I used to be, which helps keep me more self-accepting and centered. Nowadays, when things get rocky—and that does happen, as an unavoidable part of reality—I’m able to draw from my reserves and go with the flow.

It was uncomfortable, it was difficult, it was frustrating, but it’s definitely been worth it.

April Klooster is a wellness coach on a mission to help individuals lead healthy and fulfilling lives by developing strength of spirit and body. Based in Red Bank, New Jersey, she works with clients from all over the globe. You can reach her on Twitter: https://twitter.com/AprilKlooster

Uber Driver Donates a Kidney to His Passenger – Here’s Why He Insists It’s Not a Coincidence
7 Ways Childhood Trauma Shows Up in Your Romantic Relationships
Sweet Revenge: Woman Wins Lottery Jackpot After Husband Leaves Her for Best Friend
How to Make Things Better When It Seems Like Everything Is Going Wrong
This Is How You Become the Best Version of Yourself in One Step | James Lawrence | Goalcast