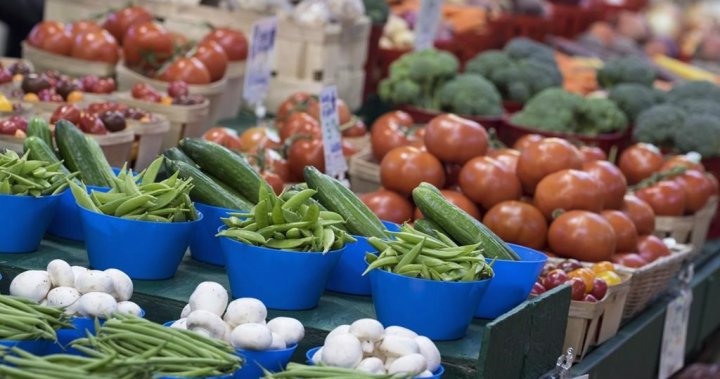 Even as food prices continue to rise in Canada, it is possible to eat healthy by looking for cheaper alternatives and dabbling more in plant-based diets, according to some experts.

As food costs have increased, some suggest more and more Canadians are opting to substitute one kind of meat for a cheaper option, or move towards a more plant-based diet.

“I think, honestly, you can save a lot of money if you (opt for plant-based alternatives),” Nicole Osinga, a registered dietitian based in Ontario, told Global News.

“I say plant-based all the way.”

According to the most recent Statistics Canada report, prices for food “rose less in October (+10.1 per cent) compared with September (+10.3 per cent) on a year-over-year basis.”

Prices for meat, fresh fruit and vegetables all saw some easing in price growth month-to-month.

But Statistics Canada noted that many staples saw major year-over-year hikes: the cost of dry or fresh pasta was up 44.8 per cent; margarine cost 40.4 per cent more; and soup was 18.4 per cent more expensive.


“There’s a false perception that healthy eating has to be expensive eating … and that just puts up barriers for people,” said Osinga, adding that there are ways to bring down food costs while focusing on making healthy nutritious meals.

A few of her tips include meal planning and being strategic about how to use certain ingredients to eliminate food waste.

“Have a few purposes for each ingredient … you’re not just going to the grocery store and just buying something that looks good,” said Osinga.

Some plant-based options that Osinga recommends, include “soymilk as a cost-effective alternative” and tofu, which is a protein-packed soy food.

While there are soy food alternatives like “soy bacon, ‘chicken-less’ nuggets, corn dogs, and hamburgers,” according to the University of California San Francisco health website, Osinga wouldn’t necessarily recommend them for cost-saving.

“I would consume more plant-based proteins like beans and tofu which are more cost-effective than (plant-based) meat,” she said.

According to Canada’s food guide, Canadians can find plant-based sources of protein at local grocery stores, includinh peas, lentils, peanuts, almonds and cashews that can serve as meat alternatives.

Another tip, Osinga says, is to take advantage of frozen food and canned produce options.

“They can certainly be healthy … we just have to watch for the low-sodium versions.”

Shopping for deals can be another way to find affordable and healthy meal options at less expensive prices, with some Canadians turning to couponing as a way to cope with rising costs.

0:50
Loblaw freezes prices on No Name products in bid to ease inflation at the grocery store


“Canada’s food inflation rate is the second lowest among G7 countries … so, in the grand scheme of things, we’re not doing too badly. But still, (the increase rate) is huge,” said Sylvain Charlebois, professor of food policy at Dalhousie University, on the Roy Green Show last weekend.

“It means that some products are much higher … and that’s probably what people are seeing right now because our food inflation rate has exceeded the general inflation rate for 12 consecutive months,” Charlebois added.

With that increase in mind, Charlebois says Canadians need to be mindful of good deals available at different stores, so he wouldn’t necessarily buy a prime rib for $200.

“You can find deals. You just have to be a little bit more careful … Some specialty shops will offer different prices,” said Charlebois.

Charlebois says the one thing Canadians tend to forget about high prices is that there are lots of different products in the market and people believe that if the piece of meat is very expensive, then it was produced in a very careful and specific way.

“It’s the specialized pieces of product that we just have to be a little bit more careful of. But there are some good deals out there. It’s just you just need to look around,” he said.


A 2022 study from Angus Reid Institute released in January found nearly 60 per cent of Canadians are struggling to provide food for their families. For many, when they can afford to buy food, they cannot afford to buy enough, or to buy the food they want.

A September study of 5,000 Canadians released by Dalhousie University also found that 23.6 per cent of the population cut back food purchases and 7.1 per cent skipped meals due to inflation.

Osinga says cheaper food alternatives are useful, especially during this time of the year when it’s cold, prices are high, and people are more drawn to having soup.

“You can easily pour a can of beans and then a few other frozen veggies into a pot or something and then create a really nutritious meal,” said Osinga.

However, for meat lovers who don’t want to buy plant-based proteins, especially for Christmas dinner, Charlebois recommends that Canadians buy turkey now because it’s likely going to increase in price due to the avian flu.

The Canadian Food Inspection Agency (CFIA) has stated it is currently responding to cases of H5N1 highly pathogenic avian influenza (HPAI) in farmed birds across Canada.

“There are over 60 investigations going on right now … and I actually think that the CFIA and provinces are actually managing the situation quite well. But we are still losing birds. So supply is going to be an issue and prices are going to go up,” said Charlebois.

If Canadians think turkey is too expensive, Charlebois recommends that they go for ham or pork.

“Pork is actually up only five per cent year to year. Pork is a good deal right now. So, I would certainly encourage people to look at pork a little bit more closely,” he added.

– with files from Global News’ Craig Lord and the Associated Press

7 False Beliefs That Will Keep You Trapped in Your Head Forever
Slow mornings lead to deliberate days
Detroit Couple Turn Vacant Lots to Bee Farms – Including the Childhood Home of One Legendary Rap Superstar
The Choice We All Have , But Only a Few Apply It | Joe Dispenza
This Is What Self-Care Really Means, Because It’s Not All Salt Baths And Chocolate Cake