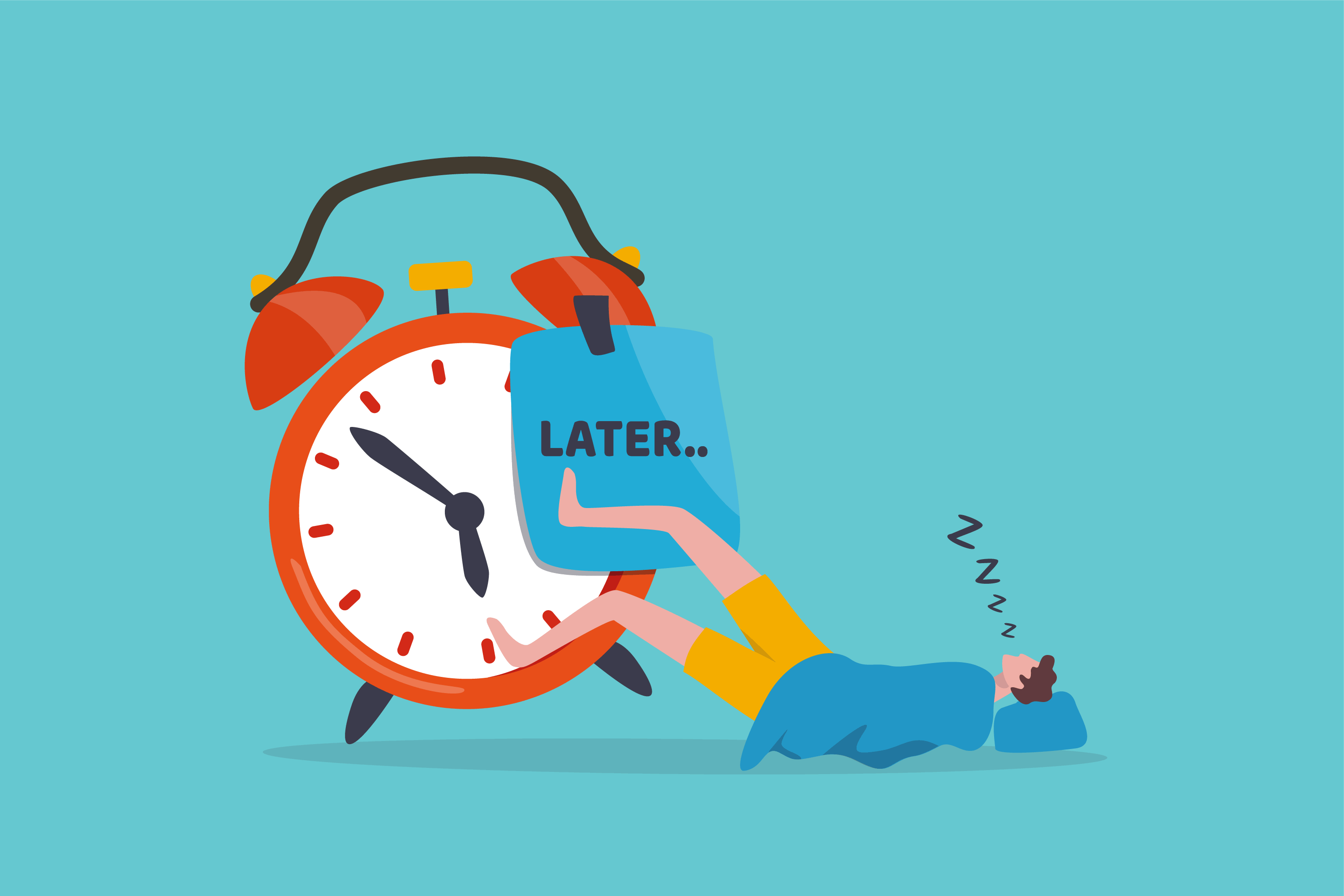 “You’ve been criticizing yourself for years and it hasn’t worked. Try approving of yourself and see what happens.” ~Louise L. Hay

I dreamed of starting my own business for years. Ten years, exactly.

While there are a few reasons it took so long to take the plunge, procrastination is at the top of the list.

It’s hard work to change careers, uncomfortable to leave a steady paycheck, and nerve-wracking to think of failure.

Even after spending months and years learning, studying, and getting certified, when it was no longer a matter of having the skills, the uncertainty of success was enough for me to keep kicking the can down the road to start marketing myself.

So I dragged my feet and kept passing my work off to “Future Me.”

I did this for everything, though.

“Tomorrow Sandy” can do the dishes. She’ll take care of scheduling that doctor’s appointment. Oh, and sign her up for that tough conversation I need to have with my mom too.

At one point I recognized that I often procrastinated because I needed everything to be perfect.

But, as you can see, I’ve come a long way from that version of me.

I’ve since started my own business (and I’m loving it!), and I’ve pulled my best tools together on paper for how to stop procrastinating—even though I actually procrastinated on writing this post (ironic, I know!).

Today, I didn’t let my fear of “good enough” hold me back from sharing actual, helpful advice and mindset shifts to get moving and stop staying stuck.

Because when we’re stuck, we start telling ourselves stories. So that’s where we’ll start, with this story we tell ourselves about why we procrastinate.

What We Think Procrastination Is

We have this misconception that procrastination is laziness.

But procrastination is an active process. You choose to do something else instead of the task that you know you should be doing.

In contrast, laziness is not caring. It’s apathy, inactivity, and an unwillingness to act. It’s an “I could, I just don’t wanna” kind of attitude.

But when you’re procrastinating, you feel even more stressed because you do care about getting the task done. You’re just avoiding stress and having difficulty with motivation.

Because that is why we procrastinate.

What Procrastination Really Is and Why We Do It

Procrastination is a stress-avoidance technique. It is an active process to temporarily avoid discomfort.

We subconsciously are saying, “Present Me is not willing to experience this discomfort, so I will pass it on to Future Me.”

The really cool news is that by working toward overcoming your procrastination habit, you’re building your overall resilience to distress.

That is how I define resilience: a willingness to experience discomfort.

Procrastination is tricky. Sometimes it’s obvious that we’re doing it. Sometimes we don’t quite realize it (like when I had to water the plants right then and there instead of writing this blog post).

So here are some examples:

Now that we know what it is and why we do it, let’s look at how to stop.

1. Motivate yourself with kindness instead of criticism.

What really holds us back from moving forward is the language we use when talking to ourselves.

This is what we think that drives us to procrastinate. I mean, really, when you read those thoughts, they just feel so demotivating, right?

This negative self-talk has a good intent. It is trying to save us from discomfort.

Unfortunately, it’s achieving the opposite because it adds to the stress by making us feel bad.

If you speak to yourself with kindness, just as you would a friend, it will feel so much more motivating.

That negative self-talk has simply become part of your procrastination habit.

Because that is what procrastination becomes—a habit—and habits are comprised of a cue, a routine, and a reward.

In order to break the habit and create a new one, you need to introduce a pattern interrupter.

Mel Robbins has a great one she calls the 5 Second Rule. When you think “I should do this,” before the negative self-talk starts in, count backwards, “5-4-3-2-1-GO” and move.

I find this helpful when I’m having a hard time getting out of bed in the morning.

If I’m having trouble getting motivated to do something difficult like write a post about procrastination, my pattern interrupter is “I can do hard things.” Not only am I interrupting the pattern, I’m motivating myself positively as well.

If I’m having trouble doing a boring and tedious task like my taxes, I use something like “I’m willing to be uncomfortable now so that Future Me can be at peace.”

One of the big drivers of procrastination is overwhelm. Overwhelm happens when we’re looking at a project in full scope, either not knowing where to start or feeling like all the work involved will be too much.

If the next task at hand is too big, or if you don’t know where to start, your first task really is to either 1) make a list, or 2) figure out the smallest thing you can do first.

The whole house is a mess? I bet you know where that one sock goes!

Another example, I had social anxiety and going to the gym was overwhelming to me.

So I broke it down into:

Honestly, I never turned around and went home. Because once I’d taken the small, easy step, the next small easy step was doable.

Which leads me to the next step…

Studies show that if we commit to five minutes only, 80 percent of us are likely to continue with the task.

Five minutes is nothing. You can do anything for five minutes.

There is an 80 percent chance you’ll continue working once you put in those five minutes, but even if you don’t, you’re still five minutes closer to your goal.

And, you’ve taken one more step to breaking the old habit of not starting.

5. Reward yourself or make the task more enjoyable.

Another problem with looking at a big task in scope instead of the next five minutes is that the reward is too far away or not satisfying enough.

When you’re trying to lose weight, twenty pounds is weeks and months away.

Or, when you’re putting off your taxes, if you aren’t expecting a return then the reward is “not going to jail.”

So bringing in more rewards sooner will fast track creating the new habit of getting started.

But also, making the task itself more pleasant will make it a less monotonous task.

What Would Open Up for You If You Stopped Procrastinating?

We spend so much more time avoiding the discomfort of a task than we do stepping into what it will be like once the task is complete.

If you were to stop procrastinating, what would open up in your life?

Procrastination is an active process to temporarily avoid discomfort (it is not laziness!)

By overcoming your procrastination habit, you are building your emotional resilience.

Notice the negative, demotivating self-talk and motivate yourself with kindness over criticism.

Create a pattern interrupter before the negative self-talk starts weighing you down.

Commit to just five minutes and you’ll either keep going to do more, or you’ll at least be five minutes closer to done.

Reward yourself or make the task more enjoyable so there is less discomfort to avoid.

Sandy is a former anxiety-riddled, insomniac stress-aholic turned coach. She helps career-driven women and working moms master their stress and anxiety, to motivate themselves with kindness instead of criticism, to face life’s challenges with Graceful Resilience, and to start truly enjoying life without all that unnecessary worry.  Her coaching and free resources like the Stress Detox Mini Course help women to take back control of their lives to live more fully and freely.

How a social media group dubbed Mom Jeans is helping people fight inflation
The Most Heartfelt Speech About Being Your Best | Gian Paul Gonzalez | Goalcast
If You’re Feeling Judged: One Thing You Need to Understand
8-Year-Old Boy’s Family Is Down to Their Last $12 Living in a Shed – Until His Own Business Saves Them All
How I Stopped Feeling Embarrassed and Ashamed of Being Single