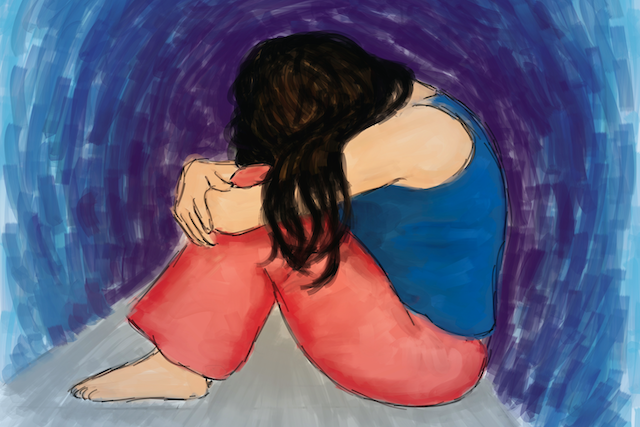 “Shame derives its power from being unspeakable.” ~ Brené Brown

I felt like a hypocrite. I would tell my nutrition clients to eat a salad with vegetables, then I’d go home and scarf down an entire pizza. After guilt and shame set in, I would purge and throw it up.

I think I became a nutritionist partly so I could better control my relationship with food. If I learned the secrets behind eating I could biohack my way to putting the fork down, losing weight, and finally being happy. This was back when I thought thinness equaled happiness.

It’s taken me over ten years to recover from an eating disorder. Years filled with perfectionism, shame, and isolation as I untangled that my worth is not tied to my weight. I share my story in hopes that it sparks a deeper dive into your own relationship with food.

Growing up I was an over-achieving, people-pleasing perfectionist. Which by itself may have been fine but, paired with a sexual trauma I experienced in early University, it was the perfect storm for developing an eating disorder.

I used food as a coping mechanism for the trauma I’d endured. It was a way to dissociate from having to feel the shame of being assaulted. I assumed it was my fault this terrible thing happened, and while eating as much and as fast as possible, I could numb out from strong emotions.

For a short period of time, I was worry-free.

But then inevitably came the guilt and shame—ironic, since I was trying to numb the shame of my assault with food.

Why did I have to eat so much? Now I’ll gain weight, and if I gain weight no one will like me. Why don’t I have the discipline to control my food? To control myself? I am truly worthless.

Somehow my brain had built the association between looking a certain way and being accepted, worthy, and even safe. Having a sense of control over what I ate and how I looked made me feel powerful in a way. And maybe subconsciously it gave me a sense that I could also control what happened to me.

I knew I needed help in University when after purging for the third time one day I had a sharp pain in my chest. Bent over the toilet, clutching my heart, I realized things had gotten out of control.

Luckily, before I lost my nerve, I set up an appointment with a counselor. And there began my long and twisty road to recovery from bulimia. A word I would rarely utter in the coming years, instead referring to it as my “food issues,” downplaying the severity of my illness. Bulimia was something only celebrities developed, not something a straight-A student like me could encounter.

Wow, was I ever wrong! Along this journey I’ve met many others like me, and I discovered we had more similarities than differences. We put immense pressure on ourselves to be perfect, had an insane need to control everything, and we all felt deep shame about our behavior. Many others I met had also experienced trauma and used food to soothe.

In 2008, when I first sought treatment, I worked in secret on my recovery, only talking with a counselor and a doctor. I needed weekly blood tests to ensure my electrolytes were balanced. Turns out purging is very hard on the body, something my lack of tooth enamel will attest to.

It was years until I told friends and family, and even now many will be shocked reading this article. It was easy to hide from roommates, as I would binge alone in my room and come up with creative reasons to use the bathroom when needed. Sometimes even purging into bags in my room then disposing of it later.

In 2013, after a few weeks of some particularly painful binging sessions, a doctor told me I had lesions in my throat. I could barely swallow, having to sip smoothies through a straw. And my first thought was:

Thankfully, it was followed by a second thought.

This is dumb. I’m putting my health at serious risk here… to be thin? That makes no sense.

That’s when I knew I needed to kick my recovery into high gear. I started out-patient treatment in Toronto and attended support groups with others like me. I learned to sort through complicated emotions and release my need for everything to be perfect. In short, I was on a great track.

But here’s the thing no one tells you about recovery—it’s not linear. I was settling into my career as a nutritionist, my binging episodes reduced, then someone would make an off-hand comment…

Wow, you cleaned your plate, you must’ve been hungry!

And boom, I would spiral out and feel compelled to rid myself of the extra calories. Secretly hunched over the toilet once again, knowing I had failed.

I didn’t think people would trust my nutritional advice if I gained weight. I was also a yoga instructor at this point and convinced students wouldn’t return to my classes if I didn’t have a lean svelte yoga body.

I continued the ups and downs of recovery for years. Having to choose recovery every single day was exhausting. Over time, the periods between binges got longer.

For me, there was no silver bullet cure. It was a combination of using mindfulness to sit with difficult emotions and getting a whole lot of therapy to address the trauma. I never thought I’d get to this place, but eventually I learned to see myself as a worthy person—no matter my past, no matter my size.

I used to think having an eating disorder was a shameful secret. Now I see that struggle as the source of my strength. It takes an incredible amount of courage to address trauma, and working tirelessly on recovery has taught me how to bounce back over and over again.

I went through the ringer for many years, having to hide many of my behaviors, and thinking my weight was the most interesting part of me. I share my experience as part of the healing process, to take away the shame that hides in the shadows. I hope it encourages you to examine your relationship with food and your body—and how you might also be using food or another substance to avoid dealing with your own traumas.

We tend to judge what we’re eating and think of food as something to be controlled, but eating disorders aren’t just about food. They’re a reflection of how we judge ourselves and our need to regain control when we feel we’ve had none.

If we can come out of the shadows and face our pain and shame, we can start to heal, but it might not happen overnight. It might be two steps forward and one step back, sometimes one step forward and two steps back—and that’s okay. People who struggle with eating disorders are often perfectionists, but we need to accept that we can’t be perfect at healing. It’s a process, and as long as we stick with it, we will see progress over time.

Now that I’ve worked through the pain of my past, I can finally see that food is something to be enjoyed and celebrated, and I too deserve celebrating, no matter my size. I don’t need to be perfect to be worthy. And neither do you.

Heather Lillico is a registered holistic nutritionist and yoga & meditation instructor. She helps overachieving, people-pleasing perfectionists find balance in their life. Heather knows it’s possible to break through anxiety and self-doubt and step into a life filled with confidence by incorporating nutrients to nourish your mind and mindfulness techniques to slow you down. For more info visit www.heatherlillico.com or follow her on Instagram @heather_lil

Tough Times Don’t Last (Official Music Video) Fearless Motivation
Kentucky Woman Gets Unbelievably Lucky at Her Office’s Christmas Gift Exchange — Now She Can Afford to Send Her Kids to College
If You’re Feeling Judged: One Thing You Need to Understand
Service Dog Stays at Hospital With His Owner 24/7 — While Nobody Else Was Allowed to Stay
New Barbie Doll Honours First Black Aviator — Inspires Youth to Take to the Skies (PHOTOS)