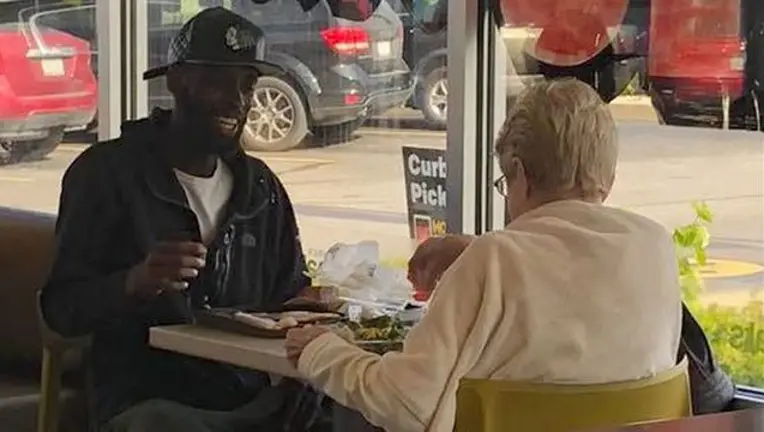 This festive season, everyone is full of love sharing kindness and joy with each other. It is joyful to share it with loved ones, yet it is blissful if we are kind, and courteous towards strangers too.

One father spent his entire breakfast talking to a lonely elderly woman at McDonald’s, and their meeting inspired change in many others.

Their unusual meeting might even become a long-term friendship.

Amanda Craft was having a meal with her colleagues at an Indiana McDonald’s. She witnessed an older woman and her series of interactions with others. At first, the old lady approached a bunch of teenagers to share a table with them.

The old lady named Jan, couldn’t seem to mingle well with the group. So, she frailly moved to the next table, where Eric Haralson was seated.

“She looked lonely and went up to Eric, sat the purse on the table. And, asked if she could sit and eat with him,” said Amanda Craft, who photographed the two strangers. “He (Eric) moved his food over and said, ‘Well, sure,’” Craft told Good Morning America.

Craft’s photograph and her Facebook post garnered thousands of reactions and responses for the sheer sweetness of the interaction.

“It struck a chord with everybody because you don’t see that. I think that’s what people are hungry to see is the kindness of others,” she added recalling the cute moment.

The Tale of Two Strangers

The two strangers in the photograph were, a 28-year-old, father from Nobesville, Indiana, and Jan, the older woman. Craft’s Facebook post went viral and Haralson’s friends notified him about this sweet interaction. Haralson was approached by GMA and recalls the incident with Jan. She asked to join him for breakfast shortly after she couldn’t gel with a bunch of teenagers.

“One of the kinds had a man bun and she was very intrigued by it. She asked what made him come up with that hairstyle…They didn’t talk to her that much,” Haralson recalls the first ice-breaking conversation he had with Jan. “She said, ‘What? did I scare them off? I said, ‘I guess you did,” he added.

This quick-witted fun start to the conversation led them to a 45-minute long talk. They spoke about their Sunday activities, personal, and family lives accompanied by giggles and smiles.

“She goes to church every Sunday, we talked a lot about that. We talked about my girlfriend, my kids, she did not have any kids or a significant other that she made mention of,” Haralson continued to recall the memorable breakfast.

Haralson wanted to do something for her, to keep reaching out to her every chance he can get. “I could tell she’s a firecracker. She will tell you exactly how she feels and has no problem being outgoing.”

They exchanged numbers. “I don’t know if she has anyone else in her life. I want to reach out to her as much as I can,” Haralson added.

Moments like this don’t come around enough, but we can all change that!

This Man Turned His Biggest Regret Into 1000 Acts of Kindness