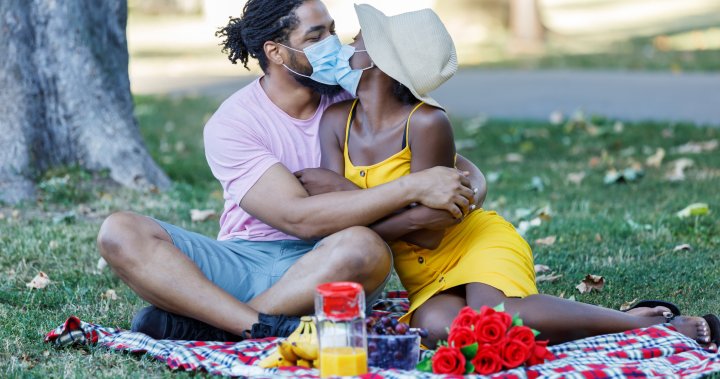 As the summer months draw near in Canada, so too does the hope of herd immunity, vitamin D, and potential romances.

After being pent up in our homes for months, pheromones will start — if they haven’t already — thickening the air as we walk outside, leading to prospective attractions. (Is everyone looking hotter or are we just feeling lonelier?)

Welcome to the hot vax summer.

Some people have formed romantic relationships over the past year, while others have been trying to navigate the dating realm amid a pandemic, which is anything but easy. Forget flashy jewels or filters, it’s all about flexing COVID-19 vaccinations on your Tinder profile because health and safety are sexier than ever.

Experts say that although many people will be attempting to find love this summer, they should be keeping in mind that we are still living in a pandemic. They’re optimistic that Canadians can use some of the wisdom we’ve learned over the last year when seeking potential partners.

We’re all a bit rusty at the moment when it comes to meeting new people, says Toronto-based psychotherapist and sex therapist, Kat Kova.

“Don’t be discouraged if you’ve lost your groove … and be gentle with yourself,” she adds.

Get ready for some new terminology, too: some people might experience FODA (fear of dating again), Kova says, because we have grown accustomed to being alone or being limited to our bubbles.

If you’re feeling a lack of confidence, remember that most people are likely feeling the same emotions and anxieties you are, she adds.

“But there’s also something to be said for just being authentic and saying, ‘These are the challenges I’ve had during this time,’” says Kova, adding that COVID-19 can allow us to be more open and vulnerable when we strike up a conversation. “It actually gives us a pretty good pickup line.”

Additionally, because conversations about viral transmissions and infections have been normalized, perhaps we can apply that to our sex lives, she adds.

Sexologist and relationship expert Jessica O’Reilly says though many singles miss having sex at the moment, make sure your comfort levels relatively align and you discuss them beforehand.

“If somebody’s going to pressure you into something on a first date, imagine what that’s going to feel like in a relationship,” she says.

The data revealed that one in five Gen Zers are “maskerading,” referring to people who pretend to care about COVID-19 safety precautions to impress someone.

Another trend is “folkloreing,” or being so focused on a fairytale romance that expectations don’t match reality.

“We’ve been trapped at home and we don’t just want something mediocre. We want everything,” O’Reilly says.

She adds that this is also a concern outside of a dating context, considering some people might have high expectations for what a summer of vaccinations might look like.

“It’s not going to be this immediate rollout and return to normalcy,” she says. “And parts of the world are still suffering.”

Read more:
What makes a relationship last in a pandemic? This expert has the answers

Sumi Siddiqa, a 24-year-old Scarborough, Ont. resident, hopes she’ll be able to meet people on patios this summer — considering Ontario, where she lives, has had tight restrictions — and she says the few dates she went on in the winter felt pointless and awkward.

“I told myself I’d wait until everything’s closer to ‘normal’ and see what happens,” she says. “But I’m not in a rush … and I’m not hyping up the summer because I feel like I’m going to be let down.”

6:57
Online dating red flags you should look out for

She says the pandemic allowed her to reconsider what she’s looking for in a relationship. She gave up on dating apps because of how convenient swiping “yes” or “no” became for her.

“I was focusing on the wrong things,” she says. “I realize I want something more long-term that sticks.”

Read more:
Fighting all the time? How to know if your relationship is worth saving

Early on in the pandemic, people began to prioritize who they wanted to focus their energy on and spend time with.

Though it’s possible some of the romantic relationships formed during the last year will fade — especially if lifestyles don’t align with a return to normalcy — O’Reilly says it’s more likely that these “turbocharged” relationships will outlast the pandemic.

“We’ve been purposeful about who we want to carve out time for,” she adds. “I think these relationships will just shift.”

Recognizing how someone perceives the pandemic and how they have acted over the past year is also a source of connection, with some people experiencing COVID-19-related-turn-offs.

For Mark Pagtakhan, a 31-year-old Edmonton, Alta., resident who is immunocompromised, safety and consideration are paramount.

He recently went on a date with someone who wasn’t diligent when applying hand sanitizer. He says his date was also annoyed when she was asked to put more on when going into different stores.

“I know that might not matter to many people, but I basically pulled the panic cord,” he says. “I couldn’t get over the fact that this (person) I don’t know at all could unwillingly be putting my life in danger.”

Read more:
The key to pandemic passion? ‘Get curious about each other,’ says relationship expert

For people who are eager to date again during the summer but are also feeling anxious, O’Reilly recommends setting time limits to your dates.

“Our regulation and interpretation of time have been thrown off over the last year. I think many of us are comforted by a start and end time to reduce some of the pressure,” she says.

“Also, we do not have to drop online dating,” she says.

Some dating apps, like Tinder or Bumble, have interactive features like trivia games, which can help you connect in low-pressure situations (unless you’re extremely competitive, then the pressure is on).

5:33
The most unusual relationship quirks

Kova says we should keep in mind that our fears around dating are also a reflection of our fears of new experiences and exposing ourselves to things that might take our lives down a different path.

“But people can lean into that because we also know that doing things that you might fear also has a huge payoff … in understanding ourselves better and the world.”

No matter what path you choose, remember to stay safe and take precautions, even if it is a hot vax summer.

Service Dog Stays at Hospital With His Owner 24/7 — While Nobody Else Was Allowed to Stay
Garmin Canada announces Alberta expansion despite other tech turmoil
Looking for love? 44% U.S. adults use dating apps to find long-term partners: study
Femcels: Inside the enigmatic subculture of involuntary celibate women
A More Colorful Approach to Meditation—Creating Your Way to Peace