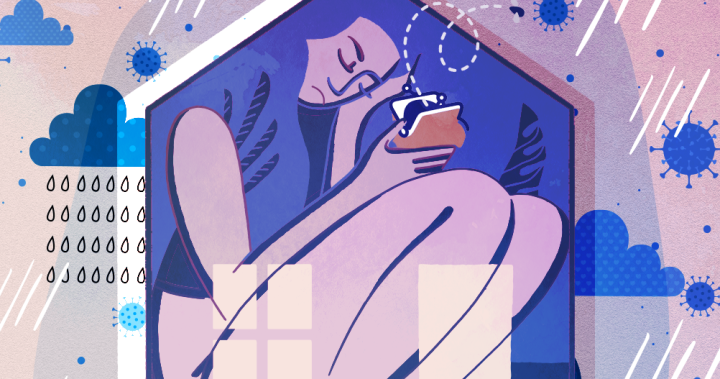 At the beginning of last year, Monika Zerbe moved into a one-bedroom apartment in downtown Toronto.

The 22-year-old was paying $1,450 a month for rent, something she thought was reasonable before the COVID-19 pandemic.

Read more:
Alone and Apart — Canadians are feeling lonelier than ever

She worked in the hospitality industry and when the pandemic hit, job opportunities slowly dried up.

Feeling lonely and dealing with financial distress, Zerbe moved back in with her parents in Guelph, Ont.

“I really got myself into the worst possible situation … Not only could I not afford to be here, I don’t even want to be here by myself.”

She started therapy because her mental health was deteriorating and her financial situation contributed to her anxiety.

It’s been a year into the COVID-19 pandemic and for Canadians living alone, this means increased financial stress and social isolation. People have had to stick to tight budgeting plans, apply for government assistance or move in with a roommate or family member just to get by.

People who live alone usually pay about 70 per cent of a couple’s expenses since rent and mortgage payments stay the same, Gagnon says.

“A lot of our everyday expenses are not cut in half because you’re single.”

In Toronto or Vancouver, where the real estate market is competitive and rent prices for one-bedroom apartments are the highest in the country, Gagnon says additional financial challenges might be faced by people looking to live by themselves.

6:11
Feeling lonely? Why winter months can be some of the hardest

For the first time in Canadian history, the 2016 census data found that one-person households were the most common in the country.

This increase is largely attributed to a shift in culture and attitudes — Canadians are marrying later in life, divorcing more frequently and living longer.

However, in a pandemic, which caused Canada’s employment to drop by 213,000 jobs in January, relying on one income is even more precarious than before.

Read more:
Alone in a pandemic — Relationships have become a ‘pressure cooker test’

Similar to Zerbe, Selena Luong, a 27-year old research analyst, moved back home to Edmonton from Calgary when she started living paycheque to paycheque.

Before the pandemic, Luong would take public transit to a grocery store farther from her apartment so she could save on money, but with an increase in COVID-19 cases in the province, Luong had to reassess her situation.

“Do I risk taking the bus and going all the way to Superstore? Or do I just walk five minutes to Safeway and pay double the price for cabbage?”

Read more:
If I live alone, can I see others doing the same during the coronavirus pandemic?

When the Canadian Payroll Association conducted its annual survey of working Canadians last September, it found that 37 per cent of Canadians are living paycheque to paycheque.

Though this number is the lowest reported in the 12-year history of the survey, the report still found that more Canadians were stressed about their finances.

Luong says she had been financially stressed and lonely before the pandemic, and started going to therapy more often.

Though the company she works for covers a portion of the costs of her therapy sessions, she still has to pay about $600 out of pocket each month.

“I wasn’t saving any money,” she says.

Since she’s moved back in with her parents, she’s been able to start saving, adding that she eventually wants to buy a house like many of her friends.

“They are all in long-term relationships so there’s that dual income,” she says.

“I don’t really think it’s possible as a single person.”

Noah Susswein, a registered psychologist at the Vancouver Psychology Centre, says people usually connect their independence with the idea that they’re striving.

“We think of having to share space again as an indication of us having failed to do something.”

He adds that the pandemic has created many grim and stressful situations and we need to remember that everyone is living under extraneous circumstances.


Government assistance during the pandemic

Many Canadians were faced with financial uncertainty at the beginning of the COVID-19 pandemic, hoping that government support would soften the blow. Now, as some people have exhausted their benefits, many people might turn to debt.

Of those people, 28 per cent said they would apply for Employment Insurance when their benefits ran out.

Gorgon says now that it’s tax season, people who claimed government benefits last year have to worry about being taxed on the amount they received.

Kerry Kijewski, a 37-year-old Woodstock, Ont., resident and a disability activist, has been relying on the Ontario Disability Support Program (ODSP) for more than a decade

Kijewski, who is blind and recently had a kidney transplant, receives just over $1,100 a month, well below Canada’s official poverty line.

When Kijewski heard about the CERB payments people could receive — which allows up to $2,000 for those who qualify — she felt as though Canadians with disabilities were unsupported.

“Being on limited income and social assistance … (and feeling) that I’m not worth as much as others — It keeps you in a bit of a downward state and feeling a lack of confidence in yourself,” she says.

A Statistics Canada survey released last year found 61 per cent of people with disabilities are struggling to fulfil at least one financial obligation, such as rent or prescription medications.

Her parents sometimes drop off groceries and help with mortgage costs.

“I have family I’m close with, (but) I still do feel lonely for a partner to go through all of these ups and downs in life with,” she says.

“During this pandemic, I’ve felt like I’m losing time and that it may result in me ending up alone forever.”

4:02
Money is the greatest cause of stress for Canadians: survey

Money is the greatest cause of stress for Canadians: survey – Jul 10, 2020

The COVID-19 pandemic has highlighted the detrimental effects of loneliness.

According to a recent Ipsos survey conducted exclusively for Global News, 54 per cent of Canadians have been feeling lonely due to physical and social distancing.

Additionally, 56 per cent of Canadians say they are feeling increased stress or anxiety.

Some provincial health guidelines now include exemptions for people living alone so they can combat feelings of loneliness and stay connected.

In Alberta and British Columbia, health authorities say people who live alone can maintain two contacts from a different household.

In Saskatchewan, people who live alone can meet with one household that has less than five people living in it.

Susswein says that loneliness and stress can go beyond negative mental health effects, manifesting themselves into physical problems.

“If you’re prone to having a sore lower back, for instance, it’s probably going to get worse if you’re worried about money,” he says.

Meredith Karcher recently went through a divorce and says she has been feeling lonelier than ever.

She tries to be proactive with her mental health and finances by reaching out to health services or financial advisors.

Read more:
How to save money on your utility bills and other expert-approved tips

Additionally, she bought her own apartment in the summer. The cost of her mortgage in comparison to the rental she was previously living in has saved her over $1,000 a month.

“Going from two incomes to one has definitely made a huge change in how I budget and prioritize things,” she says.

“When it’s cold outside, the thermostat has to stay at the same temperature and (I) put a sweater on versus just turning the heat up.”

Financial expert Preet Banerjee says that one of the biggest sources of financial stress is the cost of housing.

“We see a lot of couples stay together longer than maybe they would have because of the financial flexibility of having two incomes,” he says.

Karcher adds that she has some money put away for retirement, but nowhere near enough.

“I am also considering taking in a roommate, which is upsetting to me, but necessary.”


Staying on top of your finances

Gagnon says financial institutions have been more lenient during the pandemic because they understand why people are behind on their finances.

Banerjee previously told Global News that if things are getting dire, consider moving back in with your family, selling furniture or talking to a licensed insolvency trustee.

Also, he recommends creating a mini action plan or using a loan calculator like unbury.me to help pay off your debts.

Banerjee adds that if you can cancel subscriptions and find $83 per month in savings, that works out to $1,000 a year.

For Karcher, being aware of her finances and advocating for herself when she’s feeling down have helped her in times of stress.

“Mentally, I continue to use positive reinforcement — a coping strategy from one of my online counsellors — to help me through,” she says.

“I have a list of ‘truths,’ which include (me having) a roof over my head and am employed, and an action plan to help me work through a temporary financial setback.”