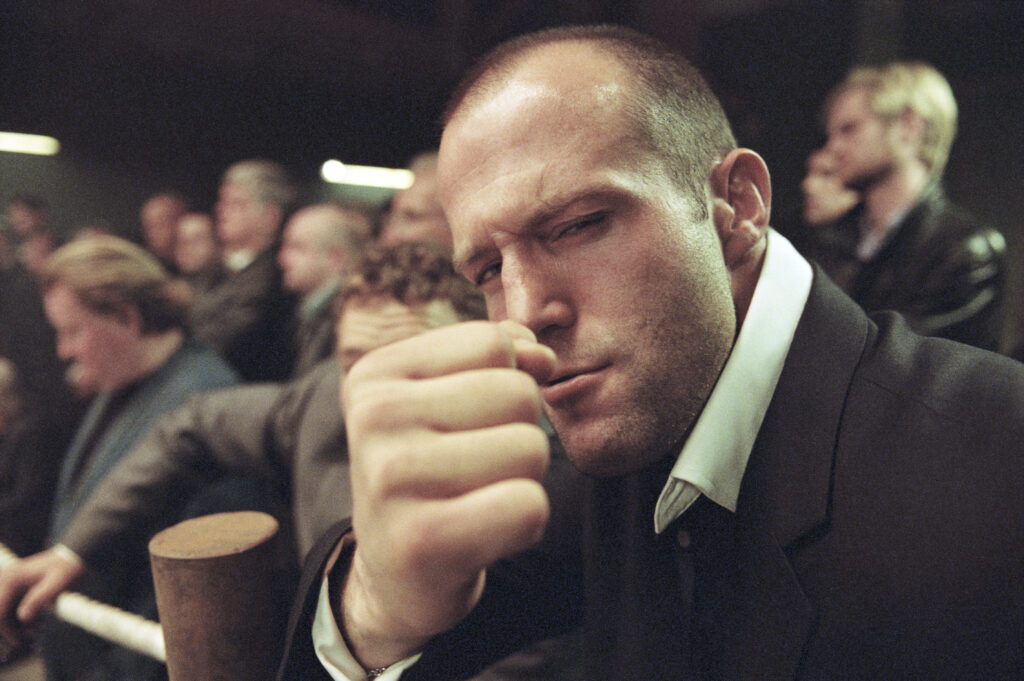 Jason Statham has built an entire career out of playing rough, rugged, bullheaded characters, from Frank Martin in the Transporter trilogy to Deckard Shaw in the Fast & Furious movies to Lee Christmas in The Expendables franchise. No matter the movie, you can always expect Jason to emanate a wild, aggressive, and macho energy. That’s precisely why his fans adore him.

In fact, he’s been the uncompromising hardman for so long that people forget that a charming human being exists behind the steely gaze. The typecasting doesn’t take away from the fact that Jason’s beginnings were as humble and human as anyone else. While he does share a few traits with some of his mighty characters, we should also remember he is his own man and shouldn’t be defined exclusively by his body of work.

Here’s what we can take away from Jason Statham’s journey:

Jason was born on July 26, 1967, to Eileen Yates and Barry Statham in Derbyshire, England. His mother danced professionally, and his father worked mainly as a street seller, peddling everything from jewelry to perfume to knock-off watches. Barry’s varied career also included stints as a house painter, coal miner, and the occasional singer.

Having grown up working-class, Jason followed in his dad’s footsteps. Hawking a mishmash of off-brand items to busy pedestrians is no easy job, but Jason took it in stride and used the opportunity to develop excellent salesman skills. “He smiles wide and winks often and periodically announces, “My name is Billy, not silly,” to comic effect,” read a New York Times profile of the actor.

Jason also leaned into his father’s musical background as a child and had been the drummer in their family band, with his brother as the guitarist and their dad as the lead singer. Though he dabbled in music occasionally, his true passion lied in the waters. Statham swam for his local grammar school team and demonstrated such a talent in competitive diving that he snagged himself a spot on Britain’s National Swimming Squad. He trained with the team for twelve years and was even chosen to be a part of the Great Britain contingent in the 1990 Commonwealth Games. He finished 12th in the World Championships in springboard diving. Jason said in an interview that his time as a competitive diver taught him “discipline, focus” and generally kept him out of trouble.

I get motivated by the sheer fact that I don’t want to go back to the f—king street corners and start selling watches again […] I like the job. I like what I’m doing. So if that goes away, it means I’m not motivated—I’m not working hard.

Though he excelled in competitive diving and had taken it seriously as a young man in his twenties, Jason realized that amateur sports didn’t come with a stable enough income to support him for the long haul. He went back to the streets as a vendor, “selling perfume and jewelry, and other goods that were supposedly expensive.”

The father-of-one said that his time as a hawker off Oxford street sparked a love of performance. Statham’s charming antics drew the attention of shoppers. For this reason, they were more likely to purchase items off his stall. One of his funny acts caught the eye of passerby Guy Ritchie, who became so entranced with Jason’s personality that he cast him in the film Lock, Stock and Two Smoking Barrels as no one else but a street hawker.

The rest, as we know, is history. Jason Statham was in his early thirties when he did his first movie — a departure from the majority of working actors who dip into the scene in their late teens or early twenties. But that didn’t discourage him from embracing the new opportunities knocking on the door. He jumped into the business and took it upon himself to make a name as an action star. Jason said that he dreamed of being a stuntman as a kid; becoming a dashing, daring actor was just icing on top.

I’m aware of what I can and can’t do. I don’t see myself as a character actor that spends months and months figuring out what to do. I’ve never had an acting lesson in my life. I don’t know whether that’s a good or bad thing.

Just because someone prefers a certain kind of role consistently through their career doesn’t mean that it reflects their real-life personality. Most people assume Jason Statham to be the gruff, surly, hyper-masculine figure when the cameras aren’t rolling, but his partner confirmed that he most certainly is not.

Rosie Huntington-Whiteley, the actor’s longtime girlfriend and the mother of his child, said that when they went on their first date in 2010, she had assumed that he would be as rough and tumble as his on-screen persona. Suffice to say; she was delighted to see him turn on the charm and offer up his romantic, fun side.

I remember calling my friend the next day and just being like, ‘Wow, he’s so unexpectedly not who I thought he’d be. He’s so grounded and humble, he’s really fun and charismatic and energetic.’

She also added that the humbleness in him hasn’t faded. Statham knows the “value of a pound” and is aware of how fortunate he is to be doing what he does. He spent the majority of his life scrambling to make ends meet; he worked as a painter-decorator, sold jewelry to busy shoppers in the heart of London, kept the peace as a bouncer of many nightclubs, even oiled up as a backup dancer for music videos — the actor knows what it’s like to truly work for a livelihood. Rosie hopes that his “groundedness” is instilled in their son as well.

Your time will come as long as you maintain drive

You never know when your big break is knocking on the door. You have to be patient and maintain the drive, knowing that the opportunities will present themselves at their own pace. And once they do, it’s up to you to take the wheel and jump. Jason Statham didn’t expect to be one of the biggest movie stars on the planet, so he kept working away at his day job and didn’t stop until something better came along.

It’s never too late to pursue your interests. Everyone’s lives move to a different rhythm, so you can’t compare yourself to others. All you can do is have a little faith and show a lot of ambition from time to time — your calling will reveal itself to you before you know it.