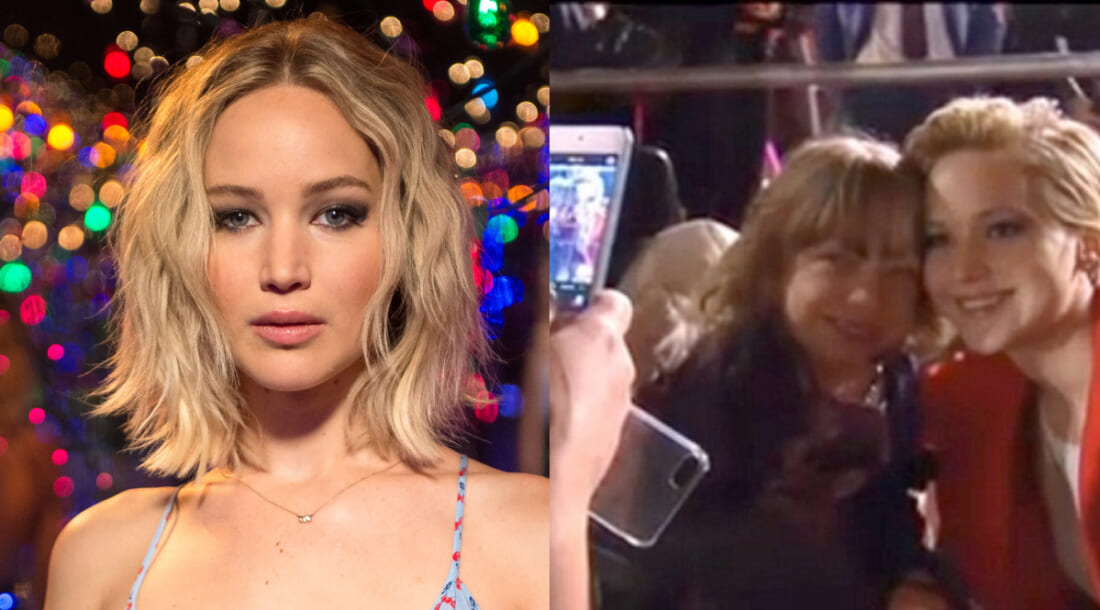 Jennifer Lawrence may be one of the biggest movie stars on the planet but she’s never too busy to do what’s right.

While promoting the premiere of her movie Catching Fire from the widely successful The Hunger Games series, Lawrence stepped off the busy red carpet to meet a fan.

Lawrence, then 23 years old, noticed a young girl in a wheelchair asking for her attention while crying.

The action star was about to conduct red-carpet interviews when she decided to make her way toward the girl.

RELATED: Jennifer Lawrence Reveals She Struggled Through School and Dropped Out at 14

The actress had her security move a barrier so she could get close to the young girl, and she immediately put her hands on the girl.

The young girl could be seen smiling as the superstar made her way over and crouched down by her side.

Later, Lawrence said she told the girl, “thank you so much for coming,” before asking her if was “excited to see the movie?” In the now-viral video, you can see the girl nodding to both questions, smiling ear to ear.

The Oscar-winning actress stayed with the young girl for about a minute, giving her hugs, kisses on the cheeks, posing for photographs, and giving her autographs.

RELATED: How Jennifer Lawrence’s Competitive Drive Got Her Into Trouble

No additional details were shared about the little girl’s name or why she was sad in the first place but what matters most is she got to enjoy some much-needed one-on-one time with the megastar.

As the video began to go viral, fans praised Lawrence for her random act of kindness and empathy.

One fan commented that Jennifer Lawrence is not just funny and beautiful but also a “genuine and terrific person.”

Several comments included people sharing that the touching moment made them cry and plenty of people commented on their wishes for more actors and actresses to use their platform and stardom to help make other people’s lives better.

RELATED: Jennifer Lawrence’s Husband Found Her When She Wasn’t Looking for Love

Lawrence has never been shy to speak out about empathy and the importance of confidence and mental health.

During an interview with Bill Whitaker of 60 Minutes, Lawrence once revealed that she dropped out of middle school at 14 years old, and never felt smart until she got into acting.

“I struggled through school, I never felt very smart,” she admitted, stating that reading movie scripts helped her feel smarter and carve her own path. “I am self-educated,” she added, “I wanted to forge my own path. I found what I wanted to do and I didn’t want anything getting in the way of it.”

It seems like the path she has forged here is simple: being kind to others.