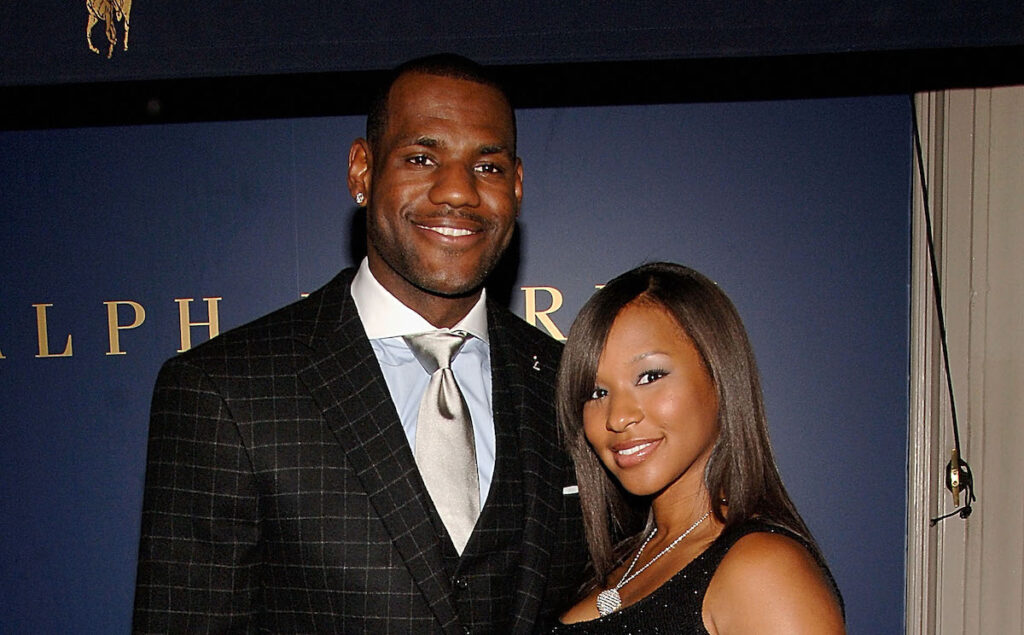 In 2002, Sports Illustrated dubbed a 17-year-old LeBron James (who was a high school junior at the time) a “prodigy,” noting he had already impressed “drooling NBA general managers,” “warring shoe company execs,” and “awestruck fans.” It didn’t take long for the Ohio native to live up to their expectations.

James went on to become a four-time NBA MVP and three-time Olympic medal winner, but despite his meteoric rise to fame, the basketball legend has had one constant in his life from the moment SI reported on his potential: his partner, Savannah Brinson.

It may sound implausible, like something that could only happen in a Hollywood rom-com, but LeBron James and Savannah Brinson have been together since high school.

It was 2002 when James (who was attending St. Vincent-St. Mary High School in Akron, Ohio) met Brinson (a student at neighboring Buchtel High School) during a football game. He was playing and she was a cheerleader and, next thing you know, James asked a 16-year-old Brinson to come watch him play with his other team. This time, they met on the basketball court and she was impressed. “I went and I was like, ‘Wow, this guy is pretty popular in here,’” she recalled.

Soon after that they had their first date at Outback Steakhouse and, nearly two decades later, they’re still together. As Vogue discovered in 2017, the NBA MVP even remembers what his future wife wore that night. “You had on a black-and-pink two-piece,” he said, reportedly “beaming.” He also admitted to “following the rules” and bringing Brinson home right on time in order to impress her father.

Speaking at the YWCA Circle event in 2017, Brinson fondly recalled their prom, laughing, “It’s true, I had the tallest date in school! And while I almost thought he wasn’t going to make it, LeBron has almost always come through for me,” she shared.

I guess you could say he was a pretty good date. After all, we’re still going on dates, three kids and more than 15 years later.

In 2003, LeBron James became the second-ever high school student to be chosen as the top pick during the NBA draft. He was selected by the Cleveland Cavaliers and, just like that, his history-making career began. He was dubbed King James and immense expectations were placed on his shoulders, so when Savannah Brinson learned she was pregnant, she freaked out. Luckily, her boyfriend knew just what to say and do.

“I was thinking, ‘What am I going to tell my parents? What’s going to happen to his career?’ I was very scared,” Brinson admitted. She was still in high school and the huge news left her “bawling. But he said, ‘It’s not going to slow me down, and it’s not going to slow you down. We’re going to keep doing what we have to do.’”

And he was right. Son LeBron James, Jr. was born in October 2004 and the couple went on to accomplish great things together.

Although Savannah Brinson is the first to admit she didn’t think her partner would become basketball’s GOAT:

I just thought he’d be a hometown hero for his era and it would be over.

But she never once faltered in her support.

When Essence called her “an integral part” of James’ success, she conceded, “I’m his support system with whatever he needs. If he needs someone to listen to him. If he needs to talk or if he says, ‘Hey babe, I’m tired. Can I take a nap?’ I will say ‘Yeah, baby. Take a nap,’ and keep the kids occupied,” she explained.

“It’s a part of the role that I play as the mother of his kids and being his wife,” she continued.

The balance that I create in our house is for his success. He is very busy and I understand that, and the kids are at the age now that they get it. Being there for him is a huge part of his success.

Being supportive has also meant that Brinson is the go-to disciplinarian for their three kids (son Bryce Maximus joined the family in 2007 and daughter Zhuri Nova followed in October 2014). As James told Vogue, “I’m gone a lot, so she is the boss of the household; she’s the rule-setter. It’s hard for me to go on the road for two and half weeks and then come home and tell my kids, ‘Look, this is how it should be done’ when she’s been home every day,” he noted. And as Brinson told the mag, she’s cool with that. “Yeah, don’t come home throwing monkey wrenches in the operation!” she laughed.

Years of shared experiences have formed an unbreakable bond

LeBron James proposed to Savannah Brinson on New Year’s Eve in 2011 at a party in France in front of his teammates. As he later told Oprah, popping the question “felt like before a finals game,” but although he was “nervous,” he was sure Brinson was The One because of everything they’d been through.

“I had been thinking about it for a while but it just came to me one day,” he recalled.

I was like, this is a part of growth for me. This is the lady and the woman I’ve been with through all the good and all the bad. She’s been there for a long time and I wanted her to continue to be there with me, so I felt like at that moment it was time.

The high school sweethearts tied the knot in September 2013 and their bond has only continued to grow stronger. In addition to supporting each other and embracing all aspects of raising a family — the birth of daughter Zhuri Nova made James “a better person; a more dedicated person; a stronger person” — their shared passion for community is yet another thing the lovebirds have in common.

Born and raised in Akron, Ohio, James and Brinson now own a 30,000-square-foot mansion in their hometown and they’re devoted to helping their community in any way they can. The LeBron James Family Foundation, for example, which was founded in 2004, focuses on providing kids in Akron with everything they need to succeed in school. In 2012, Brinson also launched I PROMise, a program that offers prom dresses to students who can’t afford them, and in 2017, she started Women of Our Future, a mentorship program for high school girls.

It’s not often you hear of a couple meeting in their teens and growing prefectly in tandem as they mature and change as individuals (especially when you throw fame into the mix!), but LeBron James and Savannah Brinson are proof that you really can meet your match at any point in life. It’s the way you tackle the wins and losses that come your way which will determine your success as a couple. By always putting on a united front and being there for each other, James and Brinson have withstood the test of time. As the mama of three once gushed, “I just love him so much. We’re soul mates.”