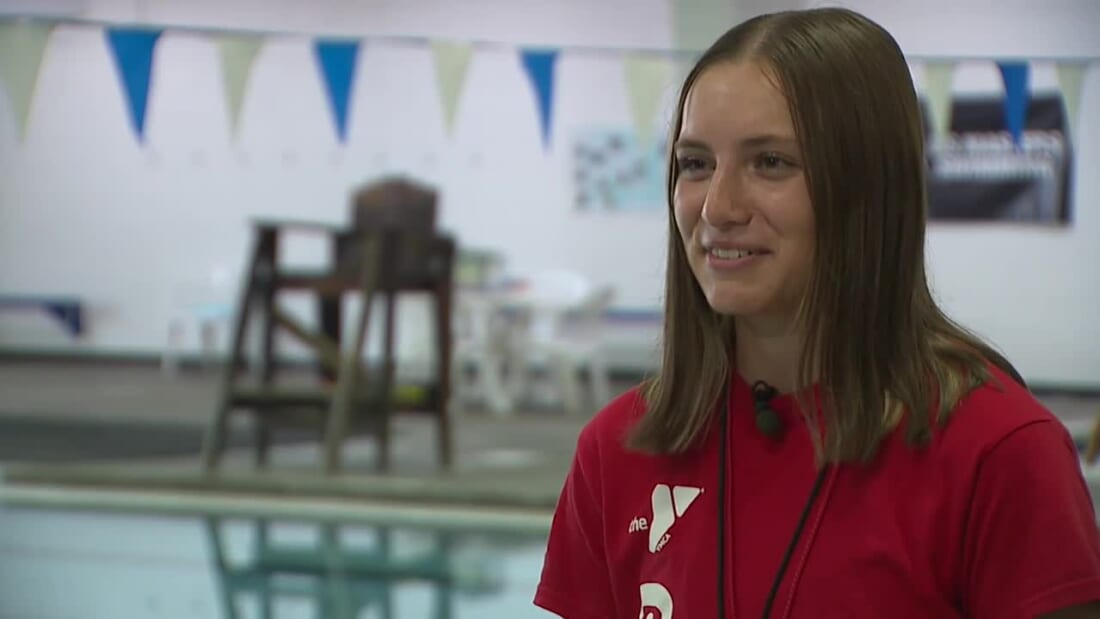 Lifeguard training is extensive. Over two years, trainees must learn how to swim 100 yards continuously, dive into a pool’s deep end to retrieve a ten-pound brick, use a variety of rescue equipment, and more.

Eighteen-year-old Natalie Lucas already had three years of lifeguarding experience under her belt when a very unexpected situation arose at work. Lucas was about to experience a career first—and perhaps last.

Not Something She Was Trained For

Natalie Lucas never thought that delivering a baby on a pool deck would be part of her duties when she started working at the YMCA in Longmont, Colorado. She certainly didn’t get that training. But a lifeguard has to be alert and ready to tackle any situation that arises, especially since being in and around water has so many inherent dangers. So Lucas insists that she was just doing her job that morning in June when Tessa Rider and her husband Matthew Jones walked onto the pool deck.

Rider had been there a few days that week. She was past her due date and feeling very uncomfortable. She and her husband hoped a swim would help with the pain she was having in her hip. Being in the water was the only thing that seemed to help.

Although she was overdue, Rider did not expect to go into labour that morning. In fact, her anticipation that the birth would be any day now was starting to fade. She had had three false alarms that week, and there was no reason to think that today would be any different. She and her husband had taken to going to the pool to wait out the time a little more comfortably.

She Noticed a Swimmer Struggling

Perched high on her lifeguarding chair, Lucas kept a watchful eye on the pregnant woman and soon noticed that something was different. Rider was struggling with a pool noodle and trying to get out of the pool. Lucas jumped down and made her way to the woman. Rider’s water broke right before her eyes.

“We’re having the baby right now!” Her shocked husband cried.

“Adrenaline kicks in right then and there,” Lucas related after the event. She said that many people have told her since that they wouldn’t have known what to do in that situation, but Lucas never froze. “I just did what I was supposed to do,” she shrugged.

RELATED: Lifeguards Personally Carry 95-Year-Old Woman To Make Sure She Can Enjoy The Water

She Springs Into Action

Even though she admits that she was “freaking out a little bit,” Lucas sprang into action. Jones had grabbed his cell phone and called 911, but Lucas could see that it was too late for that. Rider was already taking off her swimsuit. To everyone’s shock and disbelief, the baby was crowning.

The expecting parents remained calm, though, which helped Lucas to steady her own nerves. “I made sure to keep my head on and stay with them, keep asking them questions, keep them focused on the baby.” She did her best to make Rider comfortable, grabbing towels and other supplies and coaxing her away from the water’s edge. Then she called the front desk for more assistance.

A Miracle on the Pool Deck

But the baby wasn’t waiting. Less than five minutes later, Matthew Jones caught his son, right there on the deck of the YMCA pool. Tobin Thomas Rider came into the world safe and sound. “It was pretty insane,” Lucas admitted.

Still on the phone with 911, the couple received instructions on how to keep the baby warm and make sure he was breathing. While Jones took care of the baby, Lucas focused on Rider.

“I liken Natalie’s presence to like a doula or a midwife,” Jones said. “She was super focused on Tessa, so in that moment, I did not have to worry about my wife. I could direct the entirety of my focus onto Tobin and what Tobin needed to be safe and healthy.”

So what now of this baby, born into the echoing chaos of a public pool? “He’s just a cute little guy, really relaxed,” his father said.

“I’d like to keep in touch,” said Lucas. She plans to send the little guy a card every year on his birthday to commemorate his dramatic entrance into the world.

Lucas says it’s all in a day’s work: “I did what I was supposed to do in that situation.” Her quick thinking that day in her role as a lifeguard helped save a life—or two.

“It’s definitely something I will never forget and I will tell the story many years in the future,” Lucas said of that unusual and unforgettable day. “But this experience has definitely opened my eyes. [I] realize just how amazing women can be.”

RELATED: Lifeguard Fired For Saving A Life Gets Incredible Reward After Public Outrage

Gary Vaynerchuk’s Life Advice Will Change Your Future | Gary Vaynerchuk Motivation (Gary Vee)
Uber Driver Donates a Kidney to His Passenger – Here’s Why He Insists It’s Not a Coincidence
This Year, Let Go Of The People Who Aren’t Ready To Love You
Deliveryman Arrives to Pick Up an Order From a Bakery – Breaks Down When He Finds Out Why His Own Name Is on the Package
Slow mornings lead to deliberate days